A fentanyl dealer with mob ties who bragged about bringing crack cocaine to Hamilton has been sentenced to 16 years in prison after a cross-border police operation that infiltrated organized crime in Canada.

Despite the severity of his offences, Giuseppe (Joey) Violi, 48, received glowing character references from the head of the local paramedic union, a hospital manager and even a priest.

Moments before he pleaded guilty on Friday in a Milton, Ont., courtroom to conspiring to import cocaine, trafficking cocaine and trafficking three kilograms of the deadly opioid fentanyl, the handcuffed father of four leaned from the prisoner’s box to give his youngest daughter – born just days ago, while he was in custody – a kiss on the head.

Project OTremens, a years-long investigation led by the RCMP, resulted in the arrests of nine alleged organized-crime members last November and the seizure of more than six kilograms of the opioid drugs fentanyl and carfentanil.

Mr. Violi’s brother, Domenico, 52, is also charged in the case. The brothers – both from Hamilton – are the sons of former Montreal mob boss Paolo Violi, who was murdered in the 1970s.

Ten letters of support submitted on Mr. Violi’s behalf paint a portrait of a loving family man and dedicated community member who donated to charity and sponsored kids’ sports teams.

In addition to testaments from family, character references were also submitted by Mario Posteraro, the head of the paramedic union in Hamilton, and David Anthony DiSimoni, customer-support site manager for Hamilton Health Sciences, a network of local hospitals.

Mr. DiSimoni wrote that Mr. Violi, as manager of UNICAN Linen and Laundry Services, was contracted 15 years ago to be the laundry-service provider for Hamilton Health Science’s five hospitals.

“I would characterize Joey as a very generous man, as evident through his involvement and support in many hospital fundraising events through his affiliation with UNICAN,” Mr. DiSimoni wrote. “Joey is truly an individual who cares for those who are less fortunate.”

Mr. Posteraro – who notes that he represents “in excess of 500 paramedics” across Hamilton and Brant County – referred to the “professional service and trusting relationship Joey has cultivated with hospital management over the years.”

“Joey has never said ‘No’ to a request made of his time,” he wrote, adding that he provided the character reference “with pleasure.”

He referred to himself in his letter as a “personal and family friend” of Mr. Violi for 28 years, and was seated in court with the family on Friday.

However, an agreed statement of facts – which details a plan between Mr. Violi and an associate to import hundreds of kilograms of cocaine from Colombia – makes it clear the defendant was straddling two worlds.

Prosecutor Tom Andreopoulos argued on Friday that while Mr. Violi claims to have been a positive member of his community, he “is dedicated to and responsible for the unravelling of that very same community.”

In a March, 2017, conversation with a police agent, Mr. Violi bragged about bringing crack cocaine to Hamilton.

“You were dealing crack too,” the agent, a trusted associate and member of the New York-based Bonanno crime family, asked, according to a transcript.

“I’m the first one,” Mr. Violi replied. “I was bringing the liquid in and turning into powder … crack.”

“A lot of people here were crackheads?” the agent asked.

“Oh, after a year, me bringing … you should have seen the city,” Mr. Violi said.

Mr. Violi was found guilty of conspiracy to commit an indictable offence in 1996, and was sentenced to seven years and 10 months in prison for conspiring to import cocaine. In 1999, he was convicted of mischief under $5,000, after which his record was clear for almost 20 years.

On Friday, his wife Stephanie was teary-eyed as her husband was led out of the courtroom, promising their children, all of whom are under the age of 4, that they would go see him the next day.

She wrote in her letter of support that his chair sits empty at their dinner table.

In his letter of support, Catholic priest Rev. Francesco Cucchi said: “I know that this family Violi has a bad story in the past, but he seemed to me a good guy.

“Sometimes maybe too extrovert, but not bad.” 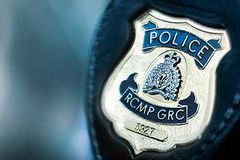