Apple Inc. is pushing deeper into health tracking in Canada, adding new features to its smartwatch that alert users if they appear to have a potentially dangerous heart problem and that allow them to take a snapshot of their heartbeat to share with a doctor.

The updates are part of continuing efforts by the Silicon Valley giant to expand its Apple Watch beyond fitness tracking into health care.

Medical experts say wearables such as the Apple Watch could alert more people to serious problems before they have symptoms and help patients better track their health conditions. But they also warn that false alerts from smartwatches risk scaring otherwise healthy consumers, adding to an already overburdened health care system by encouraging people to seek unnecessary treatments.

Apple launched two new features in Canada on Monday through a software update for the Apple Watch. The features received Health Canada approval earlier this year. They were released in the United States in December and in Hong Kong and 18 European countries this March.

One is an irregular heartbeat notification, which uses a pulse sensor built into all Apple Watches to alert users if they have symptoms of atrial fibrillation, a potentially dangerous heart-rhythm disorder that often has few symptoms. It affects an estimated 200,000 Canadians and can lead to stroke.

A second new feature lets users take a 30-second readout of their heartbeat known as an electrocardiogram (ECG), which they can share with their doctor. It works only on the Apple Watch 4, the most recent release.

Apple is betting the new features will boost the allure of the Apple Watch, which represents roughly half the global market for smartwatches, by harnessing a constant stream of data captured from smartwatches to give consumers a better picture of their health.

“These devices are with you all the time – we often say that they’re with you more often than a loved one,” Apple’s vice-president of health, Sumbul Desai said in an interview last week at Apple’s headquarters in Cupertino, Calif. “So how do we not take this responsibility and actually help someone with their health?”

Health-tracking devices such as the Apple Watch could potentially cut down on health-care costs by making consumers more aware of their health and allowing doctors to spot and treat serious problems earlier, said Heather Ross, director of the cardiac transplant program at Toronto General Hospital.

Consumer wearables may eventually even help doctors remotely monitor patients who live far away from major hospitals. “The ability for us to enhance monitoring outside of large urban areas – and particularly to allow patients to stay in their home environment while being monitored – has tremendous potential in countries like Canada,” said Dr. Ross, an expert in heart failure, a condition where atrial fibrillation is common.

But in the United States, where Apple’s heart-tracking features have been available since late last year, some doctors are worried that as fitness trackers continue to add new technology that makes them more like medical devices, more people will be falsely warned about serious health problems they don’t have.

The target market for an Apple Watch – young, health-conscious, affluent – is at particularly low risk for atrial fibrillation, which is more common among older people, said Gregory Marcus, associate chief of cardiology research at the University of California, San Francisco. Dr. Marcus is a lead researcher in the Health eHeart study, an ongoing online study of heart disease.

As smartwatches become more common, that could mean rising numbers of otherwise healthy people rushing to the doctor’s office because of an alert, adding to an already backlogged health-care system. “Anecdotally I have certainly heard of many visits where the primary purpose is to reassure someone because of something their Apple Watch told them,” Dr. Marcus said.

Others could potentially get treatments they don’t need, he said. The most common treatment for atrial fibrillation is blood thinners, which lower the risk of stroke but raises the risk of bleeding.

Apple says its research has shown that the watch triggers relatively few alerts, and those it does generate are accurate the vast majority of the time.

In clinical studies submitted to regulators, 12 per cent of the watch’s heartbeat notifications were inconclusive, meaning either the watch couldn’t take a proper reading, or it picked up other types of arrhythmia that were not atrial fibrillation. 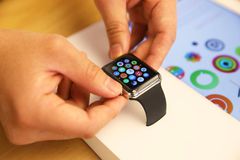