Several Ontario school boards, including the Toronto District School Board, will not be sending home elementary school report cards as teachers and education workers across the province escalate job action in the face of stalled contract talks with the government.

The Toronto public school board said on Tuesday that the decision to suspend Term 1 report cards, typically issued in February, follows job action by the Elementary Teachers’ Federation of Ontario. The union told its members in November not to input data electronically for the Term 1 report cards, and instead provide principals with a list of marks, or a comment per section for the kindergarten reports.

“I want you to know that this difficult decision was made after careful consideration and a thorough review of all options,” TDSB director of education John Malloy wrote in a letter to families. “However, it is not possible to produce accurate report cards for the TDSB’s approximately 174,000 elementary students given the significant resources and time required to do so.”

Report cards are an important measurement of a student’s progress, and elementary students in the province receive one progress report in November, followed by two provincial report cards in February and June, respectively.

Peter Joshua, the director at the Peel school board, said that issuing the report cards would have caused “logistical challenges.”

“We know how important progress reports are to families and students, and that marks, learning skills and teacher comments are valued. At the same time, report cards are not the sole nor are they the most important records of achievement data we have for your child/teen. They are simply one update on progress," he wrote in a letter to families.

Joy Lachica, president of the Elementary Teachers of Toronto, the local ETFO union, said on Tuesday that teachers have submitted their evaluations to principals, and despite report cards not being issued, “learning will be communicated with parents."

“Teachers are so committed to an ongoing communication of learning with parents,” she said, adding that families are kept updated through phone calls and messages home, for example.

For high-school students, who are starting exams, report cards will be issued with marks, but not with comments. As part of its job action, the high-school teachers’ union told teachers not to provide comments on the secondary report cards.

All the main education unions in the province are involved in some type of job action, from work-to-rule to one-day walkouts, for the first time in more than 20 years as tensions with the provincial government escalate. ETFO, the province’s largest union with 83,000 teachers and education workers, started rotating strikes at select boards across the province this week, shutting down schools. The union has been on work-to-rule, which includes not supervising extracurricular activities outside the regular school day and not participating in field trips.

Education Minister Stephen Lecce said in a statement that the cancellation of Term 1 report cards highlights that “yet again, teacher union leaders are risking student success and preventing parents from seeing valuable information about their child’s performance in class.” 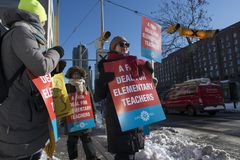 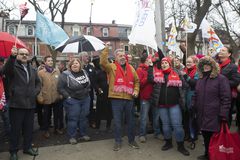