As Quebec began booking appointments Thursday for its expanded COVID-19 vaccination campaign, the province’s health minister said he’s in favour of vaccine passports for those who have been fully inoculated.

Christian Dube was asked at a news conference whether such passports could be used to allow access to entertainment venues or restaurants. He said yes, drawing a parallel to the time of the H1N1 flu when people were required to provide proof of vaccination before boarding flights.

“We’re in digital world, I do not see why we could not have a QR code, like on a boarding pass when we fly,” Dube said. “For me, a digital vaccine passport is normal, and we have teams that are looking into it.” He said he has heard from businesses that would like to be able to check for proof of vaccination before letting people in.

The notion of vaccine passports has been debated around the world as vaccinations have increased, but it has also raised ethical issues about possible discrimination.

“The potentially discriminatory effects of a ‘vaccination passport’ are considerable,” Nadeau-Dubois wrote on Twitter. “It’s not just about taking a plane or dining out, serious questions arise about access to housing, the right to work, to name just these two examples.”

Dr. Horacio Arruda, Quebec’s director of public health, said he would not want such a passport to be seen as a free pass.

“One of the dangers is that we say we’re vaccinated and we end up in a free-for-all,” Arruda said. “We know it’ll protect you, it’ll decrease your risk of complications, but it won’t necessarily stop transmission to someone else.”

So far, only about four per cent of Quebecers have received a first dose of COVID-19 vaccine.

Dube said Moderna has confirmed a shipment for March and the province expects to receive 700,000 doses in total, so it will be able to begin providing second doses as of March 15, falling within the 90-day limit the government set out in January.

Inoculation is set to ramp up next week with vaccinations for anyone 85 and up in the Montreal area beginning Monday and elsewhere on March 8. In the Montreal suburb of Laval, some people in the designated age group were already getting shots Thursday.

Dube tweeted at the end of the day that close to 100,000 people had signed up for appointments on the first day, and he said there were just minor issues with the online platform and phone booking system.

Also Thursday, Quebec announced it will require elementary school students in regions hardest hit by COVID-19 to wear masks when they return from next week’s March break, as the cases of the more transmissible COVID-19 variants continue to rise.

Across the province, the number of suspected cases of coronavirus variants jumped to 772, an increase of 170. The number of cases confirmed through sequencing increased to 34, including 30 of the B.1.1.7 variant first detected in the United Kingdom.

Arruda said that during the fall, outbreaks were seen mostly in high schools. But since Christmas more cases are being detected in primary schools.

The Health Department said students in Grades 1 to 6 will wear pediatric procedural masks at all times inside classrooms and on school transport in Quebec’s red pandemic-alert zones, which include Montreal and Quebec City.

The new health orders comes into effect March 8, when students return from break. The province will be providing masks to the students, as it has done since Jan. 18 in high schools, where masks are mandatory.

In elementary schools, only students in Grades 5 and 6 were previously required to wear masks in class. Health officials said certain students with special needs will be exempt from the new health order, and it won’t apply when children are outside playing.

On Wednesday, Montreal’s public health director said 40 per cent of cases linked to variants in Montreal involve children, with another 20 per cent involving people in their mid-30s to mid-40s, believed to be parents of young children.

As of Wednesday, there were 2,403 active cases in schools and 907 closed classrooms across the province due to COVID-19. Twelve schools were listed as closed or partially closed.

Meanwhile, Quebec reported 858 new COVID-19 cases and 16 more deaths attributed to the virus. Hospitalizations declined by 22 to 633 and there were eight fewer patients listed in intensive care, for a total of 122.

Federal documents show sharp decline of Canada’s pandemic warning system, and debate over who was to blame
February 25, 2021 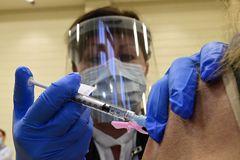