Two emaciated moose left stranded by floodwaters have been euthanized, in what animal welfare workers say is likely just the most visible symbol of a wider problem for New Brunswick wildlife pushed away from their food sources.

Wildlife officials say they had no choice but to euthanize the moose — the sickly animals were too weak to move from the Trans-Canada Highway after they sought out higher ground until they became stranded on a closed highway bridge near Jemseg.

One also had an injured leg.

Animal welfare workers say it may just be the beginning of the story for animals pushed out of their natural dwellings by record floodwaters this month in New Brunswick.

“It can certainly displace them and it may have an effect on the beginning of baby season, especially for the ground dwelling mammals and some of the birds,” said Pam Novak, wildlife care director for the Atlantic Wildlife Institute near Sackville, N.B.

“I think the residual effects too would be the health of any wildlife, like waterfowl, that use the water surfaces because they are becoming contaminated.”

Unprecedented water levels have begun a steady retreat in parts of flood-stricken New Brunswick, but provincial officials have issued repeated warnings that residents should treat the floodwaters with caution because of possible contamination.

Raw sewage has fouled the Saint John River water that is likely also mixed with rotting animal carcasses, fuel and other debris. Health officials say the water could contain harmful bacteria, like salmonella or E. coli.

Novak said that could create longer term issues for wildlife.

“Waterfowl could show up with higher levels of botulism or E. coli,” she said. “My main concern would be seeing the residual effects from the toxicity levels in the water, so we will wait and see.”

She said many animals may also have trouble accessing food that is under water. The decline of prey species, like small rodents killed when their dens became flooded, could limit the amount of food for predators, Novak said.

“If there weren’t good rodent populations, then you might start seeing starvation more in the predator species, like birds of prey and other mammal species,” she said.

“For some crows and ravens, their young have already hatched and there’s going to be effects there where they’re not able to forage and find food for their own young so we may see those kinds of starvation cases in the next couple of months.”

She said pregnant deer and moose will soon be giving birth and a lack of adequate nutrition could affect their health, adding that “it will be interesting to see what the birth rates are going to be this year.”

Dwayne Sabine, a biologist with Energy and Resource Development, said the moose shot on Tuesday were two of about eight that were spotted on an exit ramp near a bridge as they searched for dry ground.

He said that because the water was so high in the low-lying Sheffield-Maugerville area, there was virtually nowhere for the animals to go for several kilometres. Other moose had also been seen seeking shelter near people’s homes in the area.

Sabine said crews had shepherded others off roadways, but the two on the highway were too weak or unable to walk far enough.

“Moose are only one of many, many species that have been affected by the rising waters,” he said. “No doubt there’s mortality involved ... but those impacts are limited to just those local populations.”

Domesticated animals have also been affected by the floodwaters.

Tracy Marcotullio, manager of the Oromocto SPCA, said they have been busy rescuing and housing animals that were either left to fend for themselves when their owners couldn’t get home or evacuated but without a place to go.

She went out in a boat in the White’s Cove area to retrieve a cat from a home that was completely surrounded by water after the owner couldn’t get home.

“The cat was really happy to see us!” she said.

The small shelter has taken in about five dogs and about 15 cats since flooding began almost two weeks ago.

“I suspect there will be some unhappy endings once the water recedes,” she said. “There will definitely be wildlife that has not made it and domestic animals that couldn’t be found. I dread what will probably come afterwards.” 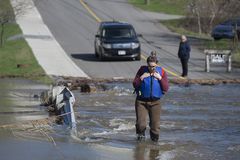 New Brunswick residents warned to be cautious of contaminated floodwaters
May 9, 2018 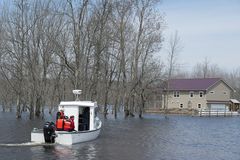 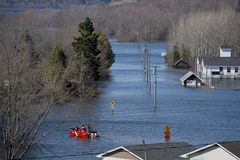