An endangered killer whale that has prompted an international rescue effort won’t receive antibiotics by dart or by fish if it’s found in Canadian waters.

While veterinarians are roaming American waters armed with the experimental life-saving treatments, Paul Cottrell of Fisheries and Oceans Canada says they are still wading through the paper work to make sure any efforts to treat the animal don’t affect other members of her pod.

“It hasn’t been done before so we’ll have to quickly licence that and put in place. So we’re reviewing that as we speak,” Cottrell said from a vessel off B.C., where a Fisheries and Oceans Canada team is also searching for the whale.

The orca known as J50 appears emaciated and scientists have said she may have only days to live.

Cottrell couldn’t say when the Canadian approvals would be in place, but said the process involves reviewing the proposal against the Species at Risk Act, consulting experts and considering regulations against feeding killer whales that were put in place to prevent habituation to humans.

Fisheries and Oceans Canada received the proposed rescue plan for its American counterparts on Friday, he said.

J50 is one of only 75 remaining southern resident killer whales that are found in coastal waters between British Columbia to California.

At only three and a half years old, experts have said she has reproductive potential and could play a vital role in the southern residents’ recovery if she survives.

J50 was last seen Friday in Canadian waters, but researchers haven’t spotted her pod since then. Her pod recently drew an international spotlight when another whale, J35, was spotted pushing the body of her dead calf through the water for more than a week.

Teri Rowles of the U.S. National Oceanic and Atmospheric Administration says that if they find J50, they’ll assess her health and determine if they will administer antibiotics by pole or by dart, and the whale may receive further treatment of salmon laced with medication.

“We don’t know exactly what is wrong with her,” Rowles said in a teleconference. She said they believe an infection is playing a role.

“It’s very possible that she has succumbed at this point and we may never see her again. We are hopeful that there’s still a chance that we will be able to assist her with medical treatment and give her enough time to get nourishment and treat infections, if indeed that is what is causing her decline,” Rowles said.

Cottrell says the first step of assessing her health, which involves collecting breath and stool samples and observing her behaviour, can be done in Canadian waters.

If J50 is in American waters and needs antibiotics, Rowles said the next step will be to administer an antibiotic that lasts 10 to 14 days.

If that goes well, scientists will test the feeding plan by first dropping salmon without medication between 50 and 100 metres in front of J50’s path to see if she or other pod members will eat them. They may drop medicated fish next, if that goes smoothly.

Neither darting a free-ranging killer whale with antibiotics, nor feeding it medicated fish has ever been attempted before, Cottrell said.

While it’s not uncommon for southern resident killer whales to go unsighted for days, researchers are racing the clock to find the J pod because of the young whale’s poor health. Cottrell says Canadian vessels are out on the waters off south west Vancouver Island but heavy fog is making the search difficult.

This is the largest rescue effort of a killer whale along the Canadian and American coast since 2002, when an orphaned northern resident killer whale known as Springer was captured and moved.

Springer was two years old when she was found in Puget Sound near Seattle, ailing and separated from her pod. She was the first orca to be rescued, rehabilitated and successfully released back into the wild.

Entangled right whale freed from buoy off New Brunswick after being spotted on Sunday
August 5, 2018 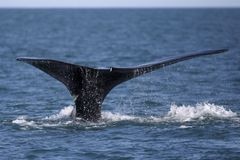 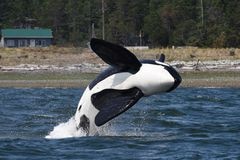 Off B.C. coast, grieving mother orca risks her own life with days of devotion to dead calf
August 2, 2018 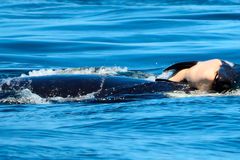