Solutions for reducing greenhouse gas emissions and fighting climate change are available across almost all spheres of human activity, a landmark UN report has found. But a key question is whether the limited progress achieved to date can be scaled up quickly enough to relieve a warming planet still largely powered by fossil fuels.

The competing messages, released on Monday from the United Nations’ Intergovernmental Panel on Climate Change, define the situation for world leaders and others trying to navigate a path forward.

On one hand, a growing understanding of the costs of climate change, and a host of innovations and proposals for moving toward more sustainable practices, suggest there is still a viable path toward achieving the stated goal of the Paris Agreement on climate: holding global warming to less that 2 C above preindustrial levels with a preferred target of 1.5 C.

On the other hand, any gains made from those efforts will be effectively erased absent a more rapid and determined shift away from burning coal, oil and natural gas. While a handful of countries have succeeded in reducing their emissions of greenhouse gasses, commitments made by most governments to date fall well short of halving emissions by 2030 and reaching net-zero emissions by 2050, the trajectory that is deemed consistent with the goals of the Paris Agreement.

“Without immediate and deep emissions reductions across all sectors, the goal of limiting global warming to 1.5 C is beyond reach,” the IPCC said in statement issued with the report.

Among the report’s key findings:

emissions based on targets announced

based on targets announced as of 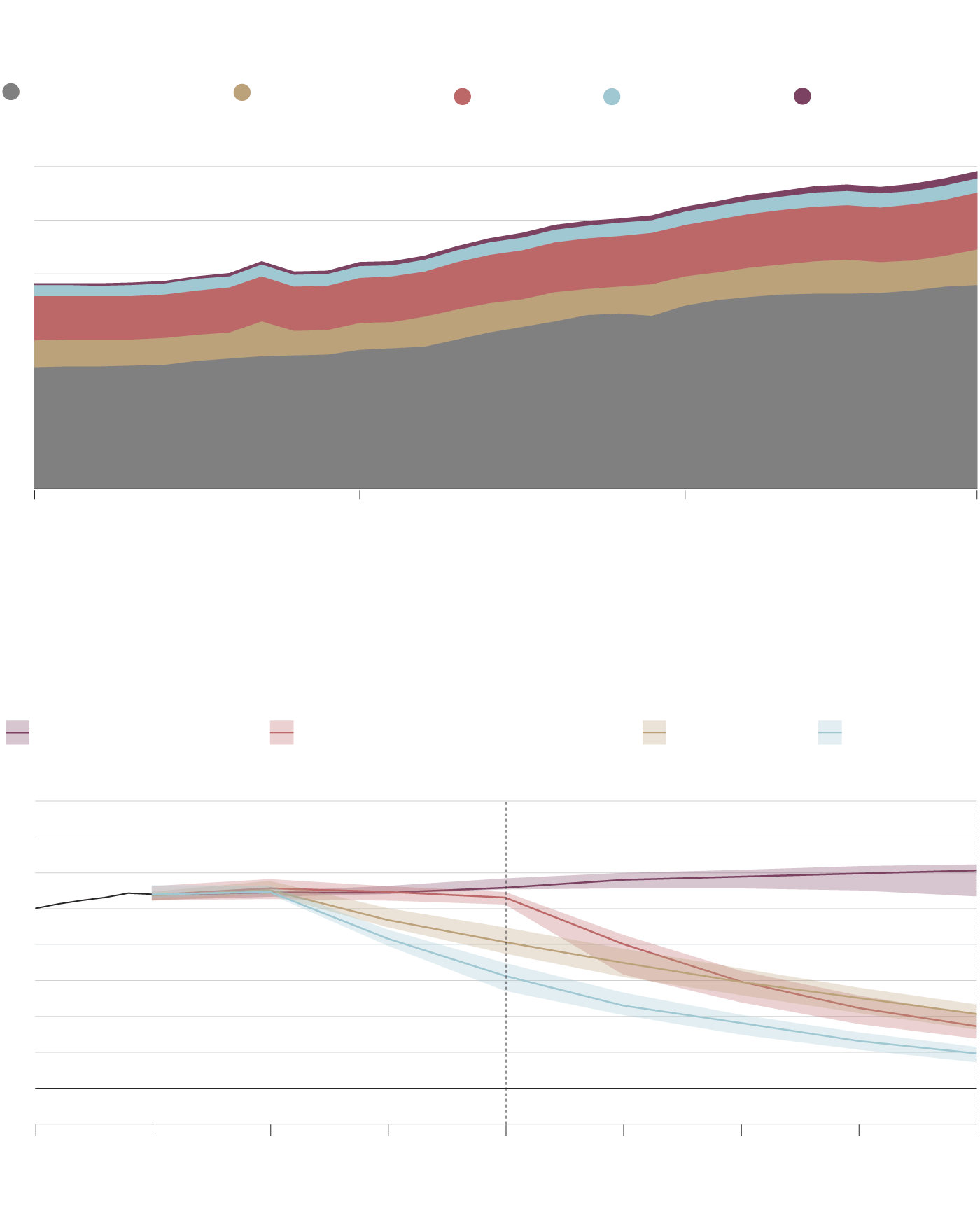 Projected global greenhouse gas emissions based on targets announced as of Nov., 2021

THE GLOBE AND MAIL, SOURCE: INTERGOVERNMENTAL PANEL ON CLIMATE CHANGE

The weighty report, approved late on Sunday by the 195 member countries of the IPCC, including Canada, is the third and final instalment of the most comprehensive assessment of the state of the world’s knowledge about climate change to date.

Globe Climate newsletter: What to watch for in Ottawa’s 2022 budget this week

The first part, released last year, deals with the causes of global warming. Its top line conclusion is that scientists have now established, beyond any reasonable doubt, humanity’s role in heating up the planet. The second part of the assessment, published a month ago, shows that the world is ill-prepared for the multiple and interconnected effects of climate change that are expected later this century.

And with the planet averaging about 1 C warmer than it was several decades ago, early signs of those effects are already evident in every corner of the globe, including deadly heat waves, intense wildfires, flooding, droughts, loss of glaciers and permafrost, and sea level rise.

The third part of the assessment, assembled by 278 expert authors and drawing on about 18,000 cited references, is the most policy-focused. It offers a detailed look at how climate change can be mitigated to reduce those effects.

Patricia Perkins, an ecological economist at York University in Toronto, was among the authors who worked on the chapter in the report that explored reducing emissions through consumer demand, an area that was not deeply explored in previous IPCC assessments.

She said research shows that there “a whole lot of potential for emissions reductions that is there lurking, ready to be tapped,” if people are given opportunities to manage their consumption in ways that are less wasteful – including shifts away from single-use consumer goods and appliances that are designed to be thrown away when they break.

“There has to be this value cascade that works through the system, because it’s just too energy intensive to make a washing machine and then junk it after a few years because the start button doesn’t work,” she said.

Other Canadian experts played leading roles on several of the report’s chapters.

Chris Bataille, a researcher affiliated with the Canadian Energy and Emissions Data Centre at B.C.’s Simon Fraser University, worked on the chapter focused on industry, a economic sector where emissions have continued to grow globally, mainly because of increasing consumption.

He said that in some industries, such as steel-making, there are well-known technologies that can facilitate a shift to a zero-emissions economy. Others, such as the cement industry, pose more of a challenge because of production methods, but there is scope for improvement through carbon-capture technologies and through adjustments in how and where certain materials are used.

“It’s a matter of application of innovation policy and commercialization policy,” Dr. Bataille said. “If we can commercialize the best available technologies ... we’ve got a fighting chance.”

Another of the report’s authors, Sarah Burch, who holds a Canada Research Chair in sustainability, governance and innovation at the University of Waterloo in Ontario, said the report left her feeling hopeful about the increased evidence of action on climate change across several jurisdictions and sectors.

“The flip side of the coin is that when we put all those together we are not on track” to reduce emissions by the amount that is needed, she said.

Dr. Burch added that another key takeaway from the report is that global sustainable development goals for a healthier, more equitable world simply cannot be achieved without addressing climate change.

Speaking at a new briefing on Monday, Environment Minister Steven Guilbeault called the UN report “sobering” and said that it reinforces the urgent need to speed up the transition away from fossil fuels and cut emissions across all sectors of the economy.

Mr. Guilbeault specifically called out Canada’s oil and gas sector, which is the largest contributor to the country’s emissions.

“Business as usual” for the sector is over, Mr. Guilbeault said, warning that “only best-in-class producers have any chance of surviving” the transition to a net-zero economy.

Last week, the federal government released an updated emissions reduction plan that expects a 42-per-cent cut in emissions from oil and gas from 2019 levels within the next eight years.

Cathy Orlando, program director for the advocacy group Citizens’ Climate International, said that the IPCC report offers a glimpse of how the global effort to mitigate climate change could be rapidly accelerated with the right impetus.

“The key is that people have to demand it,” she said. “So we have a lot of work to do to empower our governments to do the right thing.”

Humans are, beyond any reasonable scientific doubt, the primary cause of climate change, UN report says

Listen to The Decibel: What the 'Code red’ IPCC report tells us about our climate future

How climate change will change Canada - and how we can make our communities more resilient
February 27, 2022
explainer
What is COP26? A guide to the Glasgow climate talks – the world’s most consequential environment conference
October 26, 2021