Experts attempting an unprecedented rescue effort to save an endangered killer whale off the West Coast have managed to inject the young orca with antibiotics.

While he is part of the core veterinarian team trying to save the whale, it was the first time he’d seen the animal in person.

“It struck me very dramatically,” he said. “So that first meeting with this incredibly skinny little whale that was by herself was quiet worrisome.”

The three-and-a-half-year-old orca known as J50 is one of 75 remaining southern resident killer whales that spend their summer foraging for salmon off the coasts of British Columbia and Washington state.

Experts have been watching the young whale lose weight since June and they took the novel action in an effort to prevent the loss of more reproductive potential within the population.

Sheila Thornton, lead killer whale research scientist at Fisheries and Oceans Canada, said they’ll often see the southern residents with poor body conditions at the start of the summer, but they improve over the season as they feed on chinook salmon.

“I think that’s one of the things that’s most worrisome to me. Is that not only is she not improving, it looks like she’s deteriorating over the period of time when we would expect to see the condition improve.”

Haulena said they watched J50 rejoin her group on Thursday. She showed no signs of breathing problems, which would indicate she probably doesn’t have pneumonia.

“She was diving for long periods of time and was easily keeping up with her group. That is very good news,” he said.

While the other whales were actively foraging for food, Haulena said they couldn’t tell if she had been eating.

He said they were a few hours into their six-hour day with J50 when all the conditions aligned and they decided to attempt to administer the antibiotics by dart.

“I think it could have gone a little bit better and I would try things a little bit differently based on what we found,” Haulena said. “The injection went in and did not deliver the full dosage. We probably got about half the dosage, maybe a little bit more into her.”

He said a different needle could have been used to allow it to deliver the entire dose, but he didn’t want the animal to have the needle remain with her for a few days or longer before it fell off.

When the water calmed, the team was also able to get a sample from her blow hole, which he said they believe will be very valuable to assess.

Haulena said he has seen other killer whale this thin and they have not survived.

“Some of the things that are going in her favour, I suppose, are that she has been a thin whale for a relatively long period of time, so we’re not looking at an acute disease process.”

Researchers and members of the Lummi Nation have also been testing a plan to feed J50 chinook filled with medication, in case that is deemed necessary.

J50 is in the same pod as J35, a female killer whale that has been carrying the body of her dead calf since it died more than two weeks ago.

Thornton said a Fisheries and Oceans Canada team did encounter J35 off of the southern tip of Vancouver Island on Thursday and she was still pushing the body of the calf, which was born and died July 24. 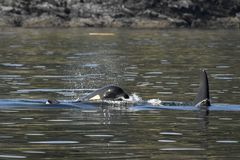