It is the calm of a May evening and all is too quiet here. At a time when thousands normally crowd beneath an umbrella of ivory and pink blossoms, the walking path through Cherry Lane is deserted. The lavish and fleeting rite of spring mostly goes unseen.

As COVID-19 spread, we stopped. The natural world didn’t. Human life is fragile, but nature carries on unbowed. As we isolate to escape disease, the world around us flourishes. There is beauty and hope in that. It is a gentle and reassuring caress all of us need.

The City of Toronto shut down High Park on April 30 to prevent people from gathering elbow to elbow to view the Somei Yoshino, Akebono and Fugenzo cherry blossoms. The trees’ boughs, stripped bare in the cold of winter, come to life each spring between April 15 and May 15. Once they bloom, it takes only a week to 10 days before their alabaster and blush-hued petals flutter to the ground.

The trees are native to Japan and the majority in High Park were given to Ontario in 1959 by the citizens of Tokyo as a symbol of friendship. There are hundreds in Canada’s largest city, with the lion’s share in High Park. More can be found in Trinity Bellwoods Park, Centennial Park, Toronto Island Park, outside the Robarts Library at the University of Toronto, Exhibition Place and in Etobicoke at Broadacres Park.

To view them has been a national pastime in Japan for more than 1,200 years. They are celebrated through blogs and blossom forecasts. When they bloom, offices and schools throw parties. Families picnic on blankets beneath them, sampling rice balls dyed pink and red bean treats. Couples enjoy romantic strolls at night, the scene lit by lanterns.

Ornamental cherries are newer here, but have become wildly popular. It is not uncommon for tens of thousands to jam High Park to witness the fleeting phenomenon. Two virtual live tours of High Park conducted over the past week drew more than 3,000 spectators. Others check on the blossoms’ progress on a 24-hour BloomCam. Police officers patrol the grounds, about half the size of New York’s Central Park, to keep intruders at bay.

Still, at least one fellow was caught on camera clambering up and hanging among the branches of a cherry tree after dark this week. Among those that fancy them, a certain madness is invoked.

So many people are disappointed this year that city officials opened the park to a small number of journalists this week to record and share the spectacle.

A few fallen cherry blossoms dot a sandy walking path near a weeping willow along the water’s edge. The waxing moon begins to rise.

As dusk nears, the light changes as it filters through the trees. The cherry blossoms seem to turn from white to pale pink. Each gust of wind fills the air with sweetness.

Soon, a blizzard of delicate, wind-blown petals ensues. They whirl like snowflakes before settling on the grass, done for the year.

In between older trees, young ones are planted in tidy rows. Fencing is wrapped around their trunks to protect the bark from beavers and rabbits.

Nature always finds a way to command our attention. We can be moved by grassy meadows, snow-capped mountains, the raging falls at Niagara or something subtle such as cherry blossoms.

They are an antidote to the physical and emotional distancing that has engulfed us.

The wind begins to blow harder and the treetops shimmy. Amid nature, the sound of pots banged in appreciation for health care workers can be heard. It is barely audible at first and then grows louder across the silent pond.

It’s time to start thinking about how Toronto should ease the lockdown
Subscriber content
May 1, 2020

Toronto’s High Park to close during cherry blossom season due to COVID-19
April 23, 2020 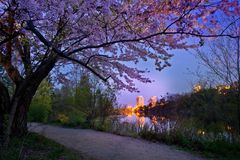 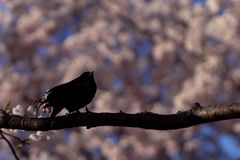