In an era when the intensity of hurricanes is expected to increase across Atlantic Canada, experts say major changes are needed to utility grids, shoreline defences and even the types of trees being planted.

Work continued Wednesday to reconnect customers after post-tropical storm Dorian knocked out power to 80 per cent of homes and businesses in Nova Scotia. By mid-afternoon there were just under 55,000 customers without electricity in the province, compared with 400,000 at the storm’s peak on the weekend.

Recent scientific literature says 35 hurricanes – not including post-tropical storms like Dorian – have made landfall in the region since 1850, an average of one every five years. But signs point to more destructive storms in the region’s future.

Anthony Taylor, a forest ecologist with Natural Resources Canada, wrote in a recent peer-reviewed paper that climate change is expected to increase the intensity of hurricanes in the North Atlantic, though there’s still little consensus on frequency. The paper cited modelling from the National Oceanic Atmospheric Administration carried out last year.

Taylor’s team concluded that when storms produce maximum sustained winds of 95 kilometres per hour, “there’s a greater than 50 per cent probability” the forest in their path will blow down.

He says promoting more mixed forests with hardwoods would reduce the rate of destruction, as softwood species are more susceptible to blowing down.

Some utility industry veterans say the storms should prompt quicker change among electrical and telecommunications utilities whose lines and equipment are broken when trees fall.

Erni Wiebe, former director of distribution at Manitoba Hydro, says Atlantic utilities have to rethink the conventional wisdom that burying lines is too expensive.

The electrical engineer recently co-chaired a joint project of the National Research Council and Canadian Standards Association that proposed revisions to standards to enhance the resiliency of electricity systems in Canada.

Wiebe says too much emphasis has been put on rebuilding North American networks after they’ve blown down rather than prevention.

Improving the cutting of tree foliage will help, but ultimately wider measures are now called for, including burying lines, he said.

However, Wiebe said it’s going to require a major attitude shift among utility executives, while governments and consumers may need to accept higher rates in exchange for stability.

Philippe Dunsky, president of Montreal-based Dunsky Energy Consulting, said that so-called “micro grids,” where neighbourhoods have access to stored or locally produced power, could also be a part of the solution.

However, he added that such investments require regulatory approvals, “and the utilities don’t necessarily have that right now.”

Karen Hutt, chief executive of Nova Scotia Power, said in an interview the utility has a separate team working on climate change adaptation of its grid.

She said Nova Scotia Power currently looks at burying lines in new subdivisions. However, the extensive bedrock in the province makes it up to 10 times more costly than traditional methods.

“We have millions, and in some cases billions, of dollars tied up in above-ground structures, and we need to make sure we manage those costs effectively,” she said.

New technologies can present solutions other than the location of lines, such as the creation of localized “micro grids,” where neighbourhoods may be able rely on battery technology, she noted.

The utility is spending “north of $20 million” annually on tree and foliage control, while it also has been widening transmission corridors in recent years – which Hutt said helped reduce the impact of Dorian.

“Hurricanes, storms, floods, droughts, wild-fires – all of that are accelerating across Canada,” he said, adding that the federal government has created a fund to build more resilient infrastructure across Canada.“ He said $109-million from the $2-billion Disaster Mitigation and Adaptation Fund was spent in Atlantic Canada last year.

“It’s for the protection of shorelines, the protection of utilities inland to fend off flooding … It’s the type of program that we’re going to have to renew and strengthen, because the consequences of climate change are growing more significant and costly,” he said.

“It makes a lot more sense to invest in the infrastructure up front to head off the problem, rather than just cleaning up the mess after it has happened.”

Blair Feltmate, head of the Intact Centre on Climate Change at the University of Waterloo, says Atlantic Canada’s pace of adaptation to climate change needs to pick up.

He is calling for clear standards for coastline resiliency due to predictions of rising sea levels combining with the storms. He says that would mean a more rapid refurbishing of sea walls and dike systems, along with more shoreline vegetation.

Feltmate also calls for an aggressive tree-trimming program to limit power outages that he says “will otherwise continue to plague the Maritimes.”

– With files from Michael MacDonald in Halifax.

100-foot wave recorded off the coast of Newfoundland during Dorian
September 10, 2019 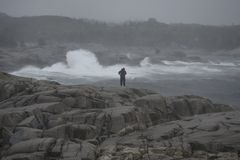 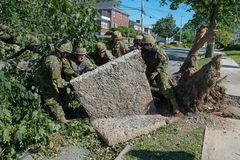 Desperation mounts in Bahamas as shelters turn evacuees away
September 10, 2019 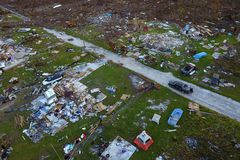