One mother said she and her daughter are constantly yelling at each other and that every day feels like a battle. Another described fighting so often with her son that she desperately needs a break.

Parents are sharing stories of family conflict, and seeking solace and advice in online forums, much of it rooted in the tensions and frustrations of pandemic life. It is a topic they may not feel comfortable discussing elsewhere, but one that many parents are experiencing.

“COVID and the restrictions and isolation have amplified the severity of family conflict,” said Nimir Raval, manager of community initiatives at the Family Centre of Northern Alberta, a non-profit organization that provides counselling and other services.

Family conflict, in which parents scold their children, who often yell back, and more severe forms of family violence are both on the rise during the pandemic.

With all the pressures of pandemic life, from parents trying to do their jobs, if they are still lucky enough to have one, while also often trying to help their kids through the school day, it is no wonder some families are experiencing higher levels of conflict, said Joanna Seidel, a Toronto-based family therapist. But there are strategies parents can use to decrease tensions at home, beginning with a change in perspective, family therapists and counsellors say.

“The moods of parents and the children have been deeply affected. Their general well-being is deeply affected and therefore they’re more agitated and frustrated and angry and conflict is going to increase,” Seidel said.

Data released last July by Statistics Canada found that 46 per cent of parents were “very or extremely concerned” about “having less patience, raising their voice, or scolding or yelling at their children.”

Studies have shown that yelling at children doesn’t improve their behaviour. In fact, it does the opposite. A 2013 study in the journal Child Development found that 13 year olds who were shouted at by parents actually showed worse behaviour the following year.

But even parents who know better may sometimes find themselves too stressed to cope because of pandemic conditions. A survey conducted last September by researchers at the Centre for Addiction and Mental Health, in Toronto, found 30 per cent of parents with children under 18 reported feeling depressed, a rate roughly 10 per cent higher than those who did not have children.

Many of the activities and experiences that would normally brighten our the moods aren’t currently available, which is contributing to family conflict, Seidel said.

“There’s not a lot of options for healthy outlets that children and parents used to have, like going to the gym or going to children’s activities or even socializing and having other types of contacts,” she said.

The need for parents to have some sort of social outlet to cool the frustrations of pandemic life prompted the Family Centre of Northern Alberta to launch a program last fall for parents to connect with one another online with a social worker from the centre facilitating the conversations.

“We can discuss anything that parents want, focusing on their stress, anxiety, scheduling, caregivers and children interaction, communication and healthy dynamics and attachment,” Raval said.

Many of the parents Raval’s organization works with have shared stories of conflict due to online learning, particularly because they sometimes struggle with helping their children with the technology.

“We are creating an initiative to educate those parents and to teach them computer skills in their home so they can navigate that dilemma of not knowing the technology and helping their kids,” Raval said.

There is no single factor that explains such a complex phenomenon as family violence, said Cathy Holtmann, director of the Muriel McQueen Fergusson Centre for Family Violence Research at the University of New Brunswick.

A November report from Women’s Shelters Canada found that 52 per cent of shelters in the country saw an increase in the severity of the violence women were experiencing in the first three months of the pandemic. The report also noted a higher frequency in all forms of abuse.

The conditions of pandemic life have strained every relationship, Holtmann said.

“The pandemic and the isolation that’s taking place have a big toll on relationships, period,” she said.

“One really nice, clear tactic is let my first interactions with my family be positive and loving,” he said. “This isn’t, ‘I need you to get your pants on, young man, and get ready for school.’ It’s, ‘I love you, good morning. How did you sleep? What are you looking forward to today?’ ”

From there, parents should communicate as much as they can about their day, letting kids know what needs to be done, when they will be unavailable because of work or for other reasons and also asking kids what help or support they may need, Walsh said.

“Let them in on the process,” he said.

Ultimately, cooling tensions at home and coping with the stresses of a seemingly interminable pandemic requires keeping matters in perspective, as difficult as that may sometimes be, Seidel said.

“Remind yourself and your children that this is a temporary time in your lives,” she said.

I lowkey can’t believe COVID-19 brought my family back together
March 15, 2021 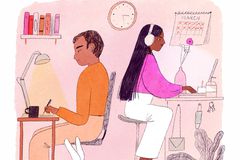 The joys of a marvellously mundane porch visit
March 2, 2021 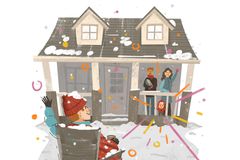 My kid’s pandemic birthday party was simple (and more fun for all of us)
February 24, 2021 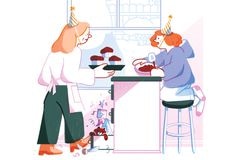