Stella Anthony is no longer allowed to visit her husband of nearly 60 years because of the coronavirus pandemic, but last week she was able to see him nonetheless.

Ms. Anthony, 79, stood outside the window of a main-floor office at Dykeland Lodge, a long-term care home in Windsor, N.S., with her cellphone in hand as two care workers wheeled her husband, Dougie Anthony, 85, up to the glass.

“Close your eyes,” Ms. Anthony said over the phone. “I’m hugging you.” One of the workers wrapped her arms around Mr. Anthony.

“I’m so glad they’re doing this,” Ms. Anthony said, in an interview afterward, about Dykeland Lodge’s efforts to let families connect with each other, even if it’s through an office window.

The Anthonys are one of the countless long-married couples in Canada facing indefinite separation because of nursing-home visitor bans designed to keep out the new coronavirus, which is particularly deadly for the old and sick.

In recent days, long-term care homes in British Columbia, Alberta, Southern Ontario and Quebec have all confirmed cases of COVID-19, the disease caused by the novel coronavirus.

Five homes in B.C. have reported cases, as have a handful of long-term care homes in the Greater Toronto Area, including Toronto’s Baycrest hospital, which reported a case on Friday, and Scarborough’s Seven Oaks, where five cases have been confirmed.

Nine of the 20 Canadian who have died of COVID-19 as of Sunday were residents of the Lynn Valley Care Centre in North Vancouver, the first home in the country to declare an outbreak. Four of the dead in Quebec lived in the same seniors residence, the Quebec government said Saturday.

Mindful of the danger of the virus and of official visiting restrictions in some provinces, the operators of Canada’s approximately 250,000 long-term care beds are now scrambling to find ways to connect residents to family and friends during a lockdown that is expected to last much longer than the typical influenza or norovirus outbreak.

Many homes are ramping up phone calls and virtual visits through FaceTime and Skype, despite being busier than usual without the help of relatives who usually provide hands-on care.

Other long-term care facilities, such as Kingsway Lodge in the Southwestern Ontario town of St. Marys, are finding ways to allow separated couples to lay eyes on each other from a safe distance.

Roger Stephen, 73, and Brenda Mathers, 70, belatedly marked their 51st wedding anniversary on Thursday with a reversal of the balcony scene from Romeo and Juliet.

An administrator at Kingsway Lodge bundled Mr. Stephen up and wheeled him on to a second-floor balcony while Ms. Mathers waved from below.

“He doesn’t hear very well, but he kept giving me the okay sign with his hand and he’d say, ‘I love you, I love you,’ ” Ms. Mathers said. "I was just blown away that the staff would take the time to do that.”

Still, not even the kindest gestures from nursing-home staff can paper over the hardship that residents and their loved ones are confronting in the age of the novel coronavirus, which is known to have infected more than 1,400 Canadians.

Most homes are making exceptions to the no-visitor rules for residents approaching death. Generally, they are being allowed one essential visitor at a time, rather than being surrounded by family and friends as they approach death.

Harry Kennedy, 96, moved into the palliative-care wing of the Sunnybrook Veterans Centre in Toronto a few days before the World Health Organization declared the coronavirus a pandemic on March 11. Until then, Mr. Kennedy, who has prostate cancer, lived at home with his 89-year-old wife, Betty.

Not long after Mr. Kennedy settled in, Sunnybrook enacted the one-visitor-at-a-time rule for the palliative wing, making it difficult for Ms. Kennedy, who uses a wheelchair, to visit her husband of nearly 60 years on her own.

The wife of Mr. Kennedy’s palliative-care roommate has been coming down to escort Ms. Kennedy inside, said Bob Kennedy, the couple’s son.

“She’s very emotional, very fragile,” the younger Mr. Kennedy said of his mother. “She has good moments and bad moments, all within the same day. We’re even looking at ways that we can keep them connected through Facebook and Skype for those days and occasions when she can’t get in to see him personally.”

Mr. Kennedy had nothing but praise for the Sunnybrook staff, torn as they are between facilitating a meaningful end-of-life experience for patients and blocking relatives who might unwittingly spread the coronavirus.

The home has confirmed one case of COVID-19 in a resident veteran, but not in the palliative wing, according to Sunnybrook spokesman Craig DuHamel.

Coronavirus precautions at long-term care homes extend to after death, as well.

Roselle Martino’s grandmother, Maria Martino, died at the age of 101 last Tuesday at Seven Oaks, a city-owned long-term care home in Scarborough. The family was not allowed in to see the matriarch after she died. The staff put her belongings in a bag by the door.

The younger Ms. Martino said in an interview last Thursday that she understood and supported the home’s decision to be careful, but that didn’t make things any easier on her parents and other family members.

“It’s hard to explain this to them," she said. “ ‘No, you can’t go and see her. No, we can’t have a big funeral.’ It’s hard for them to get their heads around this way of living.”

The next day, Toronto Public Health announced that a resident of Seven Oaks had tested positive for the coronavirus.

That resident lived on the same floor as Maria Martino. Ms. Martino had pneumonia when she died but was not tested for COVID-19, according to her granddaughter. “We’ll never know,” Roselle Martino said in a message over Twitter.

There are now five cases of COVID-19 at Seven Oaks, Lenore Bromley, a spokeswoman for Toronto Public Health said Sunday.

Sign up for the Coronavirus Update newsletter to get the day’s most essential COVID-19 news, features and explainers delivered to your inbox each evening. 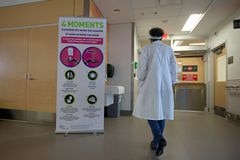