Five years ago, Dilnaz Garda stood frozen in place at a procession line at her brother’s funeral. His colleagues, Toronto police officers, walked up to her one by one.

“I’m in my own living hell,” some whispered into her ear. “I know what your brother went through.”

Darius Garda, 29, plunged into Lake Ontario and drowned himself in February, 2016. He had lived for years with post-traumatic stress disorder that stemmed from the fatal shooting of a man in mental-health crisis.

Wieslaw Duda, 49, had led police on a car chase that ended with him hitting an officer. That’s when Darius Garda and another officer fatally shot him.

“I didn’t understand that if so many officers were in their own emotional hell, why wasn’t anything being done?” Dilnaz Garda said in an interview.

Ms. Garda and Kristal Jones, whose husband – also a Toronto police officer – has struggled for years with PTSD, launched Toronto Beyond the Blue, a charity that offers counselling to officers and their family members.

Their next project is a permanent memorial on the grounds of the provincial legislature to recognize officers who have died by suicide.

The pair, along with a group of police widows, have already secured the support of police leaders and the unions for the proposed Heroes in Life Memorial.

It will be separate from another memorial – also at Queen’s Park – that honours police officers who have died in the line of duty.

Jason Tomlinson, the president of Ontario Police Memorial Foundation, said the new memorial is a matter of when, not if.

“You know, it’s time,” he said. “I think by having the Heroes in Life Memorial and by continuously raising mental-health awareness we are going to be better prepared to deal with suicide, prevent it from happening, and it won’t be this dark secret.”

A spokesman for Solicitor-General Sylvia Jones said the mental health of police officers is a top priority for the government.

“We are always open to new ways to honour officers who have, tragically, died by suicide,” Stephen Warner said of the proposed memorial.

Ms. Garda said she never wanted her brother’s name to be on the memorial for officers who died in the line of duty.

“The deaths are inherently different,” she said. “This wall is more than a wall, it’s an opportunity to bring awareness and put pressure on stakeholders to make change.”

“He said he felt justified in the shooting, but the process afterward made him feel guilty,” Ms. Garda says.

The Special Investigations Unit cleared Darius Garda and another officer of wrongdoing and a subsequent coroner’s inquest recommended further training for officers to deal with those in crisis.

“He learned information about where his bullet entered and that this man had two children,” she said through tears.

“You can’t walk away from that.”

Ms. Garda said her brother didn’t ask the force for help because he felt it would be “career suicide.”

“We tried,” she said. “We dealt with this for years, the estrangement, the rage, the self-medication, we went through everything.”

Police officer suicide data are difficult to come by, but experts and police unions say more officers die by suicide than in the line of duty.

Three Toronto police officers died by suicide in the last year alone, the force says, while no officer has died in the line of duty since 2013.

Ms. Garda says there are 20 families who want their loved ones’ names on the memorial.

Bruce Chapman, the president of the Police Association of Ontario, which represents more than 28,000 officers and civilians from 46 forces, said the organization wholeheartedly supports the proposed memorial.

“Long gone are the days of where we hide the death of a first responder or a police officer who dies by suicide,” said Mr. Chapman, an officer with Peel regional police.

About 30 years ago he responded to a car crash and held an 18-year-old woman who took her last breath in his arms.

He said her image still haunts him.

He’s lost close friends on the job to suicide and believes people need to talk more openly about it.

“It’s no longer the ‘suck-it-up’ days and this memorial will help reinforce that,” Mr. Chapman said.

Ontario Provincial Police has lost 10 officers to suicide over the past five years – three of them in one month in 2018. That prompted several internal reviews as well as a coroner’s review.

The OPP said it supports a provincial memorial for officers who have died by suicide and is about to build its own memorial at its headquarters in Orillia, Ont.

Patrick Baillie has seen a lot of changes in the course of his 25-year career as a psychologist who consults with Calgary police force.

Supports have improved over time, he said, and officers are now more open to seeking help. About 25 per cent of Calgary police officers access mental-health services every year, he said.

The biggest boost, he said, comes when senior officers openly discuss their own mental-health challenges.

“That sends a message that addressing your mental health is not only not going to be an impediment to career advancement, but it might actually help you deal with some of this stuff and become a higher-functioning police officer,” he said.

In February, 2020, after Constable Mike Austin took his own life in the parking garage of Toronto police headquarters, then-chief Mark Saunders tweeted about the loss, but did not use the word suicide.

“The officer’s death is not suspicious,” the chief wrote.

After seeing his tweet, Ms. Garda called Mr. Saunders and pleaded with him to talk straight. The chief listened, she said.

Several hours later, Mr. Saunders wrote on Twitter: “I am confirming that we are investigating our officer’s death as a suicide at this time.”

Toronto police said they have changed the language they use when dealing with such incidents.

“Through input and insight from those with lived experience, the TPS strives to use ‘died by suicide’ to communicate to members and the public about these incidents, rather than the ambiguous description of ‘non-suspicious death,” spokeswoman Meaghan Gray said.

Ms. Garda called it a “monumental change” for officers and their families.

“We can make change,” she said. 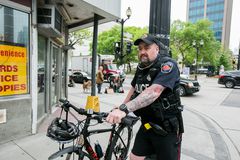 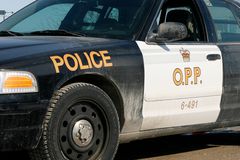 Toronto police officers who die by suicide now eligible for memorial wall
April 20, 2017
Report an error
Due to technical reasons, we have temporarily removed commenting from our articles. We hope to have this fixed soon. Thank you for your patience. If you are looking to give feedback on our new site, please send it along to feedback@globeandmail.com. If you want to write a letter to the editor, please forward to letters@globeandmail.com.
Comments