Duncan McDonald, 28, has no real concept of money. A $5 bill would mean no less to him than $5,000, according to his mother, Susan Wahlroth.

Since graduating high school seven years ago, Mr. McDonald, who has Down syndrome and lives with his mother in Guelph, Ont., has filled his days with vocational day programs at Torchlight Services and Community Living Guelph Wellington – local non-profits that provide services for people with cognitive and physical disabilities.

The organizations used to provide work contracts for people such as Mr. McDonald and pay them under minimum wage to do the work in sheltered workshops – work centres that employ people with disabilities to work separately from others. Among other duties, their tasks included packaging items, preparing mailings and sorting products.

This is the first month Mr. McDonald has had no work since the province mandated phasing out sheltered workshops by next year. The same legislation that has brought a higher minimum wage to Ontarians also removed the exemption for sheltered workshops. Employers that worked with service providers like Torchlight Services can’t pay their workers less than minimum wage, and most have opted to stop hiring people with cognitive disabilities.

The best intentions to protect vulnerable workers have instead harmed them, say Ms. Wahlroth and other parents who are asking the Ministry of Community and Social Services to reopen the dialogue on work contracts for people with developmental disabilities, as their adult children can’t compete against fully abled people in terms of productivity.

“If Duncan is folding gloves, maybe he can fold 10 pairs that day, but maybe somebody else can fold, like, a hundred pairs. So should an employer [be expected] to pay Duncan $14 to fold his 10 gloves or is he going to pay one of his employees $14 to fold a hundred?” she said.

But the Ministry of Community and Social Services believes the decision to move away from its sheltered workshops was the right one, according to spokesman Daniel Schultz.

“There is simply no justification in the 21st century to segregate any group of people and pay them less than minimum wage for the work they have done,” he wrote in an e-mail.

Mr. Schultz said the closure of sheltered workshops is not about taking away supports and that no workshop will be phased out for an individual without appropriate alternatives in place.

“Some individuals with developmental disabilities may prefer to focus on community participation, such as volunteering or recreational opportunities,” he wrote.

But for these workers, having a job, even one with a smaller paycheque, gave them a sense of purpose, said Ms. Wahlroth.

“I just don’t know how they can go in and be so disrespectful and devalue these jobs that our guys take such great pride in,” she said. “How can somebody who doesn’t even know [Duncan] say, “Well, you can do better than this, so we’re taking your job away?’ Because he can’t necessarily do better than what he’s doing right now.”

Torchlight Services had 45 people on work contracts, most of which have already ended. The remaining contracts will be phased out by the end of June, according to Patty Cote-Duncanson, executive director.

Ms. Cote-Duncanson said they’ve received several complaints from parents about the work contracts ending. She said one of the benefits of these placements was that workers were able to socialize with one another and build friendships without the pressure of having to get a certain amount of work done; their pay was based on the number of hours they were there.

“Some of it is just the whole idea of going to work,” she said. “It could’ve been a nickel and it wouldn’t have mattered. It was the process of coming in and getting their money.”

Ms. Cote-Duncanson added that it’s hard for people with developmental disabilities to find work on their own because they don’t have the supports provided by organizations such as Torchlight Services.

“Even when they do find jobs, they don’t seem to last,” she said. “A lot of companies – with having to pay $14 an hour – they don’t want to spend the time or can’t spend the time to train them and give them a chance to learn.”

Ms. Cote-Duncanson said that if somebody wants to hire them now, they have to put them through the payroll process and include employee benefits, as opposed to asking them to come to work for a couple of hours and paying them in cash, which has been the normal practice.

Mr. McDonald currently works at a restaurant for three hours a week. He got fired from his previous restaurant job because he stopped going to work after they hired a new manager who didn’t have a background in dealing with people who have special needs, Ms. Wahlroth said.

Ms. Cote-Duncanson said Torchlight is working on getting their clients into the community through other community outings and recreational activities, such as cooking, hiking and swimming. They are also trying to find them volunteer opportunities so that those who are used to working feel like they are a part of something.

But some individuals, like Mr. McDonald, are having difficulty adjusting to the changes.

“It’s a little bit of a struggle because they were happy and now it’s got to change,” said Ms. Cote-Duncanson. “Sometimes for these people, these adjustments cause anxiety.”

Ms. Cote-Duncanson added that Torchlight will need to fundraise in order to make up for the shortfall in revenue they’ve lost from the work contracts ending. In the future, they are planning to get small groups together to do lawn mowing.

Joe Dale, executive director of the Ontario Disability Employment Network, said not every business is open to hiring people with disabilities because some businesses that have done so in the past are struggling to pay a higher minimum wage.

Mr. Dale added that Bill 148 has had a greater impact on the service sector (retail and fast-food industries) and that people with disabilities need to start looking at business sectors that are more stable and have better job opportunities for them.

But Ms. Wahlroth said she’s worried about her son’s future.

“I don’t know what I’m going to do and I just think that this is wrong,” she said. 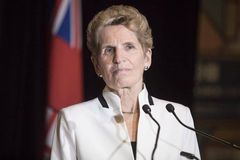