The family of a Black man shot and killed by police in a Montreal suburb on Sunday wants to know why officers opened fire.

Jean René Junior Olivier’s family told reporters gathered outside his mother’s home on Monday they had called police because they were concerned for his well-being and wanted him to get help. Instead, they said, he received three bullets in the stomach just a few houses over from his mother’s home on a leafy residential street in Repentigny, Que., just north of Montreal.

“I’m very angry about what happened, I called for help and they killed my son,” said Marie-Mireille Bence, the victim’s mother.

The family says Mr. Olivier had discarded the knife on the ground before police shot him. If police had to shoot, they say, officers should have aimed for another part of his body.

“He threw the knife on the ground and that’s when they shot him, they shot him three times,” Ms. Bence said. “I called for help and I lost my son, I find it absurd because there were other ways of dealing with this, of bringing him under control.”

The death has Mr. Olivier’s mother thinking twice about calling police. “If tomorrow I have another problem, will I call 911? Not at all, because I do not have confidence in the police,” Ms. Bence said.

Quebec’s police watchdog began investigating the death on Sunday. It said in a statement that officers responded to a 911 call just after 7:30 a.m. that morning regarding an allegedly confused and unstable man armed with a knife.

They said police found the man outside and tried to speak to him but he fled on foot and allegedly became threatening toward officers. The watchdog said police used pepper spray to try and subdue the man but failed and then shot him multiple times.

Montreal-based civil rights group Center for Research-Action on Race Relations is assisting the family. Executive director Fo Niemi told reporters the Repentigny police force has been criticized for the way it has treated Black residents. City police have been hit with at least four complaints for racial profiling before the province’s human rights commission and Mr. Niemi said several other complaints are forthcoming.

Dolmine Laguerre, Olivier’s cousin, said she’s outraged. The mother of three, also a Repentigny resident, said she feels unsafe in the community. During the news conference, she showed the small kitchen knife Mr. Olivier allegedly had in his possession and questioned why six officers and three bullets were necessary to bring Mr. Olivier under control.

“We understand this event has shaken our community – our police officers as well as the family of the victim to whom we offer our sincere and profound condolences,” police Chief Helen Dion told reporters.

Chief Dion declined to go into specifics but said “despite all the training or experience a police officer has, believe me, no one gets up in the morning wanting to discharge a firearm.” She said the watchdog investigation and a coroner’s probe will shed light on the incident, adding that she and the Mayor will meet with Ms. Bence as soon as possible.

Kayshawn Olivier, one of the victim’s sons, said he has only one question for authorities.

“All we want is answers,” he said. “The question is why three bullets?” 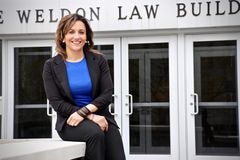 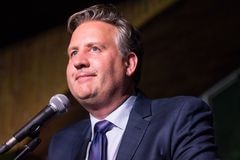 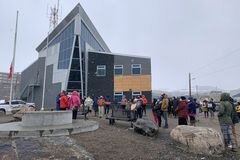 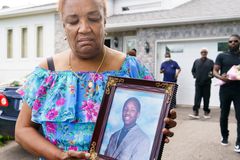