Grant Robertson
Published May 12, 2021 Updated May 12, 2021
Comments
Text Size
Please log in to listen to this story. Also available in French and Mandarin. Log In Create Free Account

An independent expert panel examining the global response to COVID-19 says February, 2020, was a “lost month” when many countries should have been doing more to prepare for the crisis, but instead did very little until it was too late.

The report echoes criticisms Canada and several other countries have faced over the past year for acting too slowly in the crucial early months of the outbreak, leaving them underprepared and unable to properly contain the virus.

The panel, convened by the World Health Organization to provide a critical assessment of what went wrong with the response to the pandemic, makes several recommendations including the need for faster action in the face of a threat, better pandemic early warning systems and equity in vaccine distribution.

“COVID-19 remains a global disaster. Worse it was a preventable disaster,” the report said. “The Independent Panel has found weak links at every point in the chain of preparedness and response. Preparation was inconsistent and underfunded. The [global] alert system was too slow – and too meek.”

Though the panel does not single out countries or organizations, it suggests China should have acknowledged human-to-human transmission of the virus sooner than it did in early 2020. It also said the WHO should have sounded its loudest alarm – declaring a Public Health Emergency of International Concern (PHEIC) – earlier than Jan. 30, 2020.

But after that emergency was declared, “too many countries took a ‘wait-and-see’ approach rather than enacting an aggressive containment strategy that could have forestalled the global pandemic,” the report said.

Joanne Liu, the Canadian representative on the panel, said crucial time was wasted, and resulted in missed opportunities in February, 2020.

Dr. Liu, a Montreal physician and the former international president of Médecins Sans Frontières (Doctors Without Borders), is one of 13 experts on the panel, which is led by Helen Clark, former prime minister of New Zealand, and Ellen Johnson Sirleaf, former president of Liberia.

In addition to the WHO’s delay in declaring an emergency, the report said uneven strategies from individual governments caused further problems. “Countries that devalued science, failed to build trust in their response, and pursued inconsistent strategies found themselves continually lagging behind the epidemic and have seen the consequences in high rates of infection and death,” the report said.

Canada has been criticized by public-health experts and the intelligence community for acting slowly in early 2020, as have a host of other governments. Throughout February and into March, even as COVID-19 spread internationally, Ottawa said repeatedly that it did not consider the virus a significant threat to the public. Canada didn’t elevate its own official risk assessment from “low” to “high” until March 16, when it finally urged people to begin physical distancing.

“Honestly, the big, big issue is that the majority of the countries, probably 90 per cent, sat on their hands after the declaration of the PHEIC at the end of January,” Dr. Liu said.

The report makes several recommendations to the WHO to guard against future crises, including elevating pandemic threats to the level of nuclear and chemical disasters, where the global community has more powers through international agreements to gain immediate access to a foreign country and examine the threat. Such steps in the event of nuclear meltdowns were introduced after the Chernobyl nuclear disaster, Dr. Liu said.

A similar mechanism for serious outbreaks could allow for a designated international team of experts to gain quick access to the outbreak site to gather information and begin planning, Dr. Liu said. Even after the COVID-19 outbreak became known to the world, China was criticized for not sharing information quickly, for not granting access to investigators and for minimizing the threat of the virus.

The report also calls on countries to build more robust pandemic intelligence systems capable of detecting threats early, and to track the problem as the outbreak worsens, so that governments can make better decisions.

“The current system – at both national and international levels – was not adequate to protect people from COVID-19,” the panel said.

Canada operated an internationally renowned pandemic early warning and surveillance system, known as the Global Public Health Intelligence Network, or GPHIN. However, the system, which supplied the WHO with 20 per cent of its epidemiological intelligence, was allowed to deteriorate over the past several years. A Globe and Mail investigation found that the Public Health Agency, believing no pandemic threats were imminent, began to allocate GPHIN’s resources to other areas in 2018, and in 2019 shut down its internationally respected alert system.

This left Canada without a fully operating pandemic early warning system that had been credited with supplying crucial information during SARS, H1N1 and other past outbreaks, and fed into the government’s risk assessments.

Though GPHIN became sidelined in Canada, several governments are now building pandemic warning systems of their own, including the United States and Germany, which this month proposed the creation of a WHO intelligence hub, based in Berlin, connecting other systems around the world.

The Auditor-General of Canada issued a scathing report two months ago criticizing the government’s handling of GPHIN. Health Minister Patty Hajdu also ordered an independent review of the pandemic early warning system, which is expected to release its final report this spring.

“If you have signals coming from different places in the world and there is this big warning, it will create the necessary traction for strengthened response. I’m convinced of that,” Dr. Liu said.

The push to create new early warning systems demonstrates their value, Dr. Liu said. “If your first step is not [effective], it’s going to have a domino effect all the way along. So I think there is this kind of acknowledgement now.”

The report also calls for a better global vaccine strategy, saying that COVID-19 has exposed countries acting independently at the cost of others. But if the pandemic is to be slowed, it must be done on a global scale, the panel argues.

“The vaccines available are a scientific triumph, but they must now be delivered across the globe. At the time of writing, fewer than one in 100 people in low-income countries had received a first dose – a graphic demonstration of global inequality. As the virus spreads, it is also mutating and creating new challenges,” the panel said. 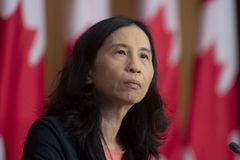