Rookie NDP Leader Jagmeet Singh, who pledged to build a sweeping movement of young and racialized voters, was not able to deliver on that promise Monday night.

Despite signs of a “Singh surge” in recent weeks, that momentum appeared to have fizzled by election day. The Liberals are set to form a minority government, with the New Democratic Party falling in fourth place behind the Bloc Québécois, and losing most of the gains it had made in Quebec during the 2011 orange wave.

NDP Leader Jagmeet Singh thanked supporters in Burnaby Monday night as he pledged to “work hard” to ensure people have a future that’s “filled with hope.”

Mr. Singh said he spoke with Liberal Leader Justin Trudeau and let him know that “we’ll be working hard on making sure we deliver the priorities that Canadians have.”

In the days ahead, Mr. Singh said, he will be meeting his new caucus to discuss how they can deliver for Canadians, saying the real winner of the election is not a party or a leader, “it should always be the people and that means Canadians.”

“Canadians sent a clear message tonight that they want a government that works for them, not for the rich and the powerful.”

The NDP fell to fourth place after the 2019 election, but party leader Jagmeet Singh was upbeat as he delivered a speech in his home riding in Burnaby, B.C. He listed some of the priorities the party will work towards completing — along with the other parties, if they're willing.

Monday’s results do place in Mr. Singh’s hands the power to negotiate with the Liberal minority government – a possibility he left open throughout the campaign. Among his priorities in negotiating include: investing in housing, fighting climate change, and bringing in a universal pharmacare and national dental care plan.

From the outset, the 2019 election looked like it would be a challenging one for Mr. Singh.

In the weeks leading up to the start of the campaign, with the NDP polling in fourth and sometimes fifth place among the federal parties, many pundits were already speculating Mr. Singh would not be long as party leader. Still, by mid-campaign, Mr. Singh appeared to have turned things around and throughout this week, appeared to be on the verge of a comeback.

The comeback failed to materialize. While Mr. Singh managed to steer the party back from the brink of collapse, and preserve official party status, the NDP still saw a steep drop in support from the 2015 election. Early results Monday evening showed the NDP winning 15 per cent of the popular vote, and leading or elected in 24 ridings – far short of the 44 seats it had previously held.

The results were especially disappointing in Quebec. The 2011 orange wave that saw Jack Layton’s NDP propelled into official opposition owed in large part to a breakthrough in Quebec, and winning 59 of the 75 seats available in the province. That dropped to 16 in 2015 under Tom Mulcair. After Monday, those gains made in Quebec dissolved almost completely. Early results showed the NDP holding on to just one of those seats. 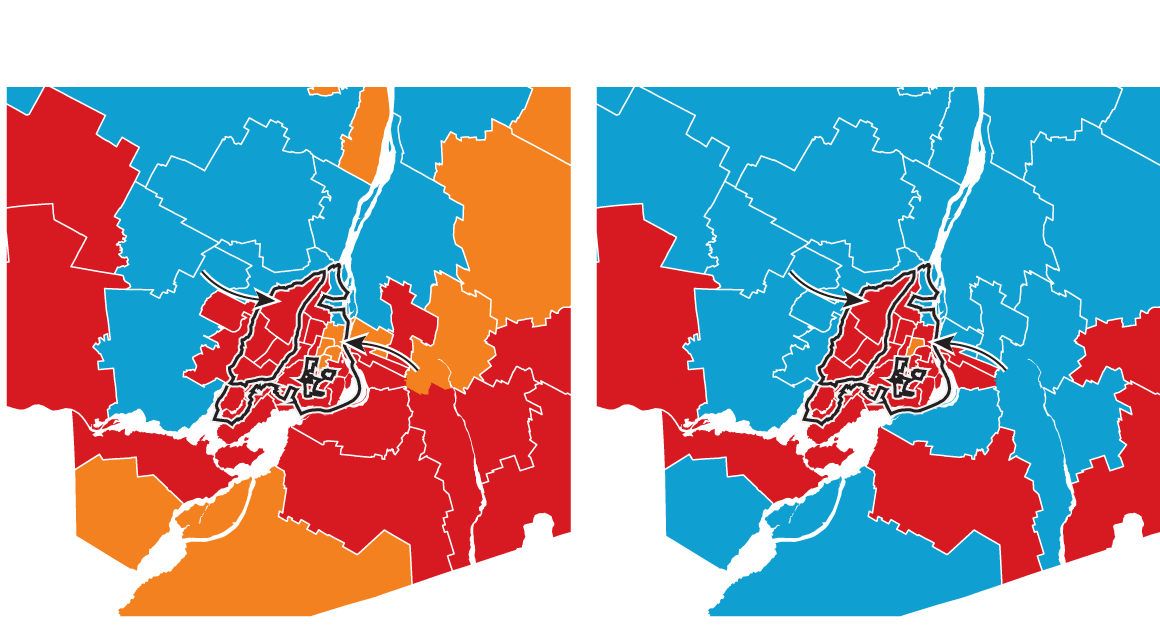 According to Brad Lavigne, a former NDP campaign director who spoke with The Globe and Mail ahead of Monday night’s results, the Quebec results this time around were an anomaly – the result of the Bloc Québécois mobilizing support from Quebeckers seeking to protect Bill 21, a provincial law that would prohibit religious symbols from much of the public service.

“I think the Bloc were successful in getting Quebec voters to kind of retreat to a message whereby Quebeckers on the issue of identity feel the need to, as Mr. Blanchet said, ‘stick together,’" Mr. Lavigne said.

Mr. Singh took the helm of the party in 2017, after serving as deputy leader of the Ontario NDP. He had no federal experience and struggled to unite a party left deeply divided after a disappointing showing in the 2015 election and the ousting of former leader Mr. Mulcair.

He took over a federal party deeply in debt, and his initial performance failed to inspire new fundraising. The NDP’s annual return in September showed the party ended last year $4.5-million in the red. Meanwhile, he had difficulty gaining a national profile after waiting 18 months to run in a by-election in Burnaby South and finally gaining a seat in Parliament.

He also struggled to maintain the support of his caucus. By the start of the campaign in September, 11 caucus members had announced their intentions not to run again. While his opponents criss-crossed the country each day on the campaign trail, Mr. Singh and the NDP’s diminished campaign war chest was left having to spend much of his campaign travelling by bus. As such, he focused much of his time on battleground provinces, skipping Prince Edward Island, Alberta, Newfoundland and Labrador, and the North, where the NDP prospects were slim.

Still, there were signs during the election that Mr. Singh might have turned things around. The first turning point came a week into the election, after the revelation that Mr. Trudeau had repeatedly dressed in brownface and blackface before entering politics. The calm and measured response demonstrated by Mr. Singh – the first racialized leader of a federal party in Canada – won him widespread praise. Rather than criticize Mr. Trudeau, Mr. Singh focused his attention on racialized communities and the effects the image might have on them.

“Mr. Singh’s contributions really changed the content and the tone about how Canadians were interpreting that," said Melanee Thomas, a University of Calgary associate professor of political science.

And in the main English-language leaders’ debate in October, Mr. Singh surprised many with a strong performance. More than once, he took advantage of Mr. Trudeau and Mr. Scheer talking over one another to calmly intervene.

At campaign stops, he appeared comfortable and confident. By the final week of the campaign, the momentum Mr. Singh was gaining was reflected by the growing crowds at his rallies – audiences of between 500 and 1,000 people at his campaign appearances in Ontario, Quebec and British Columbia.

While his predecessor, Mr. Mulcair, was ousted after one election, Prof. Thomas said that based on Mr. Singh’s performance on the campaign trail, his position is most likely secure.

“I think he’s quite safe,” she said. Prof. Thomas said that the NDP’s 2011 results – and the orange wave in Quebec – was an anomaly. “[Monday’s results] strikes me as much more status quo for the New Democrats. ... I think because a lot of the NDP’s popularity around this election centred around him, it would be pretty foolish to remove him."