The Liberals maintained their grip on vote-rich Ontario as their competitors failed to break through in the key Greater Toronto Area battleground.

While much of rural Ontario supported the Conservatives, Leader Andrew Scheer did not get the support he needed in urban centres in Monday’s election results. The party suffered one of its biggest losses in Milton, where heavyweight Lisa Raitt was defeated by former Olympian Adam van Koeverden, a star Liberal candidate.

The NDP also did not crack through in ridings they had hoped to take from Liberal Leader Justin Trudeau, including in Toronto and Brampton.

The Liberals swept all 25 ridings in the city of Toronto, based on results late Monday evening. Prominent Liberal cabinet ministers Bill Morneau and Chrystia Freeland cruised to victory in their downtown ridings, while Liberal candidates also won Parkdale-High Park and in Davenport, two central Toronto ridings the NDP had been hoping to pick up. 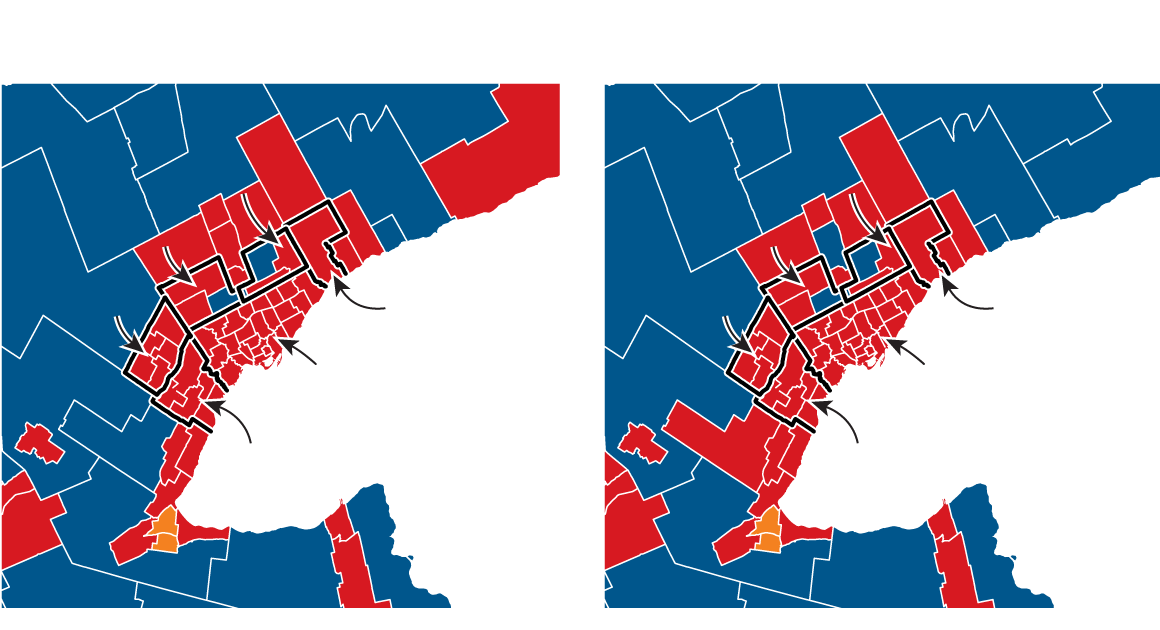 As preliminary results for Toronto-Danforth flashed across television screens in a neighbourhood pub, a hush fell over a crowd of about 80 NDP supporters as candidate Min Sook Lee trailed behind Liberal incumbent Julie Dabrusin. The riding was previously held by Jack Layton, the late former NDP leader.

At a downtown Toronto pub, a group of provincial Progressive Conservatives, university students and aides in Premier Doug Ford’s provincial government were subdued as the numbers pointed toward a Liberal minority government.

One Ford government source, speaking on condition of anonymity, said Mr. Scheer’s team would be looking for explanations but would be wrong to blame the Premier.

The source said the federal Tories should not have ignored the Premier and his team for the entire campaign, and cannot lay the result in Ontario on Mr. Ford.

At City Hall, Toronto Mayor John Tory sent congratulations to Mr. Trudeau for his victory and said that he looked forward to continuing to work with the federal government on transit, affordable housing and gun violence.

With one-third of the country’s total seats, Ontario was a critical election battleground. Both Mr. Trudeau and Mr. Scheer spent part of the last weekend of the campaign trying to solidify their support in the suburbs outside Toronto.

The vast 905 region, known for its area code, contains 30 ridings surrounding Toronto, has been a linchpin in recent election victories, including Mr. Trudeau’s in 2015 and Stephen Harper’s in 2011.

This time, the Conservatives had aimed to regain the upper hand with voters in the 905, targeting affordability issues and highlighting the effect of Mr. Trudeau’s carbon tax on gas prices.

However, the Conservatives were wary of having their fortunes dragged down by Ontario Premier Doug Ford, whose government has faced a raft of controversies over increased school class sizes, spending cuts to services and patronage scandals.

Throughout the campaign, Mr. Trudeau repeatedly invoked the Progressive Conservative Premier in an attempt to link his unpopular policies to the federal Conservatives. For his part, Mr. Scheer largely avoided even uttering Mr. Ford’s name.

In what critics said was a clear attempt to mitigate damage, the Ford government put the Ontario Legislature on a five-month break in June, with members not due back until next week. The Premier was absent from the campaign hustings and made limited public appearances. His government also walked back some of its spending cuts and spent millions to avert a provincewide school strike. By contrast, Alberta Premier Jason Kenney did a swing through the Greater Toronto Area to help the Tories.

The Liberals dominated Ontario in 2015, winning 80 of its 121 seats. By contrast, the Conservatives elected 33 Ontario MPs and the NDP just eight.

With reports from Oliver Moore and KC Hoard