The federal government will split funding for bus service on rural routes abandoned by Greyhound in northern Ontario and Western Canada but Transport Minister Marc Garneau says only British Columbia has so far taken him up on the offer.

“This is something that for over 60 years has been a provincial responsibility,” he said of Ottawa’s decision not to subsidize Greyhound or previously get involved in funding inter-city bus travel.

Garneau made his comments Wednesday after meeting with B.C. Transportation Minister Claire Trevena. It was the fourth discussion between the ministers on a 50/50 cost-sharing plan to service routes that were dropped when Greyhound shut down operations last fall, citing a loss of $70 million over six years.

“We will wait to see if other provinces come to us,” Garneau said, adding the federal government is expecting B.C. to provide a list of unserviced routes as well as costs for the two-year arrangement.

He said the federal government will also pay half the cost for the BC Bus North Service the province began last year at an expense of $2 million to offer connections between Prince Rupert, Prince George, Dawson Creek, Fort St. John, Fort Nelson and Valemount.

BC Bus North includes service along Highway 16, the so-called Highway of Tears between Prince George and Prince Rupert, a route that was cut with Greyhound’s departure, causing considerable concern among Indigenous communities affected by dozens of murders and disappearances of women over the last few decades.

Terry Teegee, regional chief of the BC Assembly of First Nations, said short-term funding could again lead to unserviced routes in communities if private companies can’t make a profit so both levels of government need to make a long-term commitment to serving traditionally underserved areas.

The government has tried to address that issue by forming “working groups” in all 10 provinces that are considering long-term solutions for inter-city bus travel across Canada, Garneau said.

“We are trying to ensure that gaps are covered. It’s a vast province and we don’t want to leave anybody stranded without safe and affordable ground transportation,” Trevena said. “Highway 16 was highlighted and necessarily so. We now have a system running along Highway 16, not just BC Bus North.”

Teegee, a member of the Takla Lake First Nation, said governments need to consult with First Nations in order to get a good understanding of routes.

“Perhaps it doesn’t need daily service, perhaps every other day,” he said, adding other areas may need more service, especially during summer months when people tend to hitchhike when a bus doesn’t show up, putting themselves in danger.

“We’ve always stated that First Nations communities are underserved and transportation should be considered an essential service in that it is a priority,” he said.

The Saskatchewan government said in a statement it was forced to wind down the Saskatchewan Transportation Company in 2017 after a steady decline in ridership and millions of dollars in subsidies.

It said Ottawa offered a share of $10 million to western provinces to subsidize transportation routes but didn’t follow through on the province’s request.

“We wrote to minister Garneau asking for more information about the federal program and received no reply. Saskatchewan has encouraged the federal government to provide this funding directly to private-sector transportation companies to improve services for the people with disabilities, vulnerable people and northern communities.” 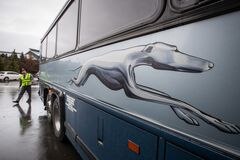