Survivors and family members touched by gun violence in Quebec are pressuring the federal government to move quickly to ban handguns and assault weapons, bringing a personal dimension to a politically contentious issue.

More than a dozen gun-control advocates came away from a closed-door meeting with Liberal MP Peter Schiefke on Thursday saying they were worried they would not see any results ahead of federal elections next October.

Bill Blair, Minister for Organized Crime Reduction, announced consultations on a possible ban this month, with no firm timeline for when the government might enact legislation. Gun-control advocates fear the Liberals will use the consultations to run out the clock before next fall’s vote.

“We’re now in the last year of the mandate of a government that was elected on the basis of doing something about handguns and assault weapons, and we’re very afraid that, because it’s a controversial issue, this is a way to postpone taking action until after the next elections,” said Heidi Rathjen, who speaks for the gun-control group PolySeSouvient.

Gun control has particular resonance in Quebec, which has been the site of some of the country’s worst mass shootings. Like others attending the meeting in Montreal with Mr. Schiefke, Ms. Rathjen brings a personal side to the campaign; she was an engineering student at the École Polytechnique when a gunman opened fire in 1989, leaving 14 women dead.

"It's been 29 years that we've had a very clear example of the damage that can be caused, the suffering that's caused, the loss of life, the destruction of families that can happen when one person, one ill-intentioned person, gets their hands on a weapon," she said.

Jean-François Larivée, who also attended the meeting, lost his wife, Maryse Laganière, at the Polytechnique. The couple had been married only four months. Mr. Larivée said he was disheartened that there was still no ban on the kind of weapon used by gunman Marc Lépine 29 years ago.

“It sickens me. That weapon killed my wife,” Mr. Larivée said of the Ruger Mini-14 rifle. “It should have been prohibited the day after the killing. And I’m still fighting – not just to ban that weapon, but dozens of others.”

He said he would keep up the campaign for the ban. “It’s my will to keep working for Maryse so that her death was not in vain.”

Others at the meeting included people who had loved ones injured at the Dawson College shooting in Montreal in 2006, which left one student dead; and a representative of the Quebec City mosque where six worshippers were gunned down in January, 2017.

Prime Minister Justin Trudeau has faced pressure to introduce tougher gun laws since the mosque attack as well as this year’s shooting along Toronto’s Danforth Avenue, which killed two people and left 13 people injured in July. Both Montreal and Toronto city councils have called on Ottawa to bring in bans on handguns and assault weapons.

Mr. Blair has said he wants the consultations to wrap up by the end of the year. This would push potential legislation to next year, leaving little time for debate before the House of Commons rises for the launch of an election campaign.

The groups attending the meeting say they intend to maintain pressure on Ottawa even after the meeting with Mr. Schiefke, who is parliamentary secretary to both Mr. Blair and the Prime Minister. They said public opinion polls support prohibitions on handguns and assault weapons.

“We know it’s a controversial issue,” Ms. Rathjen said. “We know the government may lose votes among the gun-owning community. But we are talking about saving lives.”

Opinion
Police forces across the country should give up their weapons
October 5, 2018 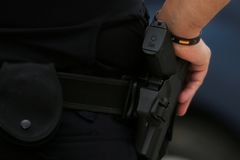