A 2017 “fact-finding” report, commissioned by the Canadian Radio-television and Telecommunications Commission (CTRC) and never released publicly, found that the system is a potentially dangerous patchwork that lacks government leadership.

“No one is ‘boss’ of public alerting in Canada,” one stakeholder said in the 16-page CRTC document, obtained by The Globe and Mail.

In the wake of the killings in Nova Scotia’s Colchester County in April, the RCMP in the province and government officials have been criticized for failing to adequately alert the community as a gunman went on a 13-hour rampage killing 22 people before he was shot dead by police.

The emergency alert system was never used during the shootings.

During the final stages of the violence, provincial officials and local RCMP officers were trying to put together such a message, one that could have gone directly to people’s cellphones in the affected area. But issues surrounding communications protocols and how to craft the alert meant that it was never completed. Instead, the Mounties put out warnings about the gunman only through Twitter – a social-media service that most people don’t use in rural regions.

N.S. Justice Minister Mark Furey has said that he will soon announce a public inquiry into how police handled the emergency.

Provincial emergency-management organizations (EMOs) across Canada have the capability to send blaring warnings to people on TVs, radios and, since 2018, cellphones.

This capability exists because of the national public alert system, but Nova Scotia ranks among its most infrequent issuers. Most of the time, the system draws the public’s attention to severe weather events. Prior to the April killings, it had never been used to warn about an active shooter anywhere in Canada.

The regulatory body conducted interviews with “key stakeholders,” including representatives of broadcast and telecom corporations and also federal and provincial public servants.

Their voices were quoted but not named by the CRTC in a bid “to encourage openness and the sharing of information.”

Commenting on why the report was not released publicly, commission spokeswoman Patricia Valladao said: “The CRTC commissions studies and reports on a regular basis. As part of its normal practices, not all reports are made public.”

Critics say the alert system’s problems flow from governance gaps. Three years ago, stakeholders urged that such problems be fixed.

“Many policy issues will have to be dealt with once wireless [alerting] is in play, such as ‘what is an alert, who issues it and when, can police forces use the system,” one stakeholder said in the CRTC’s “2017 Fact-Finding Report: Governance for Public Alerting.”

The critics canvassed in the report pointed out that police often lack authority to initiate alerts because the overall responsibility for doing so rests with provincial EMOs.

But the most fundamental problem was said to be that federal and provincial governments were shirking their collective responsibility to build a cohesive system. “If it is a national alerting system, it needs to be truly national. We cannot say to all Canadians that you will always get the alerts. It depends on where you live,” a stakeholder said.

The CRTC sought this feedback because, since 2009, it has presided over an arrangement involving the National Alert Aggregation and Dissemination system. NAAD is the system’s technological infrastructure and creates a common forum for three types of stakeholders – the alert issuers (governments), the alert disseminators (telecom and broadcasting corporations) and also the alert aggregator.

The aggregator is Pelmorex Corp., a cable-TV company based in Oakville, Ont., that is best known for running The Weather Network. Years ago, the company built the NAAD infrastructure out of its own corporate budget. The company continues to staff, fund and own it.

Several stakeholders who spoke to the CRTC for the 2017 report praised this arrangement as cost efficient. “All the costs associated with public alerting are borne by Pelmorex, which alleviates financial pressures on jurisdictions with resource constraints,” the report says.

Others criticized the arrangement as the ultimate abdication of responsibility, given how public officials in Canada had never themselves come together to craft effective policy and funding arrangements for the alert system.

“What you have done is put the single most important thing that the government can and must do – ensure public safety – in the hands of the private sector, whose job it is to make money. Think about the inherent risk,” a stakeholder was quoted as saying.

The NAAD system is the result of decisions made years ago. Then, federal officials promised to try to bundle together Canada’s balkanized alert systems into an overarching national one. After that initiative failed, Pelmorex persuaded the CRTC to put the cable-TV company in charge of building the technological infrastructure.

Pelmorex argued that it could be compensated for this if the CRTC were to award the cable company a rare “must carry” licence, meaning all cable-TV subscribers in Canada would have to pay for The Weather Network. The boosted revenue would offset the costs for the alert infrastructure.

The CRTC – which had no responsibility for alerting issues before the agreement with Pelmorex – approved the deal in 2009. It remains in place today even though decision makers of the day viewed it as a stopgap measure.

“I was worried, quite frankly, we would be without a system and the blame would fall largely on the CRTC,” Konrad Von Finckenstein, the commission’s chair at the time, told The Globe.

In an interview, the retired civil servant said the decision to give Pelmorex responsibility for the public alert infrastructure was intended only to last until governments got their acts together. “It’s a strange way of financing an emergency system through Pelmorex, which is a weather forecaster,” he said.

“We’re super proud of this and it’s something that we intend to do forever,” Pelmorex executive Kurt Eby said of the company’s role in administering the infrastructure.

In the 2017 CRTC fact-finding report, the federal department with ostensible responsibility for mitigating national disasters was often said to be missing in action.

Public Safety and Emergency Preparedness Canada “does not lead in this space,” a stakeholder told the CRTC.

Several critics complained that the department’s lack of leadership meant that provinces would never be brought toward enforceable common standards. “The federal government needs to assert itself – whether Public Safety or some other authority – stipulating ‘When there is a crisis, you need to listen to us and follow our rules,’ ” another stakeholder said.

The problem with this argument is that Ottawa sees alerts as an area where provinces should lead. For this reason, Public Safety Canada’s messaging is that it can only be a team player – and never the quarterback.

One year after producing its fact-finding report, the CRTC’s commissioners tried to draw attention to the system’s weaknesses.

In an August, 2018, ruling on the status of Pelmorex’s broadcast licence, the commission called upon governments to step up and take over the areas of alerts managed by the CRTC. The public ruling said these responsibilities “would be more appropriately situated with and supported by organizations more directly responsible for public safety, or with a single, nationwide authoritative policy-making body supported by those organizations.”

The CRTC even set a clock on the current arrangements, saying that it will not be inclined to renew them when they expire in 2023.

But the federal government is still not committing to anything new. “Protocols for public alerting in emergency situations are determined by local alerting authorities and the police of jurisdiction,” said Mary-Liz Power, a spokeswoman for Public Safety Minister Bill Blair. 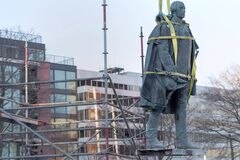