A combination of intense heat and drought conditions is causing wildfires in Western Canada to generate their own weather systems, experts say.

Michael Fromm, a meteorologist with the United States Naval Research Laboratory, said the phenomenon is known as a pyrocumulonimbus firestorm and has been tracked this year in British Columbia, Saskatchewan, Alberta, Manitoba and Ontario.

Scientists have been tracking the storms since May. The first one was seen this season in Manitoba, Mr. Fromm said in an interview Monday.

The village of Lytton in B.C. saw firestorms on two successive days in late June, he said.

“It was probably the single largest pyrocumulonimbus storm of the year so far,” he added.

“In fact, we’re still tracking the smoke plume from that storm as it’s travelling around the world and it’s about to kind of come full circle back over U.S.A. and Canada.”

An abundance of fuel, heat and wind create perfect conditions for the firestorms.

Lytton hit a Canadian temperature record of 49.6 C the day before a wildfire erupted there, destroying much of the community.

“When you get all those three things together, you get the perfect triple that we call fire weather,” Mr. Fromm said. “So, hot, dry and windy.”

Simon Donner, a climate scientist from the University of British Columbia’s geography department, said the storms also generate lightning that cause more fires.

“The fire creates the storm, and then the storm creates lightning, which can cause more fires,” he said.

“That runaway feedback is the dangerous part.”

Above average temperatures for many parts of B.C. aren’t expected to ease soon. Environment Canada said there is no hint of showers until at least the weekend for some southern regions that have been hit hard by wildfires.

Emergency Management BC said more than 250 active wildfires were burning in B.C. on Monday afternoon. Since the fire season began April 1, 4,142 square kilometres of land has been charred from the 1,216 wildfires that had started as of Sunday night.

At that time, there were 58 evacuation orders in effect, which affected 4,260 properties. Another 83 evacuation alerts were in place, meaning people living at more than 17,500 properties had been told they should be ready to leave their homes on short notice.

The risk remained high to extreme over most of southern B.C. on Monday. The B.C. Wildfire Service said 40 blazes were ranked as fires of note, meaning the flames were either highly visible or posed an immediate safety risk.

B.C. is to get more help Tuesday in battling the fires, with 34 Australian firefighting personnel joining 113 from Quebec and 101 from Mexico.

The weather office is predicting lighter winds over several of the most challenging fires, including the 68-square-kilometre Nk’Mip Creek blaze in the south Okanagan between Oliver and Osoyoos. But forecasters said temperatures there won’t budge from the mid- to high-30s all week, and there’s no sign of rain.

Showers could dampen parts of southeast B.C., where fires on both sides of Upper Arrow Lake have forced evacuation orders or alerts for hundreds of properties.

However, Environment Canada said the chance of rain is just 30 per cent and it won’t come until Saturday at the earliest.

Mr. Fromm said a pyrocumulonimbus storm usually begins with a smouldering fire, which feeds on the surrounding air turning active and creating a thermal bubble. That creates a convection column that generates more energy and turns the fire hotter and larger, he said.

“It’s just like if you have a stove and you have a small burner – you’re not going to get as much of a fast boil in your pot as if you had a really hot, intense burner,” Mr. Fromm said.

“So, the big, large fire just makes it that much easier for the air to be completely upset. And then if you do form a cloud, then that generates even more buoyancy and that feeds back down to the fire.”

As the cloud goes “bubbling” into the air, it can create lightning, Mr. Fromm said.

The storms last anywhere between two and five hours, occur in the late afternoon, and end when the air turns cooler or it runs into a fire break, he said.

“When you look at it, you know, say from space as we do, you can actually see several bubbles of cloud form and flatten out up in the upper atmosphere,” he said.

“Then they blow off and then you see another bubble coming up, like several chimney bursts in the life of that individual pyrocumulonimbus. So, on the ground, what that means is that fire is pulsating in a way that during those two to five hours is a very dramatic and dangerous event.” 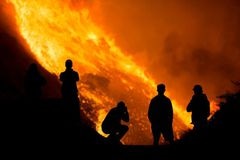 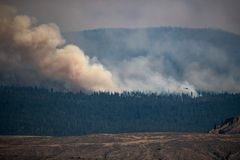 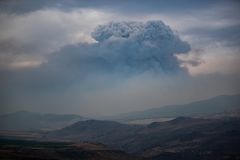