A nasty winter storm spent Sunday thrashing parts of Central Canada and the Maritimes as officials braced for the fallout from as much as 50 centimetres of snow in some areas and flash flooding in others.

New Brunswick was expected to shoulder the worst of the snowfall, but climbing temperatures also threatened freezing rain and later up to 40 millimetres of rain in some areas. Environment Canada warned residents in the Fundy coast regions to be aware that strong downpours and rapid snowmelt can trigger flash floods.

Geoffrey Downey, a spokesperson for the province’s department of public safety, said localized flooding is always a concern when it rains and the ground is frozen. He recommended that homeowners clear out any debris from drains around their property. Of equal concern, he said, is the risk of freezing rain because of its impact on infrastructure, such as power lines.

“There are parts of the province that are still quite cold, so if people start losing power and the temperature drops again, that’s where we really have to be concerned about people’s safety,” he said.

For Central Canada, this weekend brought the first real bite of winter. In Quebec, a section of the Trans-Canada Highway near the New Brunswick border was closed on Sunday, and Montreal’s annual Fête des neiges event was cancelled because of due to extreme cold weather. (It will resume Saturday.)

Much of Ontario was under an extreme weather advisory, with Ottawa residents juggling both an extreme cold alert and a winter storm warning. About 25 centimetres of snow was expected over the weekend. As of Sunday evening, the frigid air hit Arctic cold, with warnings of -35 C to -40 C temperatures with the windchill.

The Ontario Provincial Police recorded 350 collisions in the Greater Toronto Area between Saturday and Sunday afternoon, while Toronto police clocked just under 100.

In Toronto, temperatures were forecasted to dip as low as -23 C overnight Sunday, or -36 C with the windchill. The cold snap brought a 96-per-cent increase in service calls for furnace and hot water issues compared with last Sunday, said Mike Kolatschek, a communications manager with Reliance Home Comfort.

It is the coldest stretch that Southern Ontario has seen so far this year, said Peter Kimbell, a warning preparedness meteorologist with Environment Canada. “And the cold is not going away,” he said. Although the temperature is expected to climb back above 0 C around Wednesday, Mr. Kimbell says all the signs point to a return to chilly conditions in Southern Ontario after that. “It’s winter time. Expect it to be cold. It is cold,” he said.

Additional beds have been made available at Metro Hall and other emergency respite areas across the city.

“Last night everybody who sought service or asked us for a referral received a space to stay. We consider that is a success,” he said, adding that if an individual arrives at a shelter that’s at capacity, the city can provide transportation to another location during these extreme temperature conditions.

“Some people prefer to travel on their own and in those cases we’ll provide them with TTC [transit] tokens to get to the additional site.”

In Nova Scotia, rain and wind battered the province, with the frozen ground again creating the potential for treacherous driving conditions and possible localized flooding in low areas.

In parts of Prince Edward Island, a winter storm and wind alert remained in effect Sunday evening, with Environment Canada warning of freezing rain, ice pellets and gusts up to 90 kilometres an hour. “The accumulated snow on the frozen ground combined with the expected rainfall of at least 20 mm and milder temperatures tonight followed by rapidly falling temperatures with risk of freezing rain and flash freeze conditions on Monday could lead to treacherous conditions,” an advisory cautioned.

In Winnipeg, where temperatures hit a low of -27 C, Monday was expected to bring slightly warmer weather – although warmer in Winnipeg is still -15 C with a chance of flurries.

Worst is over for deadly winter storm that pummelled parts of U.S.
Subscriber content
January 14, 2019 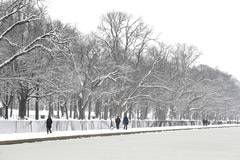 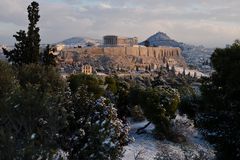