The financial health of Ontario universities, particularly smaller schools outside the big cities, is under greater scrutiny as the provincial government threatens to impose financial oversight measures in the wake of Laurentian’s insolvency.

The president of the Council of Ontario Universities, Steve Orsini, says he doesn’t know of any institution in a predicament comparable to the one that forced Sudbury-based Laurentian University to file for creditor protection last week. He says the sector is transparent and every institution has for years made all its financial reports publicly available.

But Mr. Orsini said the minister has all the access he needs. “When it comes to transparency and accountability, we’re there,” he said.

But there’s no doubt that recent provincial policy, including a tuition cut and a tuition freeze, has affected some institutions profoundly, said Mr. Orsini, who leads the umbrella group representing 20 Ontario universities.

The COVID-19 pandemic, and resulting expenses and lost revenues have added an additional cost to Ontario universities of about a billion dollars so far, Mr. Orsini said. The schools have found savings and cuts to cover about half that amount, he said, but they’re also seeking extra funding from the province.

The government did not step in to bail out Laurentian before it sought creditor protection.

Laurentian’s crisis was exacerbated by the pandemic, but its problems stem from several years of deficits and a difficult enrolment picture. Other Northern universities, such as Lakehead, Algoma and Nipissing, say they are not in a similar situation, but the unexpected insolvency of a Canadian public university has intensified their focus on budget planning.

Provincial government support for higher education has largely stagnated for a decade. In 2019, a 10-per-cent domestic tuition cut imposed by the Conservative government reduced university revenue, and two years of tuition freezes have meant that even as labour costs grow, domestic tuition revenues do not.

Many universities have turned to international student fees to make up the difference. But only about 3 per cent of Laurentian’s student population is international, compared with an average of about 20 per cent at many other Ontario schools.

Ken Steele, a postsecondary education consultant, said many institutions are feeling financial pressure and governments have so far been unwilling to issue bailouts.

“I don’t believe that any government is going to let a major public university fail,” Mr. Steele said. “I think they want to see Laurentian get a whole lot closer to sustainable before they offer any support. I think this is tough love.”

“Having more domestic students, that’s actually pretty hard for most Ontario universities these days, because the population aged 18 to 24 is not growing in most of the province,” he said, with the exception of the Greater Toronto Area.

Institutions in Northern Ontario tend to be in the most difficult position when it comes to enrolment. They have shrinking local university-age population and often struggle to attract international students, Mr. Trick said. They are also considered “access” universities, which have among the lowest tuition fees to attract a student body that tends to have higher rates of students on provincial assistance and who are often the first in their family to attend university.

Lakehead University, in Thunder Bay, said it has managed declining provincial funding and tuition cuts with financial mitigation strategies. Kathy Pozihun, vice-president of finance, said the most important measure has been a board-mandated requirement to run annual balanced budgets, in place since 2004.

Algoma University hasn’t run a deficit in several years, it said, and has seen enrolment grow, thanks in part to its branch campus in the fast-growing Brampton area. It expects to balance its budget this year.

Nipissing has only about 60 international students among its 4,500 student body, but has a plan to increase that number by eight times over the next five years, Ms. Sutton said. For the moment, the pandemic has hampered that strategy, however, leaving cost cutting and the possibility of help from the provincial government top of the agenda.

Last year, some universities received additional provincial funds of up to $5-million each to offset the impact of the tuition cut and freeze, but Ms. Sutton said it’s still not clear whether that money will be coming this year, or whether there will be additional funds to cover some of the pandemic-related revenue losses stemming from the loss of campus catering and residence fees.

“The Laurentian experience has made us all sharpen our pencils and think about how to overcome the challenges in the system,” Ms. Sutton said. 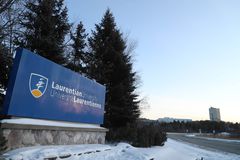