The past few months will not soon be forgotten in Merritt, B.C.

During a record-smashing heat wave that devastated British Columbia this past summer, its population of more than 5,000 people endured temperatures reaching 44.5 C. Soon after, it was racked by drought conditions and was the subject of an evacuation alert because of nearby forest fires. And on Monday, an evacuation order for the entire B.C. Interior city was issued in the face of epic flooding.

These climate-change-fuelled extreme weather events are connected: With intense heat comes wildfires, and with wildfires come changes to the soil and vegetation that can exacerbate the effects of heavy rainfall.

Similar scenes played out across B.C. Other communities that have suffered extreme flooding and landslides include Princeton, Abbotsford and Hope.

Bridges were washed out, and numerous highways were cut off in both directions by multiple mudslides and flooding. Some stranded motorists were evacuated by helicopter. At least one person has died.

It’s all because of heavy rainfall from a phenomenon known as an “atmospheric river.” They occur commonly throughout western North America, but this one has dumped atypical amounts of precipitation throughout the region.

According to preliminary Environment and Climate Change Canada data, 20 communities across B.C. experienced record rainfall for a Nov. 14, including Abbotsford, Langley, Nanaimo, Vancouver and Victoria. Though the final tallies aren’t in, for some communities those are historic records.

“Abbotsford and Hope had their wettest days in their record-keeping,” said Armel Castellan, a warning preparedness meteorologist with Environment Canada. “It’s certainly above a 50-year return period, and actually over 100 in many locations.” (A 1-in-100-year event has a 1-per-cent probability of occurring in any given year – that is, exceedingly rare.)

Recent research has shown a rising trend in atmospheric rivers making landfall on North America’s West Coast in recent decades. As the world continues to warm, they’re expected to become even more frequent and more intense.

“It’s so important to point out the role that climate change plays in these kinds of events,” said University of British Columbia climate scientist Simon Donner.

What is an atmospheric river?

An atmospheric river is an intense and narrow band of moisture-laden air commonly associated with mid-pressure cyclones that bring heat and moisture from the tropics to the poles. They’re a bit like high-altitude air currents, such as the jet stream, except they’re concentrated in the first several hundred metres above the Earth’s surface.

They’re long (more than 2,000 kilometres), narrow (up to a few hundred kilometres wide) and can be up to a few kilometres deep. According to a Journal of Hydrometeorology study cited by the National Aeronautics and Space Administration, the passage of an atmospheric river over a coastal site takes on average 20 hours. 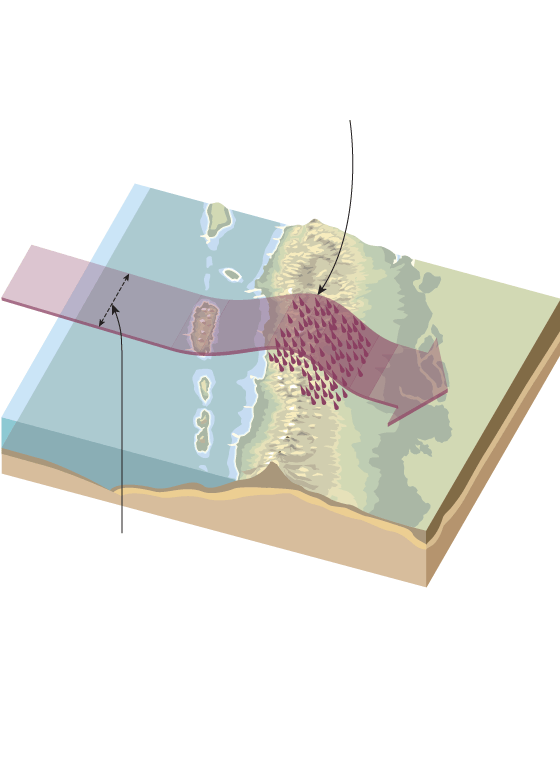 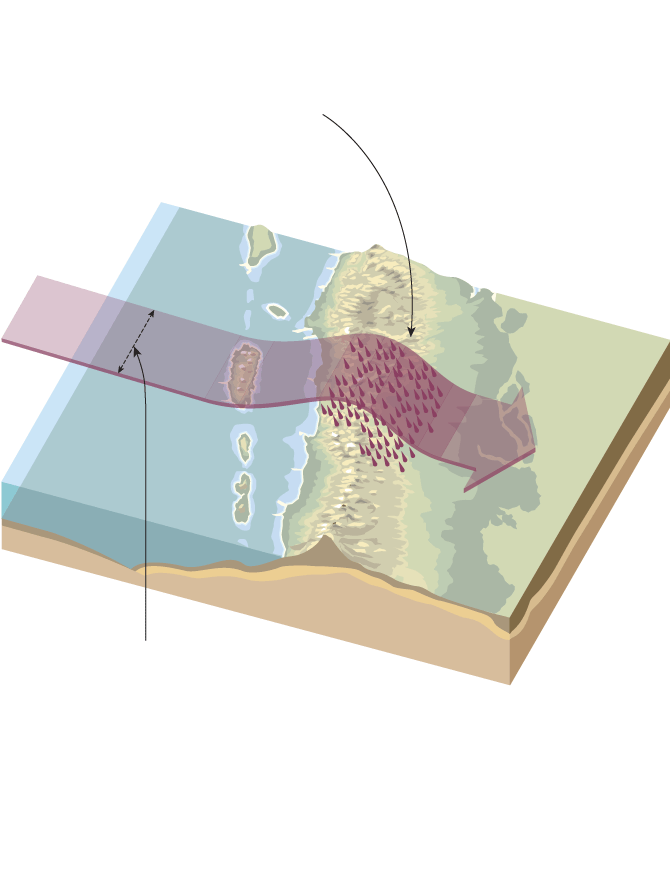 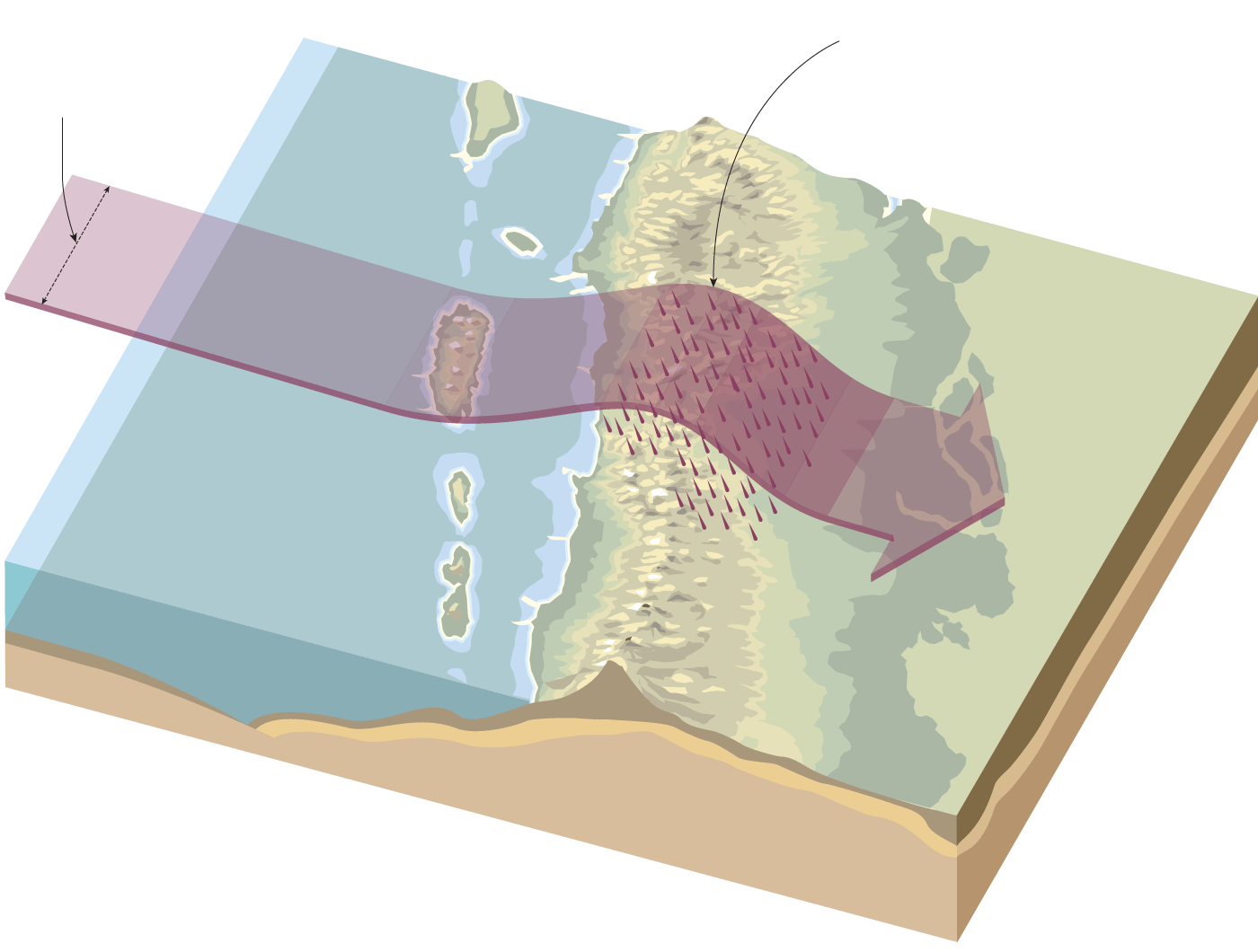 Atmospheric rivers can transport mind-boggling quantities of water vapour – as much water as discharged by a large river, and often far more. During a 2017 lecture, atmospheric scientist Martin Ralph of the Scripps Institution of Oceanography said an atmospheric river can carry 25 times more water than the Mississippi River.

Atmospheric rivers often release that water as rain or snow after making landfall. Because they transport so much water, they’re vital for many aspects of local hydrology, from precipitation to climate to water supplies: In some coastal areas of western North America, as much as half or more of annual precipitation falls from storms resulting from atmospheric rivers.

According to a 2014 report commissioned by the B.C. Ministry of the Environment and Natural Resources Canada on the future of atmospheric rivers in the westernmost province, the B.C. coast receives upward of a quarter of its total annual precipitation from atmospheric river events. They tend to arise in the fall and winter.

Atmospheric rivers that flow over B.C. originate in the tropical and subtropical Pacific; this area includes the Hawaiian Islands, which is why an atmospheric river is sometimes dubbed a “Pineapple Express.”

THE GLOBE AND MAIL, Source: SPACE SCIENCE AND ENGINEERING CENTER, UNIVERSITY OF WISCONSIN

Why did this atmospheric river dump so much water?

The problem is that some atmospheric rivers release excessive amounts of water – and have a nasty tendency to stall, dumping their contents onto a small geographic area. When that happens, atmospheric rivers often cause flooding and landslides. They’re notorious for doing so in the western United States. And that’s what we’ve seen in B.C. in recent days.

Prof. Donner at UBC said a combination of factors conspired to make this latest atmospheric river over B.C. so dramatic – the duration of the event, which lasted roughly three days; the sheer volume of water vapour in the moisture corridor; and a La Nina weather pattern known to create jet stream conditions conducive to transporting moisture northward from the tropics. “There are times you can feel the atmospheric river effects for a couple days in a row, but this level of intensity was incredible,” Prof. Donner said. “It was like being in a tropical hurricane, in terms of the rainfall.”

Why did it cause so much damage?

This extraordinary amount of rainfall would have caused extensive damage even under more benign circumstances. But it coincided closely with other phenomena that made it worse.

To begin with, much of the affected area had experienced drought just months earlier, accompanied by wildfire in some cases. Mr. Castellan at Environment Canada said this reduced vegetation and primed soils for structural failure. ”I’m not surprised to see the releases of landslides and mudslides and debris flows in the Fraser Valley, the Coquihalla and the Lytton corridor and so on,” he said.

Mr. Castellan added that many affected areas previously had snowfall, including at mid-elevations on mountainsides. “When you dump a lot of rain on that snow, it melts very quickly,” he said.

Compounding matters, much of B.C. has already experienced a particularly wet autumn. “The soil was already saturated when this rainfall event came,” said Jeremy Venditti, a professor of environmental science at Simon Fraser University’s Centre for Natural Hazards Research. “And so the water had nowhere to go but run off into rivers, ditches and creeks.”

What’s the connection between heat, fires and floods?

Hot, dry, windy weather is strongly associated with fire, and the bulk of the woodland burned in Canada each year is often consumed during a few critical days of extreme fire weather. Intense heat allows whatever moisture is present to be sucked out of the brush, creating tinder-like conditions that allow fires to start and spread easily.

Those fires, then, affect the organic compounds in the soil, causing the soil to essentially become water-repellent or, in more scientific terms, hydrophobic. This decrease in water absorbency can cause increased erosion and is associated with an elevated risk of flooding.

How does climate change tie into all of this?

More warm weather and more frequent extreme weather events, including heavy rainfall, are among the most consistently predicted outcomes of climate change owing to human-generated fossil fuel emissions. This certainly applies to Canada, which is projected to warm about twice as much as the global average for a range of climate scenarios.

In a monolithic report released in August, the United Nations’ Intergovernmental Panel on Climate Change predicted that precipitation from atmospheric rivers will increase in most regions. “The average and maximum rain rates associated with tropical and extratropical cyclones, atmospheric rivers and severe convective storms will therefore also increase with future warming,” the report says.

Slobodan Simonovic, professor emeritus at the University of Western Ontario’s environmental engineering department, said some parts of the world are experiencing one extreme after another. “In the central valley in California, [about] two months ago, we saw disastrous droughts and fires, and a month ago they had rains they were afraid might destroy agriculture,” he said. “There were other examples in northern China in June.”

What does the future hold?

The 2014 report on the future of atmospheric rivers in B.C. predicted that the province will experience larger increases in overall precipitation than the global average, as well as more extreme events, particularly in coastal areas. Under a high-emissions scenario, the report projects, the average number of atmospheric river days a year will approximately double at most locations.

Other areas of western North America also need to worry about increased precipitation from atmospheric rivers. In the U.S., California experiences the greatest volatility in water resources of any state. According to a 2019 study by the Scripps Institution of Oceanography, climate change will bring even greater vacillations between droughts and floods. The study also says atmospheric rivers will arise less frequently over the state, but when they do they’re expected to dump more water, more suddenly.

In Canada, atmospheric rivers are less common in areas beyond the West. But although B.C. has suffered greatly this year, the risk of climate change-fuelled weather events “is shared across the country,” said Joanna Eyquem, a managing director at the Intact Centre on Climate Adaptation.

Ms. Eyquem said Canadians must take steps now to adapt to the global warming that’s already baked into the future of our planet; preparations for next summers’ heat waves must already be under way, because one climate-change-fuelled weather event feeds the next.

Atmospheric rivers “can be extreme but they’re not unforeseeable,” Ms. Eyquem said. “We know they’re going to happen more frequently, so we need to move into emergency mode.”

Environment reporter Kathryn Blaze Baum joins The Globe and Mail’s daily news podcast to explain what caused the rainstorms that hit B.C. and how this summer’s wildfires and heat made the damage worse. Subscribe for more episodes.

Hope amid the chaos: Disaster brings out the best in flood-hit communities

B.C. floods will be Canada’s most expensive natural disaster this year

Trans Mountain pipeline, construction on expansion shut down due to B.C. flooding