Genetically modified salmon raised in Prince Edward Island are poised for the leap to grocery shelves, a Canadian first that has left traditional producers concerned about setting their farmed fish apart.

Environment Canada recently gave notice it has approved U.S.-based AquaBounty to grow the salmon at its site about 74 kilometres east of Charlottetown.

AquaBounty said in a release it would begin stocking its Rollo Bay facility “as soon as possible,” with the first harvest of AquAdvantage salmon estimated late next year.

Sylvain Charlebois, director of the agrifood analytics unit at Dalhousie University, said it’s likely AquaBounty “production will be ramped up in Canada.”

“It’s a huge advantage for AquaBounty to be allowed to produce this salmon in Canada,” he said in an interview.

AquaBounty, based in Maynard, Mass., has said its salmon will contain genetic material from chinook salmon that help it reach adult size faster, creating a less expensive product.

Health Canada said it doesn’t see any need for a mandatory label to allow consumers to spot the genetically modified fish, but existing producers said they may call for that to change.

“We are reviewing it,” said Tim Kennedy, executive director of the Canadian Aquaculture Industry Alliance.

“Will there be a disruption in the … entire salmon market? We hope not. But I will say if that’s a possibility, then the response will be: somebody has to label.”

The Environment Canada certification has been most strongly opposed to date by environmental groups, which continue to argue there’s a risk to wild Atlantic salmon if there’s an escape.

However, the certifications in Canada and the United States could draw the traditional aquaculture industry and its lobbyists more closely into the debate, depending on how consumers react to the news of AquaBounty’s products entering the market some time next year.

Mr. Kennedy said a push for labelling could come next.

“We are reviewing it. We recognize the United States is moving forward with mandatory labelling, as is the European Union,” he said.

“Does it make sense from a trade perspective to align more closely with our major trading partners?”

He said the industry could consider setting up a non-GM label, similar to the labelling of organic foods.

In a February letter to the Canadian Biotechnology Action Network – an active opponent of GM salmon – the department said it prefers “industry-led initiatives such as voluntary standards,” and “the government of Canada intends to maintain its current approach.”

Mr. Kennedy said this leaves the question of who should pay for a massive labelling redo.

“Who bears the burden of that transparency? I don’t think it should be our producers because we’re not the ones putting the new product into the market,” he said.

Meanwhile, it remains unclear how significant the level of production in PEI will be in the Canadian market.

The company declined a request for an interview with its CEO about its plans going forward for production in Prince Edward Island, providing references to news releases.

Over the past two years – as it awaited its Environment Canada licence – the company had shipped eggs to Panama for growing, before the salmon were imported back to Canada and other destinations.

Mr. Charlebois says the federal decision means the firm can ship more directly to markets, particularly processors that might use the GM salmon in products ranging from sushi to pies to pates.

In the United States, the Food and Drug Administration has given the green light to the AquaBounty production in Indiana, subject to a new regulation that will require it to disclose when a food is genetically modified.

That has come amidst a pending lawsuit by a coalition of consumer, environmental and fishing groups that still hopes to block the sale through the courts.

Opponents have also criticized the upcoming U.S. labelling system, which they say uses the term “bioengineered,” a less familiar phrase than “genetically modified.”

Also, under the rules coming in 2020, companies will be able to provide disclosure of the GM salmon through codes that people would have to scan on their smart phones.

Lucy Sharratt, co-ordinator of the Canadian Biotechnology Action Network, says her group wants Canada to introduce a more transparent labelling system that consumers can easily see on any package.

“The lack of genetically modified food labelling is just the most obvious transparency issue undermining public trust,” she told parliamentarians in a hearing last week. 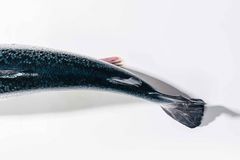