Almost 80 years after the last homes of the Stoney Point Indigenous community were removed by the Canadian government on flatbed trucks to make way for a military base, the first new homes for their descendants arrived this week in the same manner.

The prefabricated homes are a welcome sight for Pierre George, brother of Dudley George, the Indigenous protester killed by an Ontario Provincial Police sniper in 1995. He was with a group of Indigenous activists who had reoccupied their ancestral land and the army buildings on it.

“It’s about time. I’ve been freezing here for 25 years,” says Mr. George, sifting through belongings accumulated in his former home, the military firehall. He and his son Lakota Mandoka are preparing for his move to one of the temporary dwellings. “It was so cold I might as well be sleeping outside.”

The arrival of the homes marks one of the first tangible signs of change in a conflict mostly frozen since the 1990s. A $95-million agreement was reached in 2015 between the Department of National Defence (DND) and the Chippewas of Kettle & Stony Point First Nation (CKSPFN) to return the land to the First Nation. The homes are a step toward turning Stoney Point back into a functioning community. About 50 people occupy the deteriorating buildings of the former military base.

The 20 homes provided by DND in partnership with the First Nation cost close to $5-million, with the funds coming from the department, said Kettle Point Chief Jason Henry in a video update to his community last year.

The land at Stoney Point was originally seized during the Second World War to train artillery troops, even though the First Nation had voted against surrendering it. The homes of about 14 Stoney families were moved a few kilometres to Kettle Point.

Chief Henry was on hand as the trucks carrying the first two temporary homes arrived on a grey February morning. “Seventy-nine years ago they hauled our homes out and ripped us off the land,” he said in a community video. “Today the first homes rolled back in; homes with safe drinking water, sanitary sewer connections, electricity, heat, without the contaminants these barracks are full of.”

The homes are interim, but represent a step toward long-term housing, Mr. Henry said. The First Nation is working with DND to determine when permanent structures will be built, he said.

Moving away from the old barracks should help Mr. George heal from post-traumatic-stress disorder, says his son. That condition was born on the night he drove 50 kilometres with his dying brother Dudley in a car, some of the way on a flat tire, to the nearest hospital.

Pierre and his sister Carolyn (Cully) were arrested for the attempted murder of Dudley, and thrown in jail overnight, according to the report from the Ipperwash Inquiry, which examined the events. Miscommunication between police units was to blame, the report said.

Mr. George says that day haunts him. “I still live it. I have a pretty sharp memory when it comes to that,” he says.

The temporary homes are expected to arrive in three phases, ending around Mar. 20, according to a newsletter sent to Stoney Point residents. Once the old army buildings are vacated, services will be cut and doors and windows removed. Demolition will follow, although dates for that have not yet been determined with the First Nation, a DND spokesperson said in an e-mail.

Mr. Mandoka, who is also slated to move into one of the temporary homes with his partner and two young sons, rejoices at the idea of moving from Sarnia back to the land where he lived for over 10 years as a child. “I get a good feeling the moment I pull in the gate, and the kids get the same excitement,” he says, adding “It just feels right out here. It’s a peaceful feeling you get. It’s hard to explain.”

The land still contains unexploded munitions. Exploring the open fields and woods as a child, Mr. Mandoka was aware of them, but says they aren’t a major worry even today. “You just use your common sense. We saw one spot near the tank range that had a lot of rockets, but we just stayed away from there,” he recalls.

DND had removed 154 unexploded munitions as of 2020 from the 1,050-hectare site. That work will continue for about 25 more years, and the land will be transferred to the Kettle Point First Nation “in parcels, as areas are cleared,” DND states.

Chief Henry, first elected in 2018, is not rushing to take back the land from DND due to the munitions. “There are bombs and environmental contaminants all over Stoney Point” he explains in the video. The cost of the cleanup is estimated to be around $300-million. If the band were to take ownership “we would be liable for anybody who gets killed, hurt or sick on the land,” he said.

While repairs have been done to her building, the former officers’ quarters, and her heating and plumbing usually function properly -- ”it only freezes once in a while” -- she still gets her drinking and cooking water in jugs from the outdoor tap at the gatehouse, a short but cold and slippery walk up the icy gravel road.

Cully’s prized rose bushes, some dating back to the 1980s, also factor into her desire to stay put for now.

“You can’t take them with you in the winter time; they’re so delicate.” 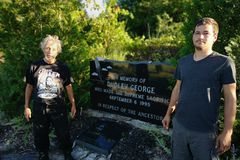 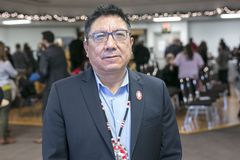 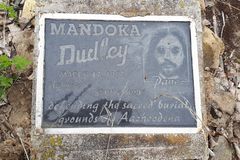