Commercial flights resumed in and out of St. John’s on Wednesday, one sign of normalcy returning to life in eastern Newfoundland as the region continues to dig itself out from last week’s record-breaking blizzard.

But as officials and residents in the provincial capital marked their sixth day under a state of emergency, they also worked through the murky rules of daily life in a city where people still face “unprecedented” challenges under shifting conditions.

As of Wednesday afternoon, about 400 Armed Forces personnel were on the ground in the region and had completed 380 tasks of an assigned 450, according to Lieutenant-Colonel Paul Williams, commanding officer of the Atlantic Canada immediate response unit.

“But that number is constantly changing, by the end of today we may receive an additional 200 [requests],” Lt.-Col. Williams said. He said most calls have been in the St. John’s immediate area, from people who need help getting out of their homes.

The city has been updating residents on a daily basis about businesses permitted to open as snow-clearing continues. Grocery stores drew lineups in the hundreds when they opened their doors on Tuesday for the first time since the storm.

“Personally, I was uncertain as to what we could do and what we couldn’t do,” said Anglican Rev. Jonathan Rowe, a board member at food bank Emmaus House.

After monitoring social-media conversations and speaking with a city councillor, Father Rowe learned Wednesday that food banks were welcome to open with grocery stores, but the city had not publicized that information.

He said the small food bank, which serves between 100 and 150 people each week, would usually close for the weather in co-ordination with the school board, but the extended state of emergency has created a new grey area for volunteers and for clients who rely on the food bank to get by.

On Tuesday night, city councillors attempted to clarify the rules around driving between the capital city and neighbouring communities such as Mount Pearl, which have lifted their own emergency measures during the day.

“If you live in St. John’s, you can only drive to another municipality if you work in one of the exempted business types. If you do not work in an exempt business, you cannot drive. You can, however, attempt to get a taxi, as there are no restrictions on taxi use,” Councillor Ian Froude wrote on Twitter Tuesday night.

“And the tangliness of this is not lost on me. Just trying to clarify,” he wrote in a follow-up tweet.

St. John’s Mayor Danny Breen said Wednesday evening the growth of municipalities nearby has changed the nature of response required since the last state of emergency in the 1980s. He said adjusting regulations with the province and other municipalities would be a priority going forward.

“The city has changed, the region has changed and we really need to modernize our regulations and processes,” Mr. Breen said.

The mayor did not provide a dollar figure about what the cleanup has cost so far, but said he would work with the provincial and federal government to potentially recover the costs.

He also said he’d work with provincial officials for solutions to assist people who are missing wages.

Constable James Cadigan with the Royal Newfoundland Constabulary said “some” tickets for violating emergency rules were issued over the weekend, but did not provide an exact number. Over all, he said officers are focused on safety.

“Even in scenarios when people are on the road, we want to make sure those people get home safely,” he said.

Alyse Stuart with Common Front NL, a workers’ coalition group advocating for a $15-per-hour minimum wage, said closings during the emergency situation have left minimum wage workers nervous about how they will meet basic costs such as heat bills and rent.

“This is unprecedented for a city to be closed this long. We see a lot of the cracks that were already there, but they just become a little more pronounced when these things happen,” Ms. Stuart said.

Ms. Stuart said the situation has also raised questions around what’s considered “essential” work, when gas station and grocery store employees have been required to work under the state of emergency, “but often don’t have salaries that reflect that.” 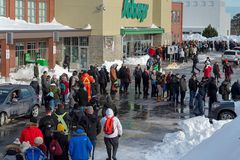 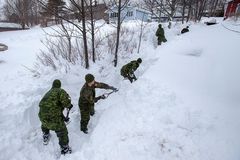