As parents across the country begin hauling their children to influenza vaccination clinics, many are being caught off-guard by the discovery that a painless alternative to the traditional shot won’t be available in Canada this year.

The company that makes FluMist, a nasal-spray version of the vaccine, warned Health Canada in April that it would not be shipping any doses to this country for the 2019-20 flu season after production challenges left the drug maker with a limited global supply.

It is the first time since public funding of FluMist began in the 2012-13 season that needle-phobic Canadian children won’t have access to an inhaled flu vaccine, and that lack of availability comes as pharmacists across the country are also reporting delays in receiving their full orders of the injectable vaccine.

Natalie Cousineau, an emergency-room doctor and mother of two from Barrie, Ont., said this year was a departure for her children, Logan, 11 and Maëlle, 9, who had inhaled their annual influenza vaccines for as long as they both could remember.

Maëlle’s worries grew as she watched first her father and then her brother receive quick jabs in their upper arms at a community pharmacy.

“She started with the nervous giggle, which led to the full-out hyperventilating," Dr. Cousineau said. “I think she probably got a little more anxious than we expected, but she sucked it up and she didn’t melt down. She tolerated it.”

In the end, she had no choice. Her mother is a self-described “huge vaccine advocate” who has spent years impressing upon her children the importance of immunization.

Barry Power, senior director of digital content for the Canadian Pharmacists Association, is concerned that parents who aren’t as committed to vaccinating their children against the flu will be deterred by the lack of a nasal-spray option.

“For kids who are particularly needle-phobic,” he said, "that could be the deciding factor for this year.”

However, Mr. Power pointed out that the nasal spray was a small portion of the overall influenza vaccine supply in Canada last season – the Public Health Agency of Canada put the figure at 2 per cent – and its lack of availability appears unconnected to delays in delivery of the traditional shot.

“What we’re hearing is that when pharmacies order their flu-shot supply, they get part of it. They rarely get the whole thing,” Mr. Power said. “It seems to be a widespread problem affecting anybody who’s involved in the delivery of flu shots.”

The Public Health Agency of Canada (PHAC), which manages the country’s flu-shot supply, has acknowledged there were delays in the shipping of shots this fall, a short-term lag the agency traced back to the World Health Organization’s unusual decision to postpone by about a month its recommendation for one strain of the virus to be included in the 2019-20 flu vaccine for the Northern Hemisphere.

However, Anna Maddison, a spokeswoman for PHAC, said that more than 95 per cent of Canada’s total influenza vaccine supply is now available to provincial and territorial governments, which are responsible for allocating the shots to pharmacies, doctors’ offices and public-health clinics.

A small portion of Canada’s order of a high-dose vaccine for seniors is still outstanding, Ms. Maddison added, but the remaining supply is expected to be delivered by the end of this month.

Candice Bruton, a spokeswoman for FluMist maker AstraZeneca Canada, said by e-mail that the global shortage is affecting supplies in other countries as well, and that Canada is not the only place where FluMist is completely unavailable.

Unlike traditional flu shots, FluMist is a live, weakened version of the influenza virus that patients inhale, one time in each nostril.

In 2011, Canada’s National Advisory Committee on Immunization recommended FluMist as the preferred influenza vaccine for children between the ages of 2 and 17.

The committee, which advises PHAC, dialed back its enthusiasm for the nasal spray when its American counterpart, concerned about U.S. data that showed the inhaled vaccine was less effective than the shot, withdrew its support for FluMist for the 2016-17 and 2017-18 flu seasons.

Canada’s committee continued to recommend FluMist during that period, but downgraded its recommendation to say the inhaled vaccine was no better than the traditional shot.

There are many ways to mitigate the pain of a flu shot, said Samina Ali, an emergency physician at Edmonton’s Stollery Children’s Hospital and senior author of the Canadian Paediatric Society’s new position statement on managing pain and distress for children undergoing brief procedures.

She recommends applying numbing cream beforehand and, if children aren’t too big, putting them on your lap and wrapping them in a “teddy bear hug.”

Distractions, including smartphone videos and hand-held video games, can be a huge help, Dr. Ali added. “This is not the moment to be the technology police.”

Toronto Board of Health urges provincial changes to boost vaccination amid protest in City Hall
September 23, 2019 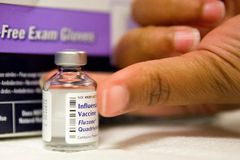 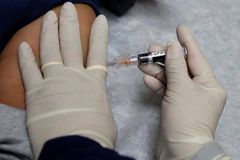