Their panic rose along with the surging waters. Only moments after dining on fried chicken with a glass of white wine, Lorraine Nadon and Maurice Labelle were fleeing their home in Sainte-Marthe-sur-le-Lac, under insistent orders from police.

“Evacuate, evacuate, evacuate,” the cry came, setting off a mass migration of 6,000 people to seek higher ground. A dike holding back the floodwaters of the Lac des Deux Montagnes had burst, driving torrents of frigid water into town. 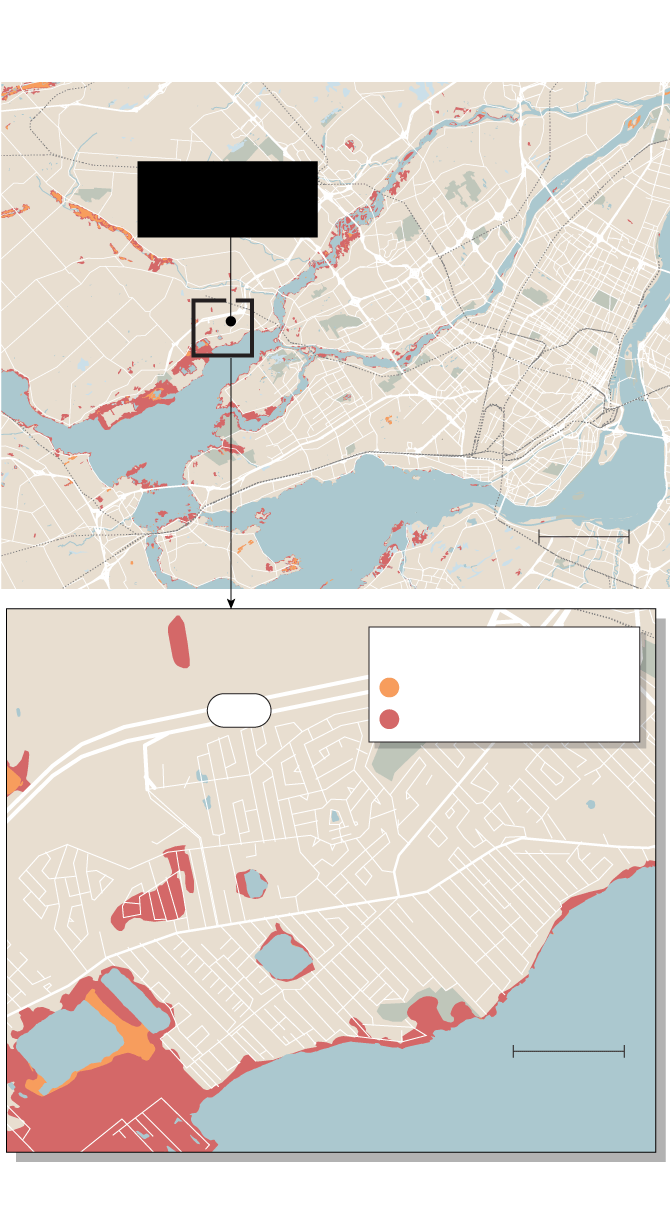 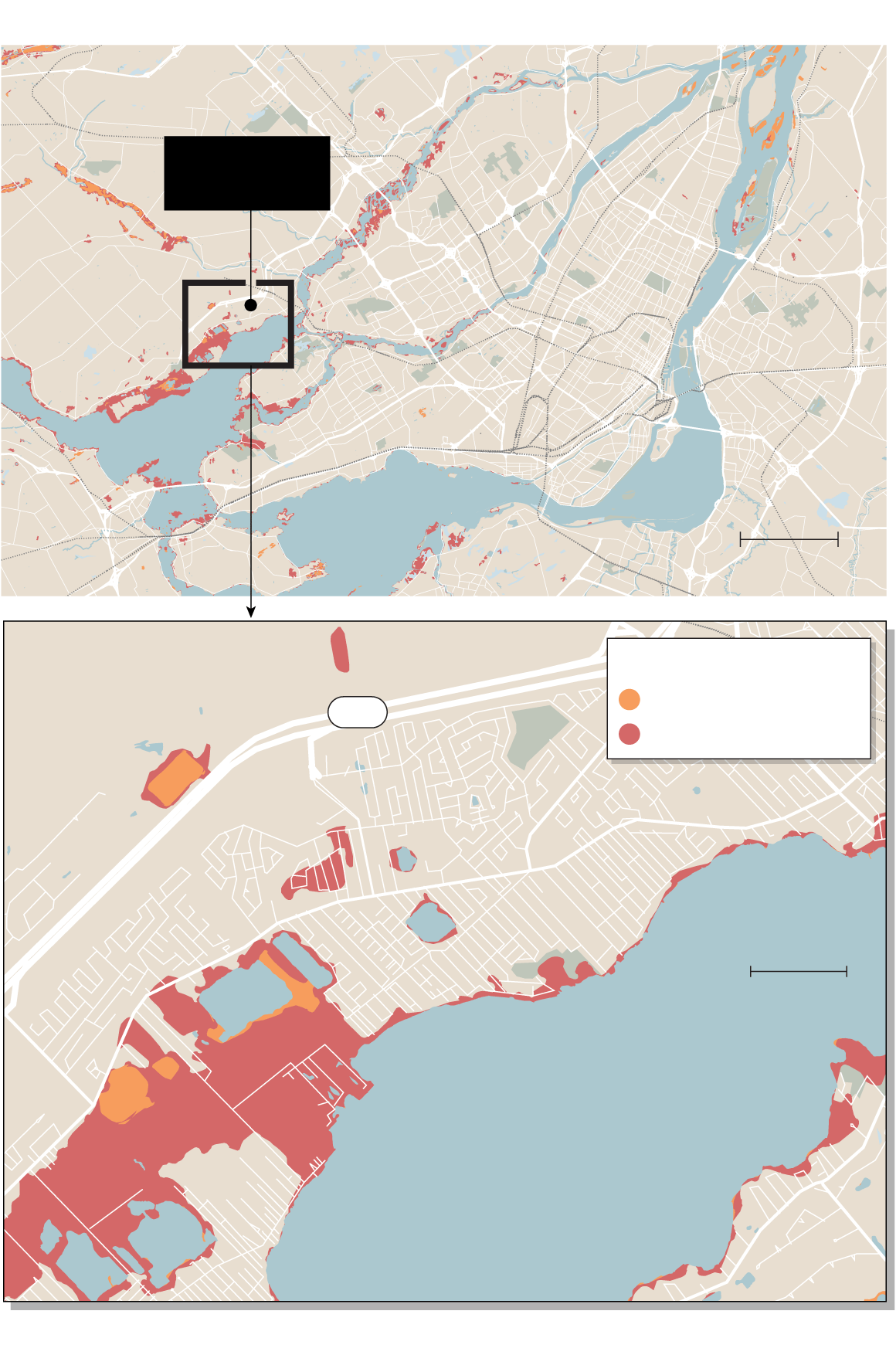 Sainte-Marthe-sur-le-Lac flood levels, as of Saturday

On Monday afternoon, less than 48 hours after the catastrophe, Ms. Nadon stood in bright yellow coveralls amid army vehicles and flashing police sirens, and questioned what was next. She had just been allowed by authorities to pick up some documents in her home, only to find her basement waist-deep in water. The freezer, her winter clothes and about $15,000 worth of her husband’s machinist tools were covered in water.

“It’s a total loss,” Mr. Labelle said of his basement.

The town west of Montreal has produced some of the most dramatic flooding that has swept across Quebec, New Brunswick and part of Ontario. Floodwaters across eastern Canada are expected to crest midweek, but authorities in Quebec warn it could be weeks before lakes and rivers return to their normal levels.

The plight of the evacuees in Sainte-Marthe has turned up vexing questions about the safety of aging infrastructure, and what unstable weather will mean in the future. The dike was built in the 1970s after severe flooding. Now, after catastrophic failure, one third of the town’s residents have been forced from their homes.

“We need a dike worthy of its name,” said Ms. Nadon, a bank auditor. “Was there due diligence about upkeep? How do we ensure it’s solid enough, especially with the floods we’re seeing everywhere?”

The town of 18,000 said late Monday that evacuees in the least affected zones would be able to return to their homes on Tuesday. Others will not be so lucky. Along the perimeter of the flood zone, residents gathered behind orange police tape to watch, helplessly, the floodwaters breach their homes. Mixed among faces of worry were pictures of relief. Alain Dolbec sat in his wheelchair with a shaking cocker spaniel named Mandy on his lap. The dog was one of several rescued by officials from off-limit homes on Monday.

“The material stuff can be replaced. The animals can’t be,” said Mr. Dolbec, who fled with his wife after the evacuation order landed. Two cats and the dog were left behind and Mr. Dolbec was inconsolable. “He’s my baby,” he said as he kissed the pet on the head.

The floods have also led to questions about life near the water. Some see the floods as part of a trend of severe weather events that they believe will become more frequent with climate change.

“It’s the apocalypse,” said Norma Lanteigne, who stood behind police tape a few hundred yards from her flooded home. She abandoned the house with her husband with just enough time to fill a grocery bag with some underwear and toiletries. They slept in the car on Friday and found refuge in a shelter for two nights.

“It scares you,” said Ms. Lanteigne, a retired production-line worker. “It’s going to get worse and worse in the coming years. The planet is warming. Glaciers are melting. It’s the result of negligence. And we ain’t seen nothing yet.”

He said some people had refused to heed the evacuation order, and the military had come across one family that had built barricades around their home, which were holding the waters at bay for now. “We can’t order people to leave,” he said. But he cautioned that residents face potential danger in a flooded home from electricity, which is currently powered off in the flood zone.

The disaster across Quebec has led provincial leaders to underscore the risks of building homes in environmentally sensitive zones.

“There’s no question of allowing new constructions in flood zones. We have to redefine what flood zones are,” Premier François Legault said on Monday. He said part of Sainte-Marthe was built on lower ground, “a little like a swimming pool.” Some people might have to be moved, the Premier said.

Public Security Minister Geneviève Guilbault said that while the most critical phase of flooding in Quebec was over, waters would recede very slowly and authorities would remain vigilant.

For the evacuees in Sainte-Marthe, a town that grew out of a cottage community, all that mattered was a place to sleep, some dry clothes and the hope of a salvageable home to which they could return. Sébastien Côté said the atmosphere around his home on Saturday night was “like a war zone.” Before buying his home a dozen years ago, he’d received assurances it wasn’t in a flood zone. Now, he faced a new, uncertain reality. “It’s a shock,” he said, standing next to police tape with his daughters aged 8 and 11. “I never thought it could happen here.” 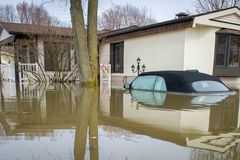 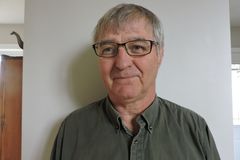