The Ontario government is cutting 400 health sector jobs, adding to hundreds of layoffs – including educators and autism workers – under Premier Doug Ford, despite his promise that not a single person would lose their job.

On Wednesday, the Progressive Conservative government laid off more than 400 people at the province’s local health integration networks (LHINs) and six other agencies as part of a sweeping reorganization of the health-care system.

The layoffs come as Mr. Ford prepares to shuffle his cabinet on Thursday, and the government looks to reset after lagging poll numbers, communications missteps and several instances of the Premier being booed at public events.

“Every doctor and every nurse I talked to said that the LHINs are a disaster,” Mr. Ford told reporters in the Sudbury community of Coniston, Ont. LHINs are regional health-planning authorities that oversee home and community care, and manage waiting lists for long-term care homes.

“I’ll stick with my quote: No front-line person will lose a job. If we see layers and layers of managers making $200,000-300,000, well, they’re at risk. Because I want to put that money towards the front-line, hardworking people.”

Mr. Ford said repeatedly during last year’s election campaign that not a single public-sector job would be lost if his Progressive Conservatives formed government. The Premier has since changed his position to say that no front-line jobs will be eliminated – although recent layoffs have affected workers such as autism therapists. The PC government has said teachers that have been laid off will be rehired by school boards, and autism workers will find employment once more funding becomes available.

Union leaders representing some of the workers laid off on Wednesday warned that front-line staff would struggle to care for patients without enough administrative support to back them up.

The job losses are part of a massive restructuring will see a new superagency, Ontario Health, absorb the duties of six existing agencies and 14 LHINS.

A total of 825 back-office jobs will be eliminated, almost half of which are already vacant. Layoff notices will be going out to 416 workers.

Of those laid off, 265 are spread across the six agencies and 151 are spread across the 14 LHINs, with no more than 30 jobs lost at any one LHIN. According to sources in the government and the affected agencies, 205 positions have been eliminated at Cancer Care Ontario, 82 of which were already vacant. There were 15 layoffs at Health Quality Ontario and 16 at HealthForce Ontario – nearly 25 per cent of that agency’s staff.

In an interview with The Globe and Mail, Health Minister Christine Elliott said the job losses would be limited to back-office functions such as communications, data analytics and payroll. Merging the six agencies and LHINs into a single agency is expected to save $250-million this fiscal year, she added.

The LHINs and some of the agencies have come under intense criticism over the years. Last year, Auditor-General Bonnie Lysyk’s office found that Health Quality Ontario had spent $240-million over seven years, yet had “difficulty assessing and demonstrating its impact on the quality of health care in Ontario.”

On Tuesday, nearly 300 full-time jobs were eliminated at the ErinoakKids Centre for Treatment and Development west of Toronto, after Ontario’s changes to the autism program. The centre says it has posted 178 contract positions, leading to 113 total layoffs, but that those contracts will also end next March, when its government autism funding expires.

The NDP said the government’s changes have already resulted in 175 other job losses at smaller public and private-sector autism treatment centres across the province.

“We’re helping them, and they’re protesting? I don’t know. I question that," he said.

Hundreds of layoff notices have also been issued to Ontario teachers in recent weeks, as the government moves to increase class sizes and switch some courses online. Education Minister Lisa Thompson has repeatedly insisted the notices are not permanent, and that no teacher will voluntarily lose their job. But several school boards say cuts to other funding mean they will have to let teachers go. 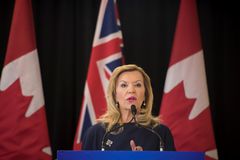 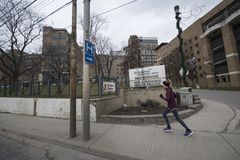 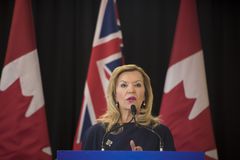 Follow Laura Stone, Kelly Grant and Jeff Gray on Twitter @l_stone @kellygrant1 @jeffreybgray
Report an error Editorial code of conduct
Due to technical reasons, we have temporarily removed commenting from our articles. We hope to have this fixed soon. Thank you for your patience. If you are looking to give feedback on our new site, please send it along to feedback@globeandmail.com. If you want to write a letter to the editor, please forward to letters@globeandmail.com.
Comments