The leaders of two of Ontario’s main political parties trumpeted major campaign promises Wednesday – lower gas prices and subsidized child care – that they said would make life more affordable for average people, but were vague on the details.

Doug Ford promised to cut gas prices by 10 cents a litre if his Progressive Conservatives win next month’s election, saying he’d do so by cutting the provincial gas tax and scrapping the cap-and-trade system. But he wasn’t clear on how he’d replace the billions in revenue that would be lost by taking those actions.

NDP Leader Andrea Horwath, meanwhile, wouldn’t provide details of what families earning more than $40,000 would pay for child care under her plan for the province.

The New Democrats are proposing to fully subsidize public, licensed, not-for-profit child care for those earning less than $40,000 if elected next month, while childcare fees for households earning more than that would be based on ability to pay, with the average cost coming to $12 a day.

But the party has not given details on specific income brackets that may be established or said if there would be any caps.

Horwath was asked several times for those details Wednesday, and would only say that it is a “sliding scale.

“At some point a person’s income is going to be such that they don’t need to have any subsidy or any help with paying for child care,” she said, without elaborating on what point that would be.

Meanwhile, in Oakville, Ont., Ford stood outside a gas station to announce that he would reduce gas prices by 10 cents per litre.

He said he’d do so partly by scrapping the province’s cap-and-trade system, which puts a price on carbon and has added 4.3 cents a litre to the price of gasoline.

Ford said he would also cut the provincial gas tax by 5.7 cents a litre. Currently, drivers pay 14.7 cents per litre of gasoline in provincial tax and 14.3 cents on diesel. The Tories would reduce both taxes to nine cents per litre, which they say would mean drivers pay $1.19-billion less per year.

But that also means that money isn’t going to provincial coffers, along with $2-billion that the province brought in from cap-and-trade last year.

When asked how he would make up for the lost revenue, Ford said, “we can’t afford not to do this.”

Municipalities receive two cents per litre from the provincial gas tax, and that money is earmarked for transit funding. The Liberal government announced last year that they would increase it in 2019 to 2.5 cents a litre, and up to four cents by 2021 – increases the Tories would maintain.

Spokeswoman Drew Davidson said the Liberals are the only party to present a clear and achievable plan for child care. The $2.2-billion program, announced in the party’s spring budget, would provide free child care for preschoolers starting in 2020.

“We decided to publicly fund child care for preschoolers, rather than adopt an income bracket model, because we believe all families in Ontario deserve access to child care. We also relied on expert advice,” Davidson said, citing an economist she said predicted the NDP model would lead to long waiting lists.

“When the NDP released their plan, they failed to explain how they will create enough spaces to fill the demand it would create. Today, Andrea Horwath refused to answer questions about income-testing because she knows it’s going to cost people more – if they can even find a spot.”

A Liberal candidate, meanwhile, zeroed in on Ford’s plan, saying it would lead to massive and harmful cuts.

“Even if any room is created, the gas companies will eat it up with higher prices and we’ll just be left with $1.2-billion in cuts to transit and vital services,” Kathryn McGarry said in a statement.

Andrea Lawlor, an assistant professor of political science at King’s University College at Western University, said Ford and Horwath’s omission of details could be a “multi-pronged strategy.”

“One of the things that it could reflect is the inherent uncertainty of the financial situation that the Liberals will have left” a Tory or NDP government, Lawlor said.

But Lawlor said it’s still relatively early in the campaign and Ford and Horwath are “tossing out these big ideas without solid plans and numbers behind it because it’s not only very attractive, but also they don’t need to set up these promises around numbers just yet.

“I think they’re partly fielding the ideas to see how they land in the public eye,” Lawlor said.

Ontarians head to the polls June 7. 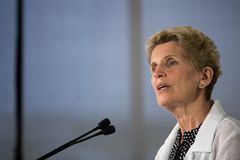 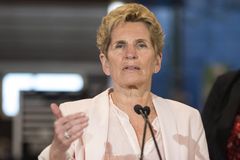 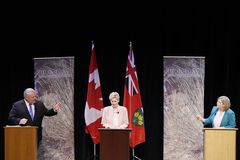