John Crosbie, a former federal cabinet minister who was known as much for his sharp wit as for his politics, has died at the age of 88.

His death early Friday followed a period of declining health that saw an outpouring of support from both politicians and average citizens, particularly in his home province of Newfoundland and Labrador.

His family issued a statement saying they were heartbroken by their loss.

“To Newfoundland and Labrador and to Canada, he was an independent spirit, a passionate nation builder, an orator of biting wit and charm, and always – forever – a tireless fighter for the people,” the statement said.

“He relished the cut and thrust of politics throughout his life, not for sport, but for people, whose best interests he embraced as his own. On the wharf or around a table, he listened, he heard and he resolved to deliver.”

Mr. Crosbie, who was perhaps best known as an outspoken fisheries minister under Prime Minister Brian Mulroney, was born to a political family in pre-Confederation St. John’s in 1931. He was an exemplary student, graduating with honours from Queen’s University in Kingston and Dalhousie Law School in Halifax.

A practising lawyer, he entered politics in 1965 as a city councillor in St. John’s. Within a year, he was appointed to the cabinet of Liberal Premier Joey Smallwood and shortly afterwards was elected to the legislature.

After a dispute with Mr. Smallwood over the leadership of the party in 1969, Crosbie crossed the floor to join the opposition Progressive Conservatives led by Frank Moores. The Conservatives were elected to govern in 1972, and Crosbie held a number of cabinet positions before deciding to run federally in 1976.

As finance minister in the short-lived minority government of Prime Minister Joe Clark, he brought in a tough budget containing tax increases in 1979, and the government fell on a motion of non-confidence after less than nine months in office.

He ran for the party’s leadership in 1983 but, hurt by his inability to speak French, he lost to Brian Mulroney.

Questioned about his unilingualism, Mr. Crosbie shot back, “I cannot talk to the Chinese people in their own language either.”

He riled Mr. Copps again in 1990 during a fundraiser in Victoria, saying Copps made him think of the song lyrics, “Pass the tequila, Sheila, and lie down and love me again.” The sexist quip was caught on camera, sparking an uproar. Mr. Crosbie later acknowledged the comment was “ill-considered.”

He said he and Ms. Copps played up their squabbles for mutual gain. “She’s a professional politician, and I was as well,” he said in 2011. “We’re good pals now. We’re very friendly, and she’s married to a Newfoundlander, so she’s a fine woman as far as I’m concerned.”

During his time in the Mulroney government, he was one of the most vocal proponents of the Canada-U.S. Free Trade Agreement.

Mr. Crosbie’s final cabinet post was as fisheries minister, and he oversaw the closing of the cod fishery in Atlantic Canada – a move that put thousands of people in his home province out of work.

Defending himself in front of protesting Newfoundland fishermen in 1992, shortly before he announced the fishing moratorium, Mr. Crosbie said, ”I didn’t take the fish from the God-damned water!“ He would later describe the moratorium as the most difficult moment of this life in politics. However, when he left the political arena he earned praise for the compensation the government offered to those thrown out of work.

Marjory LeBreton, a former Conservative senator and long-time party insider, said Mr. Crosbie was ahead of his time with his ill-fated 1979 austerity budget. She also hailed his tough stand in the face of the cod crisis.

“He is revered in the Conservative party for his intelligence, his courage and for his incredible wit,” she said. “We could fill a book with Mr. Crosbie-isms, some of which would not pass the ‘political correctness’ restrictions we currently live with.”

Mr. Crosbie was made an officer of the Order of Canada in 1998, and he went on to serve five years as lieutenant-governor of Newfoundland and Labrador. On his first day as viceregal representative in 2008, Mr. Crosbie said he had no regrets about his straight-shooting style.

“I have never hesitated to offer my opinions from time to time, verbally or in writing, on the public issues of the day,” he said. “What’s the point of being around if you don’t give your opinions, whether anybody wants to hear them or not? I never gave a darn if they wanted to hear them or not, I’ll tell you that.”

Mr. Crosbie leaves his wife Jane, and children Michael, Beth and Ches, who is leader of Newfoundland and Labrador’s Progressive Conservative party.

The family’s statement said Jane Crosbie had lost the love of her life.

“To us as kids, grandkids, and great-grandkids, he was simply dad, granddad, great-granddad – our bedrock of support,” the family said.

Mr. Mulroney issued a statement praising Mr. Crosbie as “one of the giants of our generation,” saying he would be remembered for his courage, humour and passion.

“He was one of the most valuable public servants for Canada and his province during our challenging debates over resources and our Constitution,” Mr. Mulroney said.

Newfoundland and Labrador Premier Dwight Ball described Mr. Crosbie as a tireless advocate for the province.

“Mr. Crosbie was a spirited and proud Newfoundlander and Labradorian,” Mr. Ball said in a statement. “Known for his colourful personality, he ensured that the interests of Newfoundland and Labrador were heard loudly and clearly over the course of his storied career.

John Crosbie remembered as a Conservative cabinet minister with a sense of humour
January 10, 2020 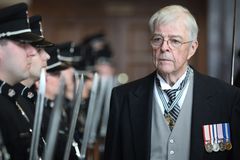 Ches Crosbie, son of John Crosbie, making run for Newfoundland Tory leadership
February 15, 2017
Report an error
Due to technical reasons, we have temporarily removed commenting from our articles. We hope to have this fixed soon. Thank you for your patience. If you are looking to give feedback on our new site, please send it along to feedback@globeandmail.com. If you want to write a letter to the editor, please forward to letters@globeandmail.com.
Comments