A former executive with British Columbia’s lottery corporation became emotional Tuesday after two days of testimony at a public inquiry into money laundering.

Robert Kroeker took several moments to compose himself but his voice still cracked with emotion when he was asked to describe his experience as a focal point in B.C.’s probe into money laundering.

Kroeker, who was fired as vice-president of corporate compliance in 2019, spent much of his testimony explaining what the Crown corporation knew about illegal cash circulating at casinos and what was being done to prevent it.

“You are not a floor manager. You are not on the business side of casinos. You are not wining and dining high rollers,” said Marie Henein, Kroeker’s lawyer. “That’s not what you do. You’ve spent your life in compliance and trying to deal with money laundering and making casinos secure places in B.C.”

Kroeker’s voice cracked as he tried to describe the impact of allegations that the lottery corporation did not act on large amounts of illegal cash at casinos.

“It’s been devastating, not being able to respond, particularly when I was at the corporation, and especially for my team,” said the former RCMP officer. “They’re professionals and to see them continually attacked and maligned, it’s really unfair.”

Former gaming investigator Larry Vander Graaf, who is also a former Mountie, told the commission last November that the B.C. Lottery Corp. did not move quickly enough to protect the integrity of gaming from organized crime more than a decade ago.

Vander Graaf, the former executive director of the province’s gaming policy branch, testified that large amounts of suspicious cash started to appear at B.C. casinos in 2007 and by 2010, loan sharks were circulating nearby parking lots with bags of money believed to be from proceeds of crime.

Kroeker testified Tuesday he received a high-level briefing about suspicious cash activities at provincial casinos with possible links to organized crime on his first day on the job at the lottery corporation in 2015.

He said he reviewed a document that concluded lottery officials appeared unwilling to address police concerns about suspicious cash and its potential connections to organized crime. The document also included the lottery corporation’s concerns over the potential fallout if the information became public, he added.

“Certainly by this point BCLC knew there was a concern around the cash being brought into casinos being proceeds of crime,” B.C. government lawyer Jacqueline Hughes asked Kroeker.

“Yes, for sure,” said Kroeker.

On Monday, Kroeker testified that Attorney General David Eby appeared uninterested in the lottery corporation’s anti-money laundering efforts during a meeting in 2017 shortly after the New Democrats took power.

The Ministry of Attorney General said in a statement on Monday that Eby would not comment on evidence or proceedings while the commission is under way.

But in a statement on Tuesday, the ministry said “this government’s actions to tackle financial crime in B.C. speaks for itself.”

Kroeker testified Tuesday that the money laundering issue in B.C. had become “politically charged” and was used by the two main political parties to criticize each other. 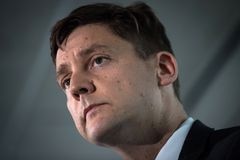