Each day the train rolls into Lac-Mégantic serves as a stark reminder to former mayor Colette Roy Laroche of the fatal derailment that struck five years ago.

“The whistling of the train reminds us of the tragedy,” says Roy Laroche, who became the face of the community in the aftermath of the disaster in which 47 people were killed.

On July 6, 2013, a runaway train hauling tanker cars loaded with volatile crude oil broke loose and barrelled into the town of 6,000 in the wee hours before derailing and exploding.

Besides the deaths, a large swath of the downtown was decimated, leaving Lac-Mégantic residents shattered.

Roy Laroche, who stepped down as mayor in 2015, is emotional as she recalls the infinite sadness of so many lost lives but also the soothing images of human solidarity and people coming together in the face of unfathomable pain.

“They are painful memories, especially when you think about that first night, the first day,” she told The Canadian Press on Thursday. “But the images that are the most important for me are those of humanity, the image of citizens taking charge.”

Roy Laroche would become a beacon for the Lac-Mégantic community and a familiar face across the country, earning her the nickname “Granite Lady” for her cool demeanour in the face of the devastation.

“I discovered that I had unsuspected strength because, in retrospect, when I look back and analyze what happened, like many others I often ask myself the question: ‘How did I make it through?,“’ she said.

It would only be after leaving public office that Roy Laroche felt the full brunt of the tragedy.

During her time in office following the disaster, she didn’t give herself the time to worry about herself. But the emotion hit home after her husband passed away shortly before her political retirement.

“When I found myself alone at home, it was then, with a bit of calm and with time, that I experienced the pain and suffering that others experienced as the tragedy unfolded,” she said.

“If I told you the first year after I quit was easy, I would be lying,” she said. “Everything I had buried came back to the surface.”

From tragedy has come important lessons that Roy Laroche takes to heart, deepening her humanity and teaching her to be a better person.

“I’m even more sensitive to people’s needs, especially in times of grief and illness,” she said. “I take a deeper look at people who may be struggling.”

Five years after the tragedy, the legal challenges stemming from the disaster continue. In September 2019, a civil suit brought by various groups against CP Rail is expected to heard.

In May, Quebec and Ottawa jointly agreed to fund a 12.8-kilometre bypass that will take rail traffic away from the downtown area, hopefully by 2022.

As the years pass, the former mayor sometimes likes to imagine it was all a dream.

“It’s as if such a disaster couldn’t have happened, it’s beyond anything you can imagine,” she said.

But the memories of that horrific night in 2013 remind her it was all too real.

“Those images of fire, flames, mushroom clouds, the sounds … the sky was so clear, there was so much light, you would have thought it was broad daylight,” she said.

Several events were planned to mark the anniversary, including a march on Thursday evening and a commemorative mass and ringing of the bells Friday. 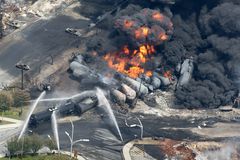 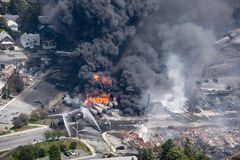 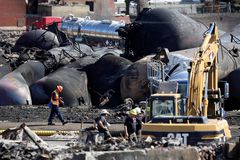