Ontario’s new law that gives the provincial government immunity from many lawsuits is being challenged as unconstitutional in the courts.

The law – the first of its kind in Canada since suing governments became possible decades ago – took effect July 1. It bars lawsuits that allege negligence against provincial government officials and agencies, and puts procedural hurdles in the way of lawsuits alleging corrupt acts or abuse of office.

It could affect lawsuits involving everything from tainted-water scandals such as the one in Walkerton, Ont., two decades ago, to negligent police investigations in wrongful convictions, says lawyer Julian Falconer.

He is bringing the legal challenge on behalf of Brad Blair, a former Ontario Provincial Police commander who was passed over for the force’s top position last year in favour of a friend of the Premier’s.

Mr. Blair, who was later terminated from the OPP, has launched several legal actions related to the hiring process as well as his firing. His latest action, filed in Ontario Superior Court this month, argues that the Constitution safeguards everyone’s right to seek justice in the courts for alleged wrongs committed against them.

In an interview, Mr. Falconer called the new Ontario law “a shameless exercise in public officials trying to duck accountability at every level.”

Under the Crown Liability and Proceedings Act, lawsuits alleging government negligence are barred, and those alleging intentional misconduct by government officials need prior permission from judges to go ahead. Claimants are obliged to present evidence at the outset of their claims that their cases can succeed – before they are allowed access to any government documents or testimony from government witnesses.

Mr. Falconer called that part “the most extreme” aspect of the legislation. “You could have corrupt officials, officials engaged in abuses of power, doing it on purpose, and the private citizen has to subject themselves to this Kafkaesque exercise of being cross-examined on their case before the case even starts.” He says that would allow the government “to use the public purse to drain the person [of funds].”

Ontario Premier Doug Ford has said the law is designed to prevent “frivolous nonsense in the courts.”

On Wednesday, a government spokeswoman said that the new act will not “block” any claims against officials who abuse their power. “The claimant must show that the proceeding is being brought in good faith and there is a reasonable possibility that the proceeding would be resolved in the claimant’s favour,” said Jenessa Crognali, the press secretary for Attorney-General Doug Downey.

In September, Mr. Blair announced he would be pursuing a multimillion-dollar wrongful-dismissal claim against Mr. Ford and top Ontario officials. The lawsuit is now on pause, because his latest legal action essentially asks a judge to first clear the barriers imposed by the Crown Liability and Proceedings Act.

“This isn’t just about me. It’s about anyone in the province of Ontario who may be harmed by the government and is unable to hold them accountable,” Mr. Blair said in an interview.

The law has been widely criticized in Ontario’s legal community.

Toronto lawyer Earl Cherniak said it is difficult enough to sue the Crown, but this legislation has made it virtually impossible: “When the government does the kind of things that, when you or I do them, someone can sue us, why shouldn’t they be liable?”

Erika Chamberlain, the dean of the University of Western Ontario’s faculty of law, said the new act reverses a decades-long trend in which government officials were exposed to increasing degrees of court scrutiny. She worries that other jurisdictions might be tempted to follow Ontario’s lead.

“Every province has some kind of Crown liability legislation that typically spells out when you can sue the government,” Ms. Chamberlain said. “I would say that has expanded for the last 60 to 70 years, for the most part, but now Ontario is the first one I’m aware of that is really starting to curtail lawsuits against the government.”

When the act was introduced in the spring, a former Liberal attorney-general appeared at a legislative finance committee to ask why these provisions were being shoehorned into a budget bill. Michael Bryant, who now heads of the Canadian Civil Liberties Association, called the act “a draconian abuse of power.”

Mr. Falconer said his client’s case is the first constitutional challenge of the new law and that he will pursue it to the Supreme Court if necessary.

Controversy over his friendship with Mr. Ford led Mr. Taverner to withdraw, and Ontario’s Integrity Commissioner has since characterized that hiring process as “flawed” and “troubling.”

The reason given to Mr. Blair for his firing in March was that he had violated his confidentially oath by filing sensitive internal OPP e-mails as part of legal actions.

"My personal goal is to be reinstated,” said Mr. Blair, who denies wrongdoing. He added that “I want to be able to walk out the door on my own terms, hold my head high and get on with my life.” 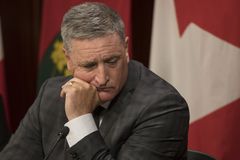 Follow Colin Freeze and Sean Fine on Twitter @colinfreeze @seanfineglobe
Report an error Editorial code of conduct
Due to technical reasons, we have temporarily removed commenting from our articles. We hope to have this fixed soon. Thank you for your patience. If you are looking to give feedback on our new site, please send it along to feedback@globeandmail.com. If you want to write a letter to the editor, please forward to letters@globeandmail.com.
Comments