Former RCMP commissioner Bob Paulson says there are “reasonable concerns” about the appointment of Premier Doug Ford’s family friend, Ron Taverner, as the next commissioner of the Ontario Provincial Police and there should be an independent inquiry into the matter to preserve the integrity of the force.

Mr. Paulson, a 32-year veteran of the RCMP until his retirement in June, 2017, is joining the chorus of calls for a third-party investigation into Toronto Police Superintendent Taverner’s appointment, which is set to take effect on Monday.

“I think there should be a third-party investigation as to how this worked. And people should answer questions,” Mr. Paulson said in an interview with The Globe and Mail on Thursday.

“What you need here is someone with complete integrity and confidence to be able to go in and review the whole process, all of the outstanding issues, and report publicly to say, ‘No, no, you’ve got it all wrong, this is a good guy, he’s the guy.’ Or, ‘This stinks and ought not to have ever happened.’”

Mr. Paulson said there are still lingering questions about the hiring process that led to Supt. Taverner’s appointment, including why qualifications were lowered two days after the job was initially posted.

“The questions that have been raised are reasonable questions and they need time to be sorted out, because it sounds as though there are some reasonable concerns,” he said.

“It’s too risky to have the OPP’s independence impugned.”

“If there is a long-standing personal relationship between the new commissioner and the Premier, that needs to be fully understood and fully explored before he’s appointed,” Mr. Paulson said.

If Supt. Taverner’s appointment goes ahead on Monday, it could result in a loss of public confidence in the OPP, Mr. Paulson said.

“If that is lost because people doubt the independence, then the whole thing is a sham – and it’s no good,” he said. “That sense of integrity of the institution has to be preserved.”

Mr. Ford’s office declined to comment on Mr. Paulson’s remarks, pointing to a previous statement from Community Safety Minister Sylvia Jones in which she said the government stands by its hiring process. She also said the government would respect any decision made by the Ombudsman about an inquiry and would co-operate with a review.

The nine-page letter from Deputy Commissioner Blair also alleges that recent interactions between Mr. Ford's office and the provincial police force "add to the concern about maintaining the independence and integrity of the OPP, free from undue political influence."

NDP Leader Andrea Horwath said she will be asking the RCMP to look into allegations that Mr. Ford’s chief of staff, Dean French, requested that the OPP purchase a “large camper type vehicle” and have it modified to specifications from the Premier’s office and keep the costs “off the books.”

Mr. Paulson said it’s not unreasonable for the Premier’s office to weigh in on how the Premier will be protected and supported by the OPP.

“The suggestion that things be kept off the books is another … concern. That’s very concerning,” he said.

“If there’s allegations of criminality, supported by some substantial evidence, then that’s a whole other question and that needs to be reviewed. And that would require, I think, a separate force to do that.” 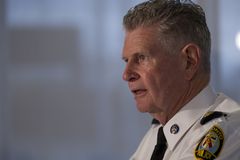