An Ontario judge has sided with a group of former students who sued a Christian boarding school over abuse they suffered decades ago, finding the institution’s leaders used their “absolute” power to torment pupils.

The now-defunct Grenville Christian College “engaged in systemic negligence” from the early 1970s to the late 1990s and will have to pay yet-to-be-determined damages to the former students, Justice Janet Leiper ruled Thursday.

“The headmasters were the absolute masters of the Grenville domain, indulging in acts of petty cruelty and doling out disproportionate physical and emotional pain to vulnerable or less-favoured students,” she wrote, noting the late J. Alastair Haig and Charles Farnsworth were accountable to neither a board nor a written policy.

The school in Brockville, Ont., advertised itself as an Anglican institution, and had ties to an authoritarian American sect called the Community of Jesus.

Leiper’s decision said the school worked to “mould” students using the teachings of the sect, adding it also hid its most hard-line practices from patrons and parents while failing to keep records of its most extreme disciplinary measures.

“It required the appearance of happiness, enforced by strict discipline,” Leiper wrote of the school.

She found class members – residential students who attended the school between 1973 and 1997 – were either harmed or put in harm’s way because of the negligence and abuse.

“The hidden cost for many students came in the form of lack of privacy, physical and emotional stability, autonomy and well-being,” Leiper wrote.

The students testified they were cut off from communicating with their families, kept under constant surveillance and subjected to “exorcisms” and so-called “light sessions,” in which they were forced to confess real or imagined sins in front of staff and peers.

Leiper’s decision said one of the two headmasters was privy to details of female students’ sexual experience. Such knowledge, as well as the contents of the “light sessions,” often fuelled gender-based taunts and criticisms.

“There was active ‘policing’ of girls’ bodies, mannerisms and clothing,” she wrote. “Girls could be chastised for swaying as they walked, or for crossing their legs and risking their slips becoming visible to boys. Clothing inspections could be accompanied by negative messages about the female form or sexuality.”

Students were also forced to spy on one another and snitch on those they caught sinning, court heard.

Some said they were beaten with wooden paddles to the point of injury. Another accused one of the headmasters of touching him sexually.

Leiper rejected the defence’s claims that the plaintiff’s witnesses shouldn’t be believed, saying she found them credible.

She also rejected arguments that the corporal punishment was standard at the time, pointing to evidence that the institution was using such methods years and decades after a provincial report known as “Hall-Dennis” said it should be abolished in schools.

Loretta Merritt, who represented the plaintiffs, said the ruling marks more than just a legal victory.

“It’s incredibly validating for the witnesses who gave evidence,” she said. “They now have a judge who believes that what they said happened was true. A judge who found that that conduct by the school fell below the standard of care.”

The case has been referred back to the case management judge to figure out damages.

Defence lawyer Geoff Adair said his clients are considering an appeal but will decide on it “in due course.” Adair, who represents the school as well as the estates of the two deceased headmasters, declined further comment. 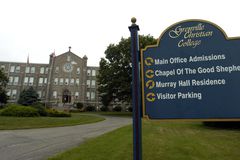