Winnipeg police say they have charged a former University of Manitoba professor with sexual assault.

Officers say a female student, who was 19 at the time, was allegedly sexually assaulted several times by her jazz professor between September 2014 and January 2017.

Police say Steven Kirby, who is 62, was arrested in May.

Const. Tammy Skrabek says the case has been before the courts six times in recent months following an investigation that began last year.

“Investigators were satisfied there was no immediate danger to any other people at the time so we felt safe in doing so,” she said Tuesday.

Skrabek said Kirby turned himself into police at the time of his arrest and is co-operating with investigators.

News of the charge comes after university president David Barnard issued an apology last week to students who have experienced assaults or harassment on campus.

The university says there are currently five investigations at the institution into alleged sexual assaults and harassment, all involving faculty members.

“Incidents of inappropriate behaviour at this university have been reported and investigated over the last few years. Inappropriate behaviour, including sexual harassment and sexual assault on campus is unacceptable, and, quite honestly, I find such conduct to be horrible and appalling,” Barnard said in a statement.

“I am apologizing to students who have experienced such inappropriate behaviour. I am deeply sorry. My promise to you is that we will do everything possible to shape a safe and healthy environment, and we will deal expeditiously with all violations that are reported.”

Barnard also said he discovered that the university issued a letter of employment to Kirby after he left his job in Winnipeg.

“The document provided to Steve Kirby as a letter of employment – that I understood to be a mere chronology of his time at the university – in fact also included an outline of activities and achievements, that, though factual, could be construed as supportive. The inclusion of this material was a mistake that must not be repeated,” he said.

“The letter in no way recommended him for any position. Anywhere.” 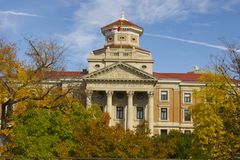