New Brunswick’s Tory leader says a four-year agreement with one of the smaller political parties would help create stability in a province stuck with a deadlocked result from last week’s election.

The Tories, led by Blaine Higgs, won 22 seats in the legislature – one more than the Liberals. Neither party has enough seats for a majority. However, Liberal Premier Brian Gallant has said he intends to continue governing as both leaders try to gain support from the third parties holding the balance of power.

On Monday, Higgs met with the Green Leader David Coon and emerged to say the parties share some common policy areas, such as improving the openness of government.

He also said the Greens are interested in a four-year agreement like the one in British Columbia between the NDP and the Green party, which states the agreement is in effect “until the next fixed-date election.”

Though the B.C. agreement doesn’t guarantee the support of the Greens, it sets out a series of guidelines on how the two parties will work together, and it requires the minority government to hold a referendum on proportional representation.

Higgs said the document is “maybe more thorough” than something his party would sign, but added he’ll see where talks go with the Green leader.

Coon issued a brief statement Monday, saying the “ongoing discussions” with Higgs and Gallant will continue this week.

“Both agreed with me that we need to find a way to bring a stable government for the people of New Brunswick in this minority government situation,” Coon’s statement said. “I and my caucus will continue to work to achieve this.”

The right-of-centre People’s Alliance and the Green party scooped up three seats apiece on Sept. 24.

The People’s Alliance has already said it would help prop up a minority Tory government for up to 18 months, even though a formal deal or coalition has not been struck.

As for the Greens, they have yet to make any commitments, official or otherwise.

Higgs told reporters that he likes the idea of the longer-term agreement being floated by the Greens, and he said it was something People’s Alliance Leader Kris Austin might consider as well.

“We’re using the template that was struck out West … maybe it’s more thorough than something we need to have,” Higgs said after his meeting with Coon.

“Ideally, that agreement is a four-year document. And I think if we can find a four-year commitment, and I think Mr. Austin would also be open to that, because we want stability here in the province, and that’s what we’re striving for.”

Higgs also said it’s important for the province’s financial stability to work out a longer-term arrangement that will ensure bond raters don’t downgrade the province’s credit rating due to political uncertainty.

“If they think we’re going into an election, that’s just one more item bond raters look at … and then we’re deeper in the hole,” he said.

Austin said in a telephone interview that while his party also wishes to create stability in government, “at the same time we want to have our autonomy as a party to continue to fight for things we’ve been fighting for all along.”

He said he is hesitant to say he’d favour a four-year agreement without looking into the possibility in greater detail.

Higgs was recently downplaying his party’s relationship with the People’s Alliance, describing it as an informal, verbal agreement.

However, Austin said that he will expect talks with a Progressive Conservative government prior to offering support on the throne speech and financial bills.

“I would expect to have some kind of discussions or negotiations leading into it,” he said.

On Friday, Gallant said he would try to form a minority government with the Green Party and will recall the legislature for a throne speech by Oct. 23.

Gallant said the Liberals will not form a coalition with the People’s Alliance, saying there are “fundamental values” the Liberals don’t share with the smaller party, particularly their language policies. 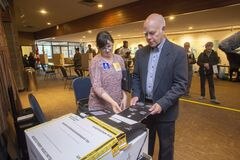 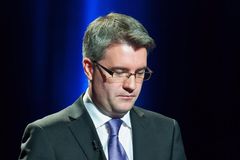 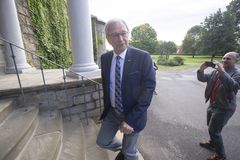