Ontario and British Columbia have identified cases of a highly contagious variant of the coronavirus, first detected in Britain, prompting calls for stronger border enforcement and for provinces to move faster administering vaccines.

Public-health officials say four cases of the variant, found in B.C., Ottawa and the Durham Region, are all connected to travellers from Britain. In Durham, east of Toronto, officials first reported two cases there that were linked to community spread, but the couple later told health officials they had been in contact with someone who had travelled.

The variant, which scientists believe is as much as 70-per-cent more transmissible, has been detected in several other countries, including Denmark, Belgium, Australia and the Netherlands. In an effort to contain the spread, Canada has a travel ban on all flights arriving from Britain until Jan. 6.

The new cases were announced as Ontario went into a lockdown in a bid to lower case counts – the province has reported more than 2,000 daily new cases for 13 straight days. Other provinces have also closed non-essential businesses and urged people to not gather or travel over the holidays.

The variant shows the need for more restrictions on non-essential travel and stricter quarantine rules for people entering the country, said Andrew Morris, who works in infectious diseases at Toronto’s Mount Sinai Hospital.

“I think what this [variant] speaks to is how badly we’ve done at controlling, you know, regional, interprovincial and international importation of cases,” Dr. Morris said Sunday.

“You cannot go into a store in Toronto or, you know, Barrie for shopping because it’s considered non-essential, but you can actually do it in Florida and then you can come back and then you’re just asked to not gather with anyone else, right? To me that makes absolutely zero sense.”

At the same time as health officials worry about the potential of the variant to rapidly spread in Canada, data show that the biggest provinces have been slow to administer COVID-19 vaccines. Ontario, for example, has only administered 13 per cent of the doses it has received. That pace concerned three physicians who spoke with The Globe and Mail on Sunday.

Health authorities need to get the vaccines to high risk people “as quickly as we can,” said Mount Sinai Hospital microbiologist Allison McGeer, who is also part of Canada’s COVID-19 immunity task force. “We’re not living in an ideal world but, in an ideal world, the target is every vaccine dose in the country should be in somebody’s arm in a week.”

Ontario and Alberta were the only provincial governments that provided complete data to The Globe on their vaccine programs Sunday. Ontario said it has administered 11,241 shots of the 90,000 doses it has received. A spokesperson said vaccinations were not given on Christmas or Boxing Day in Ontario. In Alberta, vaccinations were administered every day but Dec. 25. The Prairie province only provided data as of Dec. 24. At that time, 4,711 of its 29,250 doses had been administered.

Data gathered by Ryan Imgrund, a biostatistician who consults with public-health agencies in Ontario, show that the most-populous province has the lowest per capita vaccination rate. Mr. Imgrund said the numbers breakdown to 76 people per 100,000 getting their shots in Ontario and 106 per 100,000 in Alberta. Both provinces are well behind Prince Edward Island, which has inoculated 939 people per 100,000, according to Mr. Imgrund’s data.

Alexandra Hilkene, a spokesperson for Ontario Health Minister Christine Elliott, tied the lower vaccination rate to staffing. “Schedules for vaccination clinics were adjusted over the holidays to ensure that there was no impact on staffing levels,” she said.

Dr. Morris said vaccine strategy is the latest example of Ontario’s halting response to the pandemic.

“They should absolutely be administering them faster,” he said. “Almost every step of the way, we haven’t been [acting] with the urgency that the response requires, that’s my belief, and we’ve seen this repeatedly. So, in Ontario, we had a delay of lockdown for five days until Boxing Day, and that kind of urgency is reflected on, similarly, how many vaccines have been administered so far.”

Canada has approved vaccines from Pfizer-BioNTech and Moderna. The federal government is expecting to receive a total of six million doses of the two vaccines by the end of March. The vaccines are distributed to the provinces and territories to administer on a per-capita basis.

The federal government has been under increased pressure from Ontario and Quebec to bolster its border measures and quarantine enforcement. That demand was underscored by the discovery of the four travel-related cases this weekend.

“The province continues to call on the federal government to urgently partner with Ontario to implement testing at Toronto Pearson International Airport,” read a statement from the provincial government.

In a statement from the federal public-health agency, spokesperson Eric Morrissette did not say whether Ottawa will move ahead with that request. Data show less than 2 per cent of COVID-19 cases in Canada are linked to international travel.

If the federal government does not implement new testing protocols, Ontario said it will do so on its own.

The province’s calls for testing were echoed by Dr. Morris and infectious-diseases expert Zain Chagla, with McMaster University. Dr. Chagla said that travellers should be tested before their trip, on arrival and then a week later, which would allow the full sequestration of those at risk of transmitting the virus.

A 14-day quarantine for everyone has proved difficult to enforce and hard for people to live up to, Dr. Chagla said, pointing to the situation in Durham as an example of people not strictly following the rules.

The person probably arrived in Canada with COVID-19 and it’s likely that if they properly followed the quarantine rules, the cases in Durham “would have been prevented,” he said. “You really have to quarantine properly to make it work.”

Local public-health officials said they are still investigating the Durham case and declined to say whether the individual followed the quarantine rules. “This is also an important reminder about the need for arriving international travellers to maintain quarantine for 14 days,” Barbara Yaffe, Ontario’s Associate Chief Medical Officer of Health, said in a statement Sunday.

Federal quarantine rules require international travellers to have no contact with anyone for two weeks upon their arrival in Canada. Mr. Morrissette said the federal public-health agency works with the RCMP and local authorities to ensure compliance with the Quarantine Act.

He said the agency is investigating the case in Durham, “in light of new information that the two individuals have been in contact with a recent traveller from the U.K.”

However, Dr. McGeer said that the virus variant could have been passed on even if everyone involved had been following the rules. “Quarantine is never 100-per-cent effective,” she said. 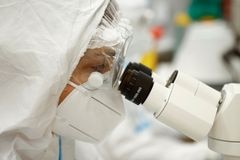 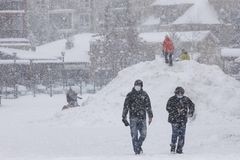 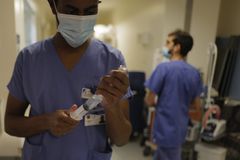 Follow Marieke Walsh and Oliver Moore on Twitter @mariekewalsh @moore_oliver
Report an error Editorial code of conduct
Due to technical reasons, we have temporarily removed commenting from our articles. We hope to have this fixed soon. Thank you for your patience. If you are looking to give feedback on our new site, please send it along to feedback@globeandmail.com. If you want to write a letter to the editor, please forward to letters@globeandmail.com.
Comments