Premier François Legault pushed the concept of “herd immunity” on Thursday as he prepared to lay the groundwork next week for a plan to gradually restart the economy and get children back to schools.

The approach would involve exposing a large proportion of Quebecers to the novel coronavirus in a measured, gradual way, to help them develop a natural immunity.

The idea of reopening schools has garnered an unfavourable response among some parents, teachers and unions, who worry about kids returning to class just weeks after physical distancing and stay-at-home measures were enacted to slow the spread of COVID-19.

But Mr. Legault argued Thursday that less than 10 per cent of the province is currently naturally immune to COVID-19 – perhaps a bit more in hard-hit Montreal – and that number won’t change unless the province starts resuming certain activities.

“The idea is to go very gradually so that people who are less at risk can develop antibodies to be able to become immune,” Mr. Legault said.

Mr. Legault stressed that the situation in long-term care homes – which accounted for 93 of the additional deaths Thursday – is much different than the rest of the province, which has had more stable figures.

In the province, 97 per cent of COVID-19 deaths are among people 60 and older. Public health officials have said children are very low-risk and tend not to develop severe symptoms from COVID-19, so letting them get the virus and gain immunity would have an impact on the rest of the province’s population.

Health experts have questioned the strategy, saying there are larger ethical questions that need to be considered.

Alison Thompson, a professor at University of Toronto’s faculty of pharmacy, said letting children be exposed in schools to COVID-19 is a far cry from a mandatory vaccination program.

“It’s not just a matter of building immunity – they have to get sick first,” she said in a recent interview, calling the proposal a “sickness strategy.”

Mr. Legault has revealed little about the province’s plan, but said parents won’t be obliged to send their kids to school. He also repeated Thursday that a go-slow approach is better.

“Because, unfortunately, we don’t expect to have a solution (to the outbreak) in September,” Mr. Legault said. “So, we’ll eventually have kids return to school and it’s better to go gradually than to send them all at the same time.”

Staying home was a necessary measure to see how the virus would behave and maintain flexibility to treat people in hospitals, said Horacio Arruda, the province’s director of public health. Now, he said, it’ll be about a gradual resumption of activities – accompanied with testing.

“There is a question of collective immunity that we hope to achieve, but there is also the functioning of society and the perverse effects of being confined for a long time,” Mr. Arruda said.

Mr. Legault also implored many health-care workers currently on the sidelines to report back to work.

Quebec reports 9,500 health-care workers are missing – 4,000 are recovering or infected with novel coronavirus while 5,500 simply haven’t returned to the job.

“We need you,” Mr. Legault said, reassuring them they would have the protective equipment they need. “The network cannot function with 9,500 people absent.”

A patients’ rights group has filed a human rights complaint on behalf of long-term care residents in Quebec.

The Quebec Council for the Protection of Patients’ complaint describes alleged discrimination and exploitation of those who live or have lived in long-term care or seniors homes since the beginning of the COVID-19 crisis and seeks financial compensation from the Quebec tribunal.

The province’s seniors homes have been the epicentre of the fight against the novel coronavirus, accounting for nearly 80 per cent of deaths – something the council argues the province should have known given what had happened elsewhere.

Mr. Legault said the province acted when it realized the situation.

With files from Giuseppe Valiante 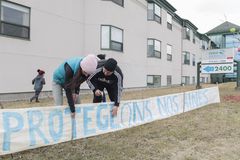 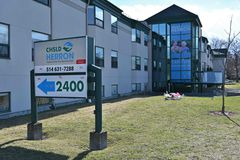 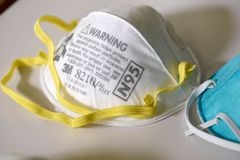