François Legault, the premier-designate of Quebec, says he will invoke the notwithstanding clause to work around the Charter of Rights and Freedoms so that his government can ban people in positions of authority in the province from wearing religious symbols.

The Coalition Avenir Québec (CAQ) Leader said on Tuesday the plan would prevent public servants, including teachers, police officers and judges, from wearing religious garments such as the Muslim hijab and Jewish kippa while performing their public functions. He would also amend Quebec’s charter of rights to impose the ban, which is long-standing party policy, but barely came up on the campaign trail.

It is the second time in a month that a provincial leader has announced his intention to invoke the rarely used clause to override court rulings. Ontario Premier Doug Ford had planned to use the power to pass legislation that would cut the size of Toronto city council weeks before a civic election, but an appeal court stayed a ruling that the bill was unconstitutional.

The religious symbols ban is part of a package of policies meant to protect Quebec’s francophone identity, and includes a cut in immigration quotas and language and values tests for new arrivals. Failing the tests would result in expulsion, but only if Mr. Legault can get the federal government to go along.

In his first news conference since his party was elected to government on Monday night, Mr. Legault justified the move to override any successful court challenge and the Canadian Charter’s protection of religious freedom. He said his government will have a transition period in which people who want to continue wearing religious symbols will be offered alternative jobs.

The CAQ won a majority government, sending the incumbent Quebec Liberal Party under Philippe Couillard and the Parti Québécois to crushing defeats. PQ Leader Jean-François Lisée announced his resignation on Monday night. Mr. Couillard said he would take a few days to consider his next step.

Mr. Legault avoided getting into detail on most issues during the 35-minute news conference. He said his priorities remain putting money back into the pockets of Quebeckers and improving the health and education systems.

Mr. Legault was peppered with questions about his plans, and indicated he will take a go-slow approach on many. Promises to introduce junior kindergarten, to cut specialists' salaries and to cut taxes and fees and increase child benefits will be subject to study and deliberation. He was more resolute on the religious-garment ban and his plan to cut immigration to the province by 20 per cent in 2019.

He said he spoke to Prime Minister Justin Trudeau on Monday night about the need to protect Quebec dairy farmers from the fallout of the proposed new trade agreement with the United States and Mexico. He said on that, too, he will need more information before deciding on next steps.

Speaking to reporters on Tuesday in British Columbia, Mr. Trudeau said he is looking forward to working with Mr. Legault on immigration and issues such as job creation, economic growth and climate change.

“There’s a lot of conversations to be had, and I’m sure we will have disagreements from time to time, but we will do so in a constructive way that serves the citizens that have entrusted us with responsibilities,” Mr. Trudeau said.

The Ontario Premier spoke to Mr. Legault on Monday night. “He’s a great guy, I really like him," Mr. Ford told reporters at Queen’s Park. “We share a lot of the same thoughts. He wants to cut red tape and regulation. He wants to lower taxes. We really hit it off … and I’m quite excited to meet him.”

Mr. Legault said he will have a bill to bring in mixed proportional representation within the year. Only the Liberals, reduced to 32 seats in the 125-seat National Assembly, oppose electoral reform.

He said he intends to raise the legal age for using cannabis to 21 from 18, but will not have time to do that before recreational marijuana is legalized on Oct. 17.

A Quebec nationalist and former separatist, Mr. Legault switched to English to express his intention to be a fair player on the national scene. “I want to assure the rest of Canada of my will to build a stronger Quebec within Canada, in a win-win relationship,” he said. Change will come, but in an orderly manner, he said.

Mr. Legault, who will likely be sworn in before the end of the month, took his inspiration for the ban on religious symbols from a report issued 10 years ago by philosopher Charles Taylor and sociologist Gérard Bouchard on the accommodation of cultural practices in the province.

The report suggested public servants in “coercive functions” should not be allowed to wear religious symbols. (Dr. Taylor has since renounced that view.)

With reports from Laura Stone and The Canadian Press 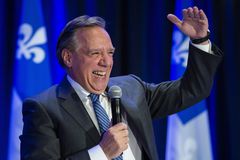 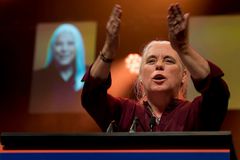 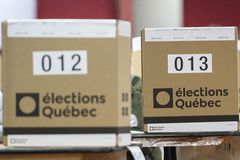