A judge has dismissed fraud and bribery charges against a former SNC-Lavalin Group Inc. vice-president because of unreasonable delays in the case, the second time in two weeks that a criminal case against one of the engineering company’s former executives has been halted.

Quebec Court Justice Patricia Compagnone on Tuesday stayed proceedings against Stéphane Roy, a former controller at the firm. She said delays created by the prosecution in the case were “an example of the culture of complacency” that the Supreme Court of Canada tried to correct with its 2016 Jordan decision, which set firmer time limits on criminal proceedings.

Mr. Roy was charged in 2014 with fraud over $5,000 and bribing a foreign public official in relation to SNC-Lavalin’s business with the regime of Libya’s late dictator, Moammar Gadhafi.

The company itself was charged with fraud and bribery in 2015 in connection with its work in the African country. The disposition of those charges has set off a political earthquake in Ottawa. On Feb. 7, the Globe and Mail reported that senior officials in the Prime Minister’s Office (PMO) put pressure on then-attorney-general Jody Wilson-Raybould to shelve the charges against SNC-Lavalin. She refused. In January, she was demoted to Veterans Affairs; she resigned from cabinet last week. On Monday, Gerald Butts, the Prime Minister’s principal secretary, also resigned, but asserted he had not pressed Ms. Wilson-Raybould.

The dismissal of Mr. Roy’s case marks the third time this month that lengthy legal procedures involving former SNC executives have come to an abrupt and unexpected conclusion.

Last week, a judge threw out obstruction of justice charges against another former SNC executive, Sami Bebawi, and his lawyer, Constantine Kyres, on the grounds that it took too long to bring the case to trial. Mr. Bebawi had been accused of offering a $10-million bribe to have a key witness change his testimony in a fraud and corruption case against Mr. Bebawi. He is now the last remaining former SNC-Lavalin executive facing justice. His trial on charges of bribery and fraud in connection with SNC’s business in Libya is scheduled to begin in April.

Earlier this month, prosecutors struck a plea bargain with former SNC chief executive Pierre Duhaime just as his trial was set to begin on his role in the McGill University Health Centre superhospital corruption case. After Mr. Duhaime admitted to “willful blindness” while his underlings paid $22.5-million to two top hospital managers in exchange for information that would help the company win a contract to build the facility, prosecutors settled for an admission of guilt on lesser breach of trust charges and dropped 15 counts of fraud and using forged documents. He was sentenced to 20 months of house arrest.

The Quebec government has said the company is exposed to a hostile takeover attempt and has vowed to protect the firm.

CEO Neil Bruce has been trying to close the chapter on the company’s past ethics transgressions, which he pins on employees who are no longer with the company, by striking what is known as a remediation agreement with federal prosecutors. Under such agreements, which are in place in countries such as the United States and Britain, corporations agree to pay significant fines and put in place more rigorous ethics and compliance systems in addition to accepting some responsibility for the wrongdoing. In exchange, criminal proceedings against them are suspended and eventually dropped if they fulfill their obligations.

Mr. Bruce is also dealing with problems with SNC’s mining business and uncertainty about its future prospects in Saudi Arabia in a deepening crisis. The company is expected to provide an update on operations Friday.

Mr. Roy’s case was slated to go to trial in May. Charges against him, like those against the company, stem from an RCMP investigation called Project Assistance.

Canadian police acted on information provided by law enforcement authorities in Switzerland who unravelled a complicated web of banking transactions.

Riadh Ben Aissa, SNC-Lavalin’s former head of construction, was nabbed by Swiss authorities in its probe. Once hailed as a legend within the company for his problem-fixing prowess, he pleaded guilty in 2014 to corruption and money laundering related to SNC’s work in Libya and was sentenced to three years in prison. He is now expected to be a key witness against the company should its case proceed to trial in Canada.

Mr. Roy was a vice-president and controller at the engineering giant before being fired in February, 2012. He was acquitted in July, 2018, of fraud-related charges in connection with the construction of the McGill University Health Centre.

Crown prosecutor Frédéric Hivon had little to say after the ruling Tuesday. Asked about an appeal, he replied: “We will take the time to analyze the decision.”

Defence lawyer Nellie Benoit said it is important that her client benefits from the presumption of innocence despite the abrupt end of the case. She said a trial is an opportunity for the Crown to prove its case, but also for the accused to mount a defence. Mr. Roy will never get that chance, she said.

"He deserves to be considered innocent until the end of his days," Ms. Benoit said. 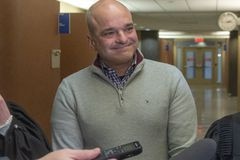