In the middle of raising three boys, Sara Burns decided to go back to school and chase her dream of becoming a police officer.

At 35, the Fredericton native decided to get a criminology degree, and then leave her husband and sons for six months of intensive training at the Atlantic Police Academy in Prince Edward Island.

The driven recruit arrived in 2015 with a maturity that was uncommon among her 60 or so peers – most of whom were about 21 years old – and she was soon named the leader of the cohort for that year, according to Edgar MacLeod, who retired in January as the academy’s long-time executive director.

In an interview at the time with the Journal Pioneer, a local PEI newspaper, Ms. Burns explained her reasoning for joining law enforcement.

“[Policing] is something that I think challenges you physically, mentally and socially; you need to be aware of those components. It’s a really challenging field and to survive you need to keep all of those in check,” she said.

“To do well, you obviously need to maintain a certain standard, and here at the school they provide a lot of the theory and the skill to do that.”

Mr. McLeod, a former president of the Canadian Association of Chiefs of Police, remembered her as physically capable and in possession of all the skills needed to enforce the law in dangerous situations.

“But, beyond that, we also want to train our police officers to be compassionate and understanding of people, be patient with people – that sort of thing – and boy, she had that part down in spades," he said. “You could tell she would treat everybody with respect, not a showboat, she didn’t have an edge.”

On Friday, friends and colleagues mourned Constable Burns after she and a fellow officer were killed in a quiet residential neighbourhood of Fredericton. Two civilians were also killed and a 48-year-old local man was in police custody on Friday evening with serious injuries.

In 2016, soon after graduating from the academy, Constable Burns was hired by her hometown force, of which she had been an auxiliary member.

Earlier this year, Constable Burns narrowly missed being struck by a knife that was thrown out the window by a man at the scene of a domestic incident, Fredericton news outlet The Daily Gleaner reported. 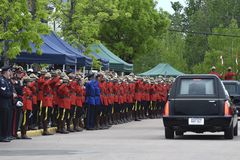 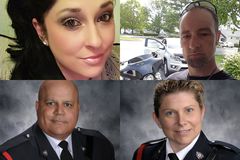 Two officers among four dead in Fredericton shooting; one suspect in custody
August 10, 2018 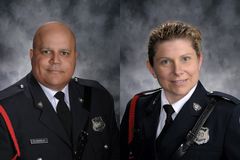