The Fredericton police officer who shot and wounded the man charged with killing four people in August 2018 told a courtroom Monday he opened fire when the suspect, Matthew Raymond, pointed a rifle at him.

“I saw the barrel pointing directly at me,” Const. Brett Arbeau told jurors at Raymond’s murder trial in Fredericton.

The defence has acknowledged Raymond shot the four people in the parking lot of an apartment complex on Aug. 10, 2018, but they argue he should be found not criminally responsible because of a mental disorder.

Arbeau said he was driving the third police car to arrive on the scene at 237 Brookside Drive the morning of the shootings.

He said constables Costello and Burns drove into the driveway of the three-building complex and proceeded to the back of the property, while he said Sgt. Jason Forward stopped to speak with a resident.

Arbeau said he parked his squad car, got out with his carbine, and began to put on body armour when he heard gunshots. “I heard Forward report two officers were down,” Arbeau testified.

Other offices arrived to the scene and Arbeau said police determined the shots were coming from an apartment on the top floor of a three-storey building. He said he saw bullet holes in one of the unit’s windows. He said he was instructed to shoot the suspect if he tried shooting again.

“As I’m watching him through my scope he puts his firearm down,” Arbeau testified. "He looks past me. He scans very, very slowly past me, and he looks from north to south, and as he looks past me, he saw me.

“He quickly looks back at me and locked eyes. He raises his firearm, and as he raises his firearm I saw the barrel pointing directly at me, so I advised: ‘Gun! Gun!”’ Arbeau said. “I pulled the trigger and the gun fired. I saw that he had been struck somewhere in the abdomen. He spun very quickly and went down.”

Arbeau said he remained in position until he was cleared to move by other officers. “It seemed like a very long time,” he said.

Acting Cpl. Jarrett Blackmore was next to take the witness stand Monday. He said he responded to the scene in the police force’s armoured vehicle, which he said was used attend to shooting victims.

Blackmore said he approached Const. Costello, and saw that the officer was dead. He said he noticed a couple huddled by a car and said he helped get them into the armoured vehicle.

Blackmore was among the officers who entered Raymond’s apartment. The officer told jurors he saw the suspect on the floor with a gunshot wound to the abdomen.

Sayad Motallebikia lived in another building of the apartment complex. He told the court that on Aug. 10, 2018, he awoke to strange noises. His wife, he said, looked out the window to see what was going on.

The window shattered, he said. “The shooter was shooting at us.”

Motallebikia said he and his wife dropped to the floor and went to a bedroom where their son was sleeping. “A bullet passed just 10 centimetres above his bed.” 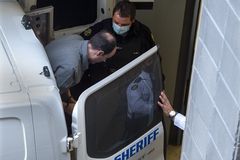