On Sunday night, the tiny town of Branch, N.L., fell silent as people bowed their heads to honour the six men who were lost after their scallop dragger sank last week off the coast of Nova Scotia.

As townsfolk reflected, arcs of Christmas lights hung up on the harbour boats beamed out into the darkness of St. Mary’s Bay, along the southern coast of Newfoundland’s Avalon Peninsula.

Branch is more than 1,600 kilometres from Digby, N.S. – the destination of the ill-fated scallop dragger – but one of the crew was from Newfoundland, said Branch Mayor Kelly Power. Michael Drake, whose body was recovered Tuesday, was from of Fortune, N.L., just 130 kilometres away.

Besides, Power said, coastal communities in Atlantic Canada are all knit together by their reliance on the fisheries and by their often devastating risks.

“Every time they go on the water, there’s a danger,” she said in an interview Monday. “It’s always the risk of our own fishermen leaving their homes, leaving their land here and going out to sea. It’s always the fear of if wind or rough seas will come and if they will return safe.”

Branch has been lighting up the boats in the harbour every year since 2014 to honour the risks and contributions of fishers both lost and living, Power said. The town has just 200 people and normally, she said, most of them come out for the annual boat lighting.

This year was different, Power explained, because they all tuned in to the small ceremony on the wharf from their home computers. And they all had a moment of silence, she said, to honour the men of the Chief William Saulis, the scallop boat that was lost last week.

Meanwhile, in Nova Scotia, the Full Bay Scallop Association as well as Yarmouth Sea Products, the company that owned the 15-metre vessel, set up a fund with the Coastal Financial Credit Union to collect donations for the families of the six men.

Donations can be made starting Monday to the “Chief William Saulis Benevolent Fund” at any Credit Union branch across the Atlantic provinces; disbursement of the funds will be managed by a recognized charitable organization.

A GoFundMe page has also been created for the families and money collected through that page will be added to the main Credit Union account.

The vessel, which operated out of Digby, N.S., is believed to have capsized last Tuesday with the loss of Captain Charles Roberts and crew members Leonard Gabriel, Aaron Cogswell, Eugene Francis, Dan Forbes, and Mike Drake.

The RCMP said Monday its search was continuing but that it suspended its air operation for the day because a helicopter was unavailable.

Police said an unsuccessful helicopter search on Sunday covered about 100 kilometres of coastline between Digby Gut and Harbourville.

On Saturday, the RCMP said it found debris on shore but didn’t know whether it is linked to the missing vessel. The force had said it was working with the Transportation Safety Board of Canada to determine if the debris is related. 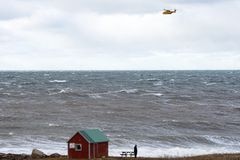 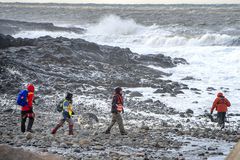