Toronto Police say they have solved one of the country’s most vexing cold cases, the 1984 killing of nine-year-old Christine Jessop, whose disappearance jolted a rural Ontario town and spawned a wrongful conviction that shook the foundations of Canadian justice.

Acting Chief Jim Ramer identified Calvin Hoover, who was 28 at the time of the slaying and died in 2015, as the girl’s killer.

“If he were alive today, the Toronto Police Service would arrest Calvin Hoover for the death of Christine Jessop,” said Chief Ramer during a Thursday afternoon news conference.

The announcement brings partial closure to a 36-year-old tragedy that has ruined countless lives and, at times, brought the criminal justice system into disrepute. Guy Paul Morin, a neighbour, was wrongfully convicted in the case before being cleared by DNA analysis, setting off a public inquiry.

“I’ve dreamt of this day for 36 years,” Ken Jessop, Christine’s older brother, told The Globe. “I’m happy for Guy Paul and everyone else who’s had a finger pointed at them over the years.”

Some even placed Mr. Jessop, who was 14 at the time of the killing, under scrutiny. Mr. Jessop has puzzled over the slaying for years. But finally, he said, the pieces all fit together.

Mr. Hoover was a family friend, he said. His wife, Heather, worked with the Jessop patriarch, Robert.

On the afternoon of Christine’s disappearance, Ken and his mother, Janet, went to visit Robert in jail, where he was serving time for misappropriation of funds. His mother told just three people that Christine might be home alone: Robert’s lawyer, Robert’s boss and Mr. Hoover’s wife.

“He was at the funeral and the wake after the funeral,” Mr. Jessop said of Mr. Hoover’s behaviour after the disappearance.

When investigators visited Janet Jessop on Thursday to give her the news, they told her Mr. Hoover had died by suicide.

He had a criminal record, but the chief said it had “no significance to this investigation.”

Investigators relied on the emerging field of genetic genealogy to lead them to Mr. Hoover. The controversial technique, which has been used to solve dozens of cold cases in the United States, remains relatively untested in Canada.

The method came to prominence in 2018, when police used it to track down the Golden State Killer, arresting 74-year-old Joseph DeAngelo for dozens of rapes and murders carried out in the 1970s and 1980s.

Toronto Police submitted a sample of the suspected murderer’s semen recovered from Ms. Jessop’s clothing to Othram, a Texas-based DNA sequencing company only available to law-enforcement agencies. Othram created a genetic family profile and uploaded it to GEDmatch, an online service that allows users to upload DNA testing data to identify potential relatives.

GEDmatch provides a long list of genetic relations, anywhere from a first cousin and as distant as a sixth cousin. Genealogists then worked on mapping out a family tree.

“Compared to others we’ve worked on, this one was moderately difficult,” said Anthony Redgrave, who worked on the case as lead forensic genealogist at Othram and has since co-founded an independent firm, Redgrave Research Forensic Services. “It took about six months to come up with a candidate for identification.”

Mr. Redgrave said the family tree in this case was obscured by something called endogamy, familial intermarriage that was more common in the 1800s and earlier.

Eventually, his team was able to come up with Mr. Hoover’s name.

“We found records indicating he lived in the area and that his DNA matched,” said Mr. Redgrave. “He was in the right place genetically and physically.”

By chance, an autopsy was conducted on Mr. Hoover after his 2015 death and the province’s central forensic sciences facility still had a sample of his DNA. Once investigators had received a judge’s authorization, they were able to compare the autopsy DNA against the DNA retrieved from Ms. Jessop’s clothing.

“The two of them matched," said Chief Ramer, who requested public assistance in putting together a timeline that might firm up Mr. Hoover’s involvement.

“We’re actually interested in learning a lot about Mr. Hoover over his lifetime from 1984 until his death in 2015,” he said. “There’s still much work to be done.”

Genetic genealogy has been criticized for privacy reasons. Staff Superintendent Peter Code emphasized that it was used to generate leads, not as evidence. “We are utilizing it as an investigative tool, as a technique, that can give us a list of potential persons of interest,” he said.

On the morning of Oct. 3, 1984, Christine stepped off a school-bus outside her family home in Queensville, Ont., about 60 kilometres north of Toronto. She was never seen alive again.

A wide-scale search turned up nothing until New Year’s Eve, when a farmer discovered her remains in a field 50 kilometres away in Durham Region.

A Durham police investigation soon focused on one suspect, Mr. Morin, who lived with his parents in a small home next to the Jessops. He was acquitted at a 1986 trial before being convicted on retrial in 1992.

The judgment came under intense scrutiny in the media and Mr. Morin was released on bail. Shortly before his appeal was set to begin, investigators ruled him out as a suspect using advanced DNA analysis conducted by a lab in Boston.

Mr. Morin said in a statement Thursday he was relieved for Christine’s family, hoping they’d have some peace of mind. “When DNA exonerated me in January, 1995, I was sure that one day DNA would reveal the real killer and now it has,” he said.

His wrongful conviction sparked a public inquiry that accused police and the prosecution of “tunnel vision of the most staggering proportions” in their pursuit of Mr. Morin.

The inquiry, helmed by Fred Kaufman, a former Quebec Court of Appeal judge also found an array of errors in the prosecution, including inadequate disclosure of evidence and inappropriate use of jailhouse informants.

“The Police and Crown have even more to answer for now,” said former Globe and Mail justice reporter Kirk Makin, author of Redrum the Innocent, an exhaustive chronicle of the case. “They refused to accept Guy Paul Morin’s exoneration. Each and every one of those people should get up today and tell the world they massively screwed up.”

With reports from Stephanie Chambers and Colin Freeze 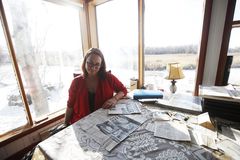