A celebrated Canadian poet has cancelled a lecture about Indigenous justice issues at the University of Regina following outrage over his working relationship and friendship with the killer of a local First Nations woman.

George Elliott Clarke was to deliver the Woodrow Lloyd Lecture on Jan 23. The talk was titled “‘Truth and Reconciliation’ versus ‘the Murdered and Missing’: Examining Indigenous Experiences of (In)Justice in Four Saskatchewan Poets.”

Indigenous leaders and some faculty members urged the university to cancel it because of Clarke’s association with Stephen Brown, who changed his name from Steven Kummerfield.

Brown and his friend Alex Ternowetsky were convicted of manslaughter in the 1995 beating death of Pamela George. Brown was sentenced to 6 1/2-years and was granted parole in 2000. He now lives in Mexico.

Clarke, a former parliamentary poet laureate, initially told CBC News he would not pander to “so-called intellectuals” and “may or may not” read a poem by Brown at the lecture.

On Thursday, he issued a statement saying he would not be citing Brown’s poetry “because of my sensitivity to the feelings of the survivors of his victim.” Clarke said he found out about Brown’s crime last September and it changed his opinion of him.

Then, on Friday, Clarke said he would withdraw from the lecture.

“I never intended to cause such anguish for the family of Pamela George and the Indigenous community, and for that I am truly sorry,” he said in a statement.

“I am a mixed Black and Indigenous writer and scholar, and my advocacy for justice for Indigenous Peoples and People of Colour in Canada must never be in doubt.”

The university initially said cancelling the lecture would go against its principles. But on Friday, it admitted its decision brought back painful memories.

“The University of Regina is deeply committed to honouring the treaties, supporting truth and reconciliation, and creating a safe and welcoming campus for Indigenous students, staff and faculty,” it said in a release.

“(It’s) also committed to the principles of free speech, thought and expression … Balancing these two commitments can, at times, create challenges.”

The university said there would be no replacement speaker and that it is reaching out to members of the Indigenous community.

Misty Longman, manager of the university’s ta-tawaw Student Centre, said cancelling the speech was the only option.

“Although I did feel relief, I was exhausted and angry that it had to get to this point.”

Longman said it’s heartbreaking that no one involved in the event thought to speak with George’s family – “just providing that initial heads up that ‘this is coming and this is going to be triggering and it may harmful for you.“’

George, a mother of two, was a member of the Zagime Anishinabek, formerly called the Sakimay First Nation, east of Regina.

Her killing and the ensuing trial was a painful time for many Indigenous people in Saskatchewan, who were appalled by what they saw as soft sentences for the white, well-off offenders. There was also anger at Justice Ted Malone, who reminded jurors in his final instructions that George was a prostitute.

Heather Bear, vice-chief of the Federation of Sovereign Indigenous Nations called it an “ongoing travesty of justice” in a statement Thursday.

“It is still a painful memory. I have met the daughter that these men left without a mother and seen the very real impact this injustice has had on this family.”

Clarke discussed his conflicted feelings about Brown, whose work he has edited, at a talk at John Cabot University in Rome late last year.

“My friend ended up serving only 3 1/2 years because of a sexist and racist judge who decided that the victim, an Indigenous woman, a sex worker, partly deserved the rape and death at the hands of two young white men,” Clarke told the event, according to a write-up on John Cabot’s website.

“My friend, the accomplice to murder of this woman, is an incredible poet … He is a fairly kind man, who has paid his debt to society as the saying goes, and so should be left to live his life.” 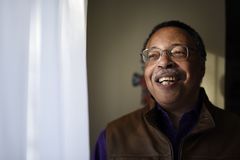