A Saskatchewan farmer who was acquitted last month in the fatal shooting of a young Indigenous man is to be back in court April 16 to face gun charges.

Gerald Stanley was charged in November 2016 with two counts of unsafe storage of firearms and his case was up Monday in a North Battleford, Sask., courtroom.

The charges relate to the police investigation that began after Colten Boushie, 22, was shot and killed on Stanley’s farm in August 2016.

Stanley wasn’t in court nor was his lawyer, Scott Spencer, who called in for the proceeding.

The Crown asked for more time in the case.

Some of Boushie’s family were outside court holding signs that read ”Justice Against Institutional Racism” and ”Blood On Your Hands.”

Boushie’s mother, Debbie Baptiste, poured a bottle of red ketchup onto the ground outside the courthouse to symbolize blood on the snow.

“Shame on you Canada,” she said. “Come on, people. You let a murderer walk away … Treaties are being broken. The RCMP covered up Gerald Stanley.”

Boushie was one of five young people who drove onto Stanley’s farm near Biggar in 2016. His friends testified they were looking for help with a flat tire.

Stanley told the trial he thought they were trying to steal an all-terrain vehicle. He testified he fired warning shots to scare them away and the gun accidentally went off again when he went to pull the keys from their SUV.

Penalties for unsafe storage of a firearm range from a conditional discharge — which means no criminal record — to a fine, to a prison sentence.

According to the provincial court file, one of the charges Stanley faces relates to a number of rifles and a shotgun, while the other was for a Ruger Blackhawk .45-calibre handgun. 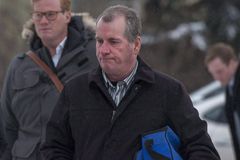 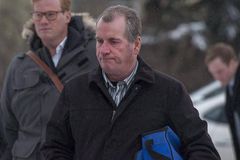 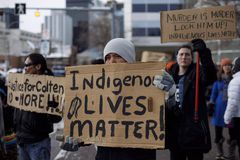